Eagles mailbag: Will fans give Doug Pederson a standing ovation? 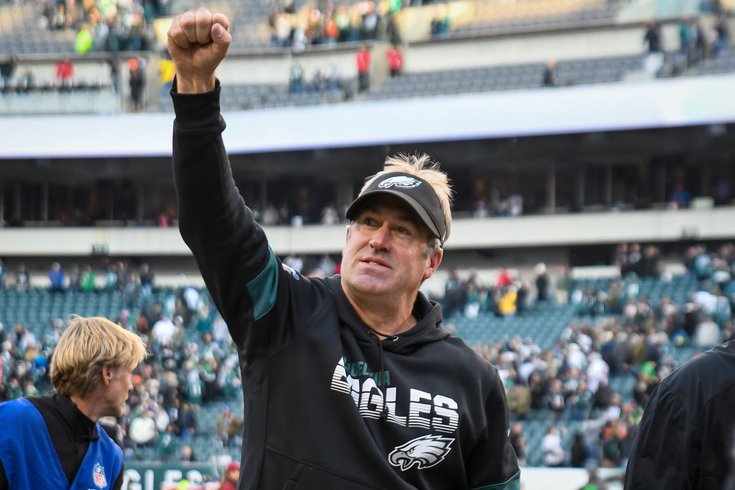 Doug Pederson after an Eagles win over the Bears back in November 2019.

Philadelphia is buzzing about the Eagles, as the Birds have gotten off to a 3-0 start that has them leading the league in total yards of offense. I'm building up the Jalen Hurts MVP case. The pass rush that looked so lifeless in 2021 is back and playing with a "violent style."

A week after a trip down I-95 to see former franchise quarterback Carson Wentz, the Eagles face Super Bowl LII-winning head coach Doug Pederson and the Jaguars on Sunday. Emotions will be even more heightened than they were in Week 3.

As a writer, I'm thankful that things are never boring in the Eagles' world. There's no better time with the hype around the city to answer some readers' questions for a new mailbag.

@NegadelphianNorm: Doug's gotta get a standing O when he comes out right?

@FrednewF1fan4: Doug Pederson will get 100% cheers Sunday right? He deserves it.

Anything less should be considered embarrassing. I know he's no longer a part of the organization. Eagles fans will have their attention on beating Pederson, as will the entire Eagles roster. I'm not advocating for those in the stands at Lincoln Financial Field to cheer for Pederson's offensive scheme if Trevor Lawrence throws a touchdown to Christian Kirk. Before kickoff though? Eagles fans owe everything to that man and they should treat him with the proper reverence for the first coach to bring the Lombardi Trophy to Philadelphia.

Though I have no inside info as to their plans or even if they have plans at all, the Eagles need to do something before the game to honor Pederson. A video tribute would work. Again, I'm talking before the game. Once that whistle blows, both fan and team mindset should be "Eagles vs. Everybody." Tens of thousands of people are going to walk by a statue of the dude heading into the stadium. Are they going to pretend that Pederson didn't deliver the greatest day of their lives as Philly sports fans?

I will be on the "Doug Pederson" beat this week and there will be Doug content from me leading up to and after Sunday's game. I don't want to repeat the same things five hundred times, but my common refrain will be something along these lines:

Doug Pederson took a backup quarterback who nearly quit football a year prior to the Super Bowl and scored 41 points on the greatest defensive mind to ever live.

Heroes get remembered, but legends never die. The Eagles may win five more Super Bowls in my lifetime. They may win zero in the next 100 years. Regardless of the way the future of the Eagles shakes out, remember the past and the way that Pederson played a heavy hand in forever changing the culture of Philadelphia.

Think about your Super Bowl party and screaming and jumping and crying with your family and friends. Stand up and clap for this guy for 30 seconds before sitting down and settling in for the game itself. It's the least you can do.

@EaglesLiker: Assuming health, could we be favored in every game this season?

If I was good at predicting the betting market, I would've moved to Las Vegas after college.

In an article released on The Athletic on Monday, a statistical model from contributor Austin Mock actually said the Eagles will be favored in all of their remaining games. Their highest projected spread is "-8.3" for their home Week 8 matchup with the Steelers. The lowest one is "-0.8" against the Colts in Indianapolis in Week 11.

The two toughest games remaining on this schedule are this Sunday against a Jaguars team that's top five in both Offensive DVOA and Defensive DVOA on Football Outsiders and then a Week 12 home Sunday Night Football game against the Packers. I don't know how Green Bay's season will transpire. Perhaps Aaron Rodgers is retired and living on a mushroom farm by late November, but that game being at the Linc will make the Birds favorites. It might not have been the case if the game was at Lambeau Field.

Playing six-dimensional mental chess, I could see the Eagles being underdogs in Week 18 even though it's a home game. The Eagles might be resting their starters if they're locked into a specific playoff seed, maybe even having secured a first-round bye already, against the Giants.

@dansbadtweets: I'll preface this with "I am not worried," but when do you think is the point to be concerned with the lack of 2nd half scoring punch?

I'd caution Eagles fans to worry about this when they're not building three-score first-half leads and still winning by double digits. Credit to the team's defense for remaining relentless in the Minnesota and Washington games for sure here. When it comes to the postseason, however, this isn't going to cut it when matched up with the sport's best teams.

Ride the wave until then!

@PhilaBCoulter: Which has been the bigger Pederson-related surprise so far: The coaching gap between him and Urban Meyer, or how little attention he got in the interview process this past offseason? He essentially did like 3 or 4 cursory interviews before the Jags gave him a serious look.

Contrary to what Michael Lombardi might think, Urban Meyer is actually the worst NFL head coaching hire of the last couple of decades, not Pederson. If a former megalomaniac college coach ruins your professional sports team, just hire Pederson to clean up their mess. Emotional intelligence: kind of important!

As for the second part, Pederson seemed to be an afterthought during this hiring cycle, absolutely. He was an afterthought in the 2016 hiring cycle too! The Eagles wanted to hire Ben McAdoo over him, but he turned them down. Jeffrey Lurie and Howie Roseman had to settle for Pederson. USA Today ranked Pederson as the worst of the seven new coaching hires that offseason, worse than even Chip Kelly. The six guys ahead of Pederson combined for a single playoff win in those new jobs. Pederson had three in the 2017 playoffs alone.

Count out Doug Pederson at your own risk.

I'll go with the latter as the bigger surprise because I knew Pederson wouldbe lightyears ahead of Meyer.

@_snacks5: What is the ruling on (either team) running the Philly special Sunday?

Love this question. It's just so on-brand for both Pederson and Nick Sirianni. The latter ran one in Week 2 on fourth and goal last season in an ultimate "please love me, Philadelphia" move that didn't pan out. It's okay, Nick. They're loving you now.

As for a "ruling" in the sense of whether it's a violation or okay or too much? At least one team should run it. I could see Pederson doing it to get the last laugh on the organization. I could see Sirianni, perhaps having an extra bit of juice given that Pederson accomplished in Philadelphia what he's trying to do this season, wanting to pull that one out.

Can a sportsbook do an over/under on 2.5 players to attempt a pass on Sunday? I'm going to steal that for my weekly Saturday over/unders feature.

@GoodhartJustin: Do you think it’s more or less likely the Eagles will be undefeated at the bye?

If Dak Prescott was fully healthy entering this season, I might have picked Dallas in that Week 6 Sunday Night Football game right before the bye. Prime time games against the Cowboys have had bad energy in recent years. With either Cooper Rush or a severely hampered Prescott under center, however, I'll be predicting an Eagles win.

Sunday is the biggest obstacle. Pederson has the Jaguars exceeding expectations three weeks into the 2022 season. Lawrence was once the top-overall pick for a reason. That's first and foremost for the Eagles. Take down the man who brought a parade to Broad Street, make quick work of a combustible Cardinals team and then come back home for a raucous late-night crowd against a bitter divisional rival.

I'm going more likely than not!

A 6-0 Eagles team heading into the bye? Early February flights to Phoenix from PHL will be booked.