Eagles over/unders: How many fans will take over FedEx Field? 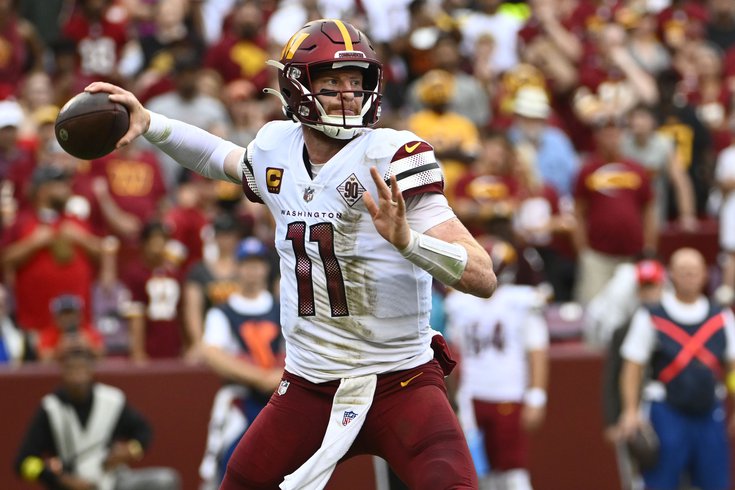 Maybe you've heard about this: Former Eagles franchise quarterback Carson Wentz is facing his old team on Sunday. The Birds will travel to Landover, Maryland to square off with the Commanders, looking to improve to 3-0 and continue showcasing that they're true NFC contenders. Given that it's a divisional game and obviously because of the opposing QB, it's a huge matchup. With the hype around the team, this weekend should have Eagles fans continuing riding high when the the team finally goes against the guy who used to be The Guy.

As I do before Eagles games, I'm going to hit you with five over/unders for Sunday.

Since Wentz entered the league in 2016, he's fumbled 67 times. That numbers just includes fumbles overall regardless of which team recovered the ball. That's more than anyone in the NFL during that time frame (via Stathead). In his final year in Philadelphia, Wentz led all QBs with 15 interceptions despite playing in just 12 games. Wentz's erratic play that has him shifting between high highs and low lows makes him susceptible to turnovers when it tries to do too much and it backfires.

What will his ball security be like against the Eagles' defense? Seven of the Eagles' 11 defensive starters from Week 2 were once teammates with Wentz. They're going to be jonesing to get in on the turnover fun. So far in 2022, Wentz has thrown three picks and fumbled once (Washington recovered it). What will happen on Sunday?

I can see Wentz, as I alluded to, trying a bit too hard to own his old squad and forcing a throw or two where he shouldn't, resulting in an interception. I'd expect at least once. Maybe a lost fumble too if this defensive line decides they actually want to get after a QB? I'll go over with two.

Through two games, Jalen Hurts has four total touchdowns: one passing and three rushing. He may be grading high as a passer right now, but the passing TD numbers are never going to be huge for him because of the way his legs are such a huge factor in the red zone. Hurts' 13 rushing touchdowns are tied for the fourth most in the NFL since the start of last season (via Stathead). It might just be easier for the Eagles bulldoze their way into the end zone with Hurts when he tucks the ball.

I'll say Hurts goes over, but it's an inverse of his touchdown splits from Week 2 with two passing touchdowns, one to A.J. Brown and one to Dallas Goedert, and then one rushing TD.

In the Eagles' Monday Night Football win over the Vikings at least four pass-catchers had 69 receiving yards:

Will there be a repeat performance against Washington? I say no. I'm predicting that Brown and DeVonta Smith top that total, but Goedert and Watkins fail to reach the 60-yard mark.

Rookie wideout Jahan Dotson out of Penn State looks like the real deal. The 16th pick in this year's draft, Dotson already has three touchdowns on the season. Dotson ran a 4.43 40-yard dash at the 2022 NFL Combine and should be a legit deep threat for years to come. His longest catch so far this year is 40 yards. Can he match or top that on Sunday? I'll lean no, but he sure can still do damage against this defense, regardless of how good the secondary played against Minnesota.

Knowing that it's about a three-hour drive to Landover, Maryland, the hype around the Eagles and that it's Wentz's first game against the Birds, I expect there will be a lot of Eagles fans at FedEx Field. FedEx Field capacity is 82,000. Is 25,000 a realistic number of Eagles fans who could attend the game? I have zero clue, but I'll just smash the over anyway because it'd create a fun environment for Delaware Valley residents.