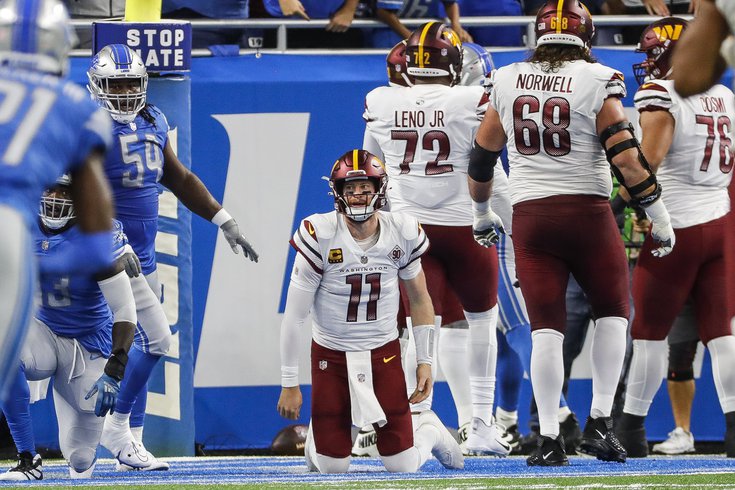 The Eagles need to allow Carson Wentz give them the ball.

After their Week 2 Monday night beatdown of the Minnesota Vikings, the Philadelphia Eagles will make their yearly visit to luxurious Landover, Maryland to take on the Washington Commanders in their first NFC East matchup of the season. Here are our five matchups to watch.

Did you know that after the Eagles traded former franchise quarterback Carson Wentz to the Indianapolis Colts, he only played there one year before the Colts then traded him to Washington? It's true. Wentz is now on another team in the NFC East, and the Eagles will play against him twice per season as long as he (a) stays healthy, and (b) remains their starting quarterback. Wild, right?

In watching his first two games this season against the Jaguars and Lions, Wentz looks a lot like he did in Indy. He makes his share of highlight-worthy throws, sometimes accurate on the layups, sometimes not. And then of course there are some moments sprinkled in where you're like, "What the hell was that?" He's not as bad as he was in his final season in Philly in 2020, and he's certainly not the MVP-level player he was in 2017. He's something in between, but it feels like he still thinks he's the 2017 version, which gets him into trouble.

His stats, in print, look pretty good. He's 57 of 87 (65.5%) for 650 yards (325 per game), 7 TDs, and 3 INTs. His 7 TDs tie him with three other quarterbacks for a share of the league lead, however, his 3.4% INT rate (small sample size alert) happens to be the same as it was in 2020, when he led the league in INTs despite getting benched for the final four games. It should be noted that all three of his INTs this season have been his fault.

The Eagles need to force the "What the hell was that?" moments, and they can do that with pressure. Wentz's worst trait remains his lack of pocket presence, as shown in this Twitter thread from his game against the Lions.

One of my favorite Wentz pocket presence quirks is that once he either avoids an edge rusher, or an edge rusher runs by him, it's as if he believes that that player no longer exists, and won't continue to keep trying to get after him. He did it throughout his career in Philly, and it has carried over into Indianapolis and now Washington, with an example shown in the Twitter thread above.

Normally, you don't want your edge rushers getting too far up the field and simply getting escorted around the bend, taking themselves out of the play. Against Wentz, Haason Reddick and Josh Sweat should not feel the need to try to flatten their path to the quarterback as much as possible. Taking wider paths to Wentz can be just as effective. If you get in behind him, Wentz will eventually drift back in the pocket into strip sack opportunities.

The plan should be to enclose him in the pocket, and whenever a lineman is within striking distance, tackle the football, not the quarterback, because he is one of the worst in the league at protecting it.

Marlon Tuipulotu and Javon Hargrave have each helped cause interceptions this season when they have gotten hits on opposing quarterbacks, and Fletcher Cox had a great game Monday night against the Vikings. The interior of the defense has made some plays. They need to step it up and push the pocket against a quarterback who is prone to putting the ball on the turf.

Schweitzer missed the Lions game with a hamstring injury, and Roullier injured his lower leg on the next-to-last Commanders offensive play of the game. The offensive line looked like this to close the game:

Wes Martin was a practice squad call up.

Heading into Week 3 against the Eagles, Roullier is now on injured reserve, and Schweiter's status is not yet know. If Schweitzer can go, he'll likely play center, with Turner starting at RG. That's at least a semi-competent lineup. If Schweitzer can't go, either Wes Martin or Nick Martin, who the Commanders signed on Tuesday, would start at center.

3) The Eagles' cornerbacks vs. the Commanders' receivers

Th Commanders have a nice trio of receivers in Terry McLaurin, Curtis Samuel (who is now healthy and finally contributing), and impressive rookie Jahan Dotson. They also have Logan Thomas back and healthy at tight end, and a couple of running backs in Antonio Gibson and J.D. McKissic who are quality pass catchers out of the backfield.

Those six players all have at least 74 receiving yards through the first two games:

In past years, McLaurin was really the only player the Eagles had to worry about in Washington's passing attack. He remains their most dangerous weapon, by far, but the supporting cast has shown that they can also make plays. The ball will get spread around more now in this Commanders offense.

4) The Eagles' offense vs. the Commanders' linebackers

There aren't many teams that would trade their linebacker situation with the Commanders'. Their best linebacker is... um... Cole Holcomb? He leads their linebackers in total snaps. The other starting spot was won by 2021 first-round pick Jamin Davis, who disappointed as a rookie. He beat out borderline 53-man roster-worthy guy David Mayo.

The middle of the field was wide open for the Lions on Sunday in the passing game, and Detroit also got some big runs between the tackles. The Commanders are in a tough bind in this matchup. If they play man, they're susceptible to getting gashed by Jalen Hurts on QB scrambles. If they play zone, Hurts has shown so far this season that he can be effective working in the middle of the field, and he has the horses to do it, in A.J. Brown and Dallas Goedert.

The Birds' game plan should center around exposing Holcomb, Davis, and Mayo.

5) Lean on the rushing attack

The Commanders are allowing 7.5 yards per rush, worst in the NFL. The Eagles ran for 356 yards in two games against Washington a season ago. So, you know, there should be some opportunities to do damage on the ground.