After a quiet Week 1, the second-year receiver got involved in the offense right away. 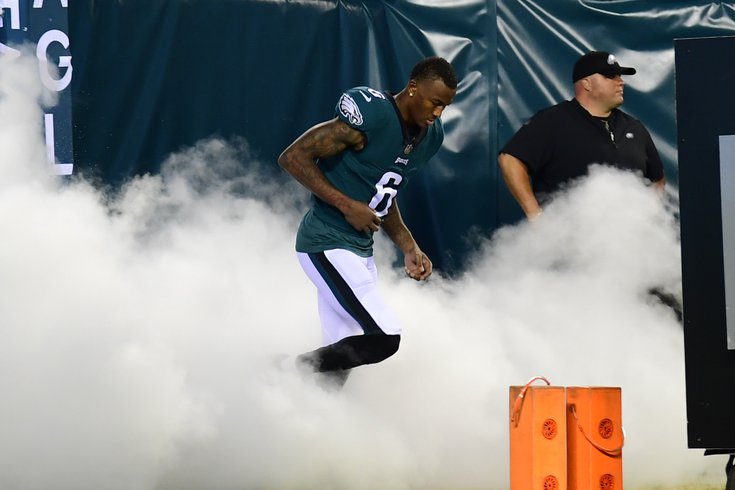 On the Eagles' first offensive play of Monday night's 24-7 victory, he connected with an open DeVonta Smith on a quick five-yard gain.

It wasn't a game-breaking moment, but it marked a positive start for an 11-play, 82-yard scoring drive, one that would set the tone for the offensive outburst to come.

Just over a week after Smith's quiet day on the stat sheet in the opener at Detroit, the second-year receiver went into an electric Lincoln Financial Field and caught all seven of his targets in a statement win over the Minnesota Vikings, with his 80 yards receiving only second on the night to teammate Dallas Goedert's 82.

The lack of touches the week before didn't matter, on Monday night, Smith was sharp, engaged, and more importantly open.

He had at least one reception on each of the Eagles' four scoring drives, with a few of those plays keeping possessions alive.

"Like I said, when the ball comes to you, you gotta make the most of your opportunities," Smith said postgame, repeating his sentiments from earlier in the week. "Just going, us as an offense out there executing, everybody got their opportunities and made the most of them."

Facing a 3rd and 5 from the Eagles' 23 with under two minutes to go in the first quarter, Smith broke toward the left sideline from the slot and hauled in the pass from Hurts for an eight-yard gain and a fresh set of downs. Combined with quick completions to Goedert (though this was negated on an ineligible receiver call) and A.J. Brown in the plays that followed, the sequence kept the Vikings honest underneath, opening up the field for the 53-yard touchdown bomb to Quez Watkins that capped off the drive.

They definitely fixed that, not just for Smith, but for nearly all of their pass-catching options.

Eight players made at least one reception Monday night compared to just five in Week 1 at Detroit. Granted, there wasn't any outright dominant receiving performance like Brown had against the Lions and the run game did take priority in the season opener.

But it was clear that the passing game was much more efficient Monday night, starting with Smith's involvement from the jump and ultimately marked by Hurts' finest performance yet as a starting quarterback.

"You never know who's game it's gonna be," Smith said. "Today it just happened to be everybody. Everybody did what they were supposed to do and next week, you never know. So it's just being ready when you're number is called and making the most of your opportunities."