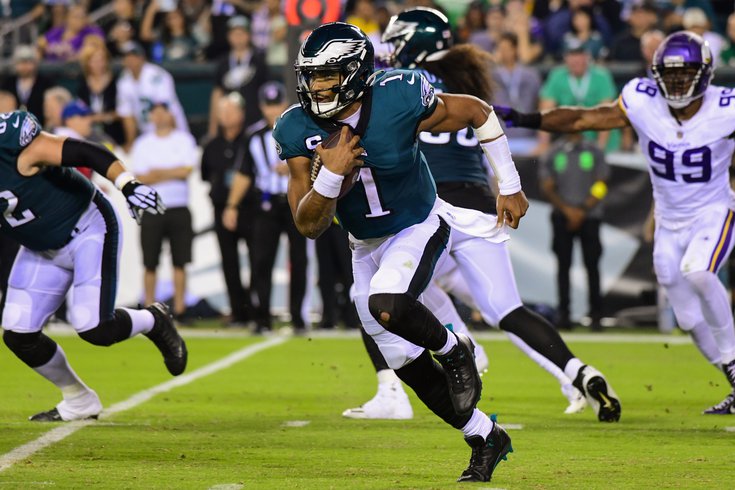 The Eagles are the favorites in the NFC.

There, we said it.

After a dominating statement win over a Vikings team with playoff expectations itself, it would be hard to overstate just how good the Eagles have looked through two games this season.

Yes — it's only been two games — but the team has already hit a bevy of important benchmarks this young NFL season and the entire sleep deprived fanbase will have no problem floating through work Tuesday morning.

They handled the Lions in their opener, but many worried about the defense heading into a matchup facing Justin Jefferson and the Vikings — fresh off a 184-yard, two-touchdown performance against a Packers squad thought prior to the season to be better than the Eagles. Under intense pressure to allow less than the 35 points the Birds allowed in Detroit, Jonathan Gannon's defense more than responded.

In Monday night's win, it wasn't just the offense (more on that in just a second) that blew the roof off the (admittedly roofless) Linc. The defense shut down the high powered Vikings offense to the tune of just 264 yards from scrimmage (80 of which came in garbage time at the end of the fourth). They held first round fantasy talent Dalvin Cook to just 17 rushing yards and 19 through the air, and the aforementioned Jefferson to a relatively tame 48 yards on six catches.

With a single touchdown drive permitted in the first half, the 'D' buckled down with its back against the end zone in the third quarter, squashing Minnesota's momentum with a Darius Slay pick in the end zone.

A drive later, with the Vikings trying to score again (following a blocked field goal), Avonte Maddox did this:

And then, a third time, the secondary snatched it away again with Slay keeping the Vikings from scoring yet again and avenging a Jalen Hurts INT with this ridiculous pick:

We should also mention that the Birds were able to add three sacks to their ledger, though the pass rush does admittedly leave some to be desired.

Jalen Hurts is an absolute monster. We would probably slow your web browser to a crawl if we embedded all of his highlights from Monday's glowing performance, but it is almost as if he heard every criticism and proved them wrong, one by one.

He threw it deep, with accuracy. He threw it over the middle. He threw with accuracy, completing his first 11 passes in a row. He minimized mistakes, getting sacked only once and turning it over once, after Kenny Gainwell bobbled a pass that led to an unlucky interception. And he was also his usual scrambling self, collecting 57 yards on the ground on 11 runs, including this insane touchdown run and a second TD run later. And he went 26-for-31 for 333 yards through the air.

If Hurts, who has one year left under his rookie contract, gets paid like a stud, it'll be this game that vaulted him to earn what should be a nine-figure contract.

The offense is loaded, as shown through the air and on the ground — they ran for 163 yards. The offensive line is a brick wall. Hurts has a plethora of talent to whom he can sling the football. But it's not just their play on the field through 120 minutes that has them playing like the best team in the conference...

The Eagles are one of just three undefeated teams in the NFC (after just two games!).

The first is the Buccaneers, who had the Eagles number last postseason but look a little less intimidating early this season, without Rob Gronkowski, injured Chris Godwin still working to full strength, and 45-year-old Tom Brady looking a little bit like father time might be starting to finally strike. A healthy Bucs team could be a real contender, and they have a very good defense.

The Giants are the second unbeaten team in the NFC, having handled the lowly Titans and Panthers. They are playing well but are not on the Eagles level.

The Packers are 1-1, and are likely the Eagles' biggest competition in the NFC assuming Aaron Rodgers gets on the same page with his receivers. The Rams are 1-1 but are looking like a shadow of their Super Bowl-winning selves. And the Niners, also 1-1, lost their opener to the Bears and are back on the Jimmy 'G' train.

The Eagles, at least on paper and through two games, have shown more talent all around.

If you had to re-do your win/loss predictions for the rest of the regular season, how many losses do you see in the schedule below:

If Dak Prescott remains out in Week 6, the Eagles should be favored in likely eight games in a row, setting up a big test against the Packers at home in Week 12. And then three more cupcakes before the potentially fully healthy Cowboys in Week 16, and the talented but less than impressive so far Saints in Week 17.

There is a reason they play the games of course, but the Eagles look like they could breeze to double-digit wins, and we'll have to check in on their NFC title odds when they're updated. Hope you got your money in early.