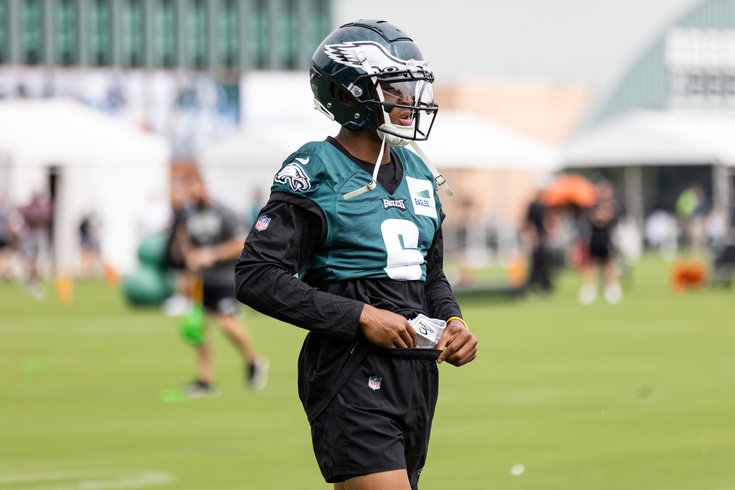 The Eagles traded up for DeVonta Smith in the first round of the 2021 NFL Draft and then he proceeded to set the franchise rookie record for receiving yards. Despite being 25th in the league in passing attempts last season, Smith still hauled in 64 passes for 912 yards. Given his Heisman Trophy-winning college career and the pure skill on display in 2021, it's clear that Smith has the makings of a great wideout in the NFL.

That rationale is sound, but Smith had a blank stat line in the Eagles' Week 1 win to kick off the 2022 campaign. It marked the first time across college and the pros that Smith didn't record a single catch. Quarterback Jalen Hurts' focus was swiftly on new star receiver A.J. Brown, who totaled 10 catches fo 155 yards in his Eagles debut. Smith felt like a forgotten man, but I can't envision that being the norm for him this year. His impact will come and could be felt as soon as the Eagles' Monday Night Football bout with the Vikings.

Minnesota is starting Patrick Peterson and Cameron Dantzler at cornerback with former Eagle Chandon Sullivan in the slot. Peterson has had a fringe Hall of Fame career, but is no longer the player he was in his All-Pro heyday. Dantzler is a third-year CB out of Mississippi State. It's the smallest of sample sizes, Dantzler was Pro Football Focus' 21st-ranked corner in Week 1. If Peterson primarily sticks Brown, it could open a situation where Smith is matched up with two lesser CBs, a clear advantage for the Birds.

Regarding Smith's zero-catch performance in Detroit, head coach Nick Sirianni spoke to the media last Monday and said, "There [are] so many good things we did, but coming away, you're like DeVonta Smith didn't get any catches. Sometimes you don't feel that in the game. He has to touch the ball. There's no doubt about it. He has to touch the ball, and it's just the way the game went.

"And hey, that's my job, though, to make sure that he gets the touches, and we'll fix that."

Sirianni clarified that Smith is not just a "good playmaker," but a "great playmaker." He's right. Sirianni is a players' coach, always willing to gas up his players and even wear t-shirts featuring them during practices. Sirianni does not want the questions about Smith's role to persist. He knows first hand what type of talent Smith is. I anticipate Sirianni trying to get Smith involved immediately on Monday night, targeting him heavily as Minnesota likely prepares for Brown following his outstanding Week 1 performance. The more Brown balls out and causes nightmares for opposing defensive coordinators, the more it's going to open up Smith's game.

Sirianni's clearly aware of the discussion around Smith. Fans are always going to be happy about a win, but those people who were amazed by Smith as a rookie and bought him midnight green jersey were likely left disappointed last Sunday. The crowd will be rocking Lincoln Financial Field for its first prime time game since last October. An early chunk yard play to Smith for a huge first down will go along way to easing concerns about Smith's role and make this offense more versatile in a huge matchup with playoff implications.