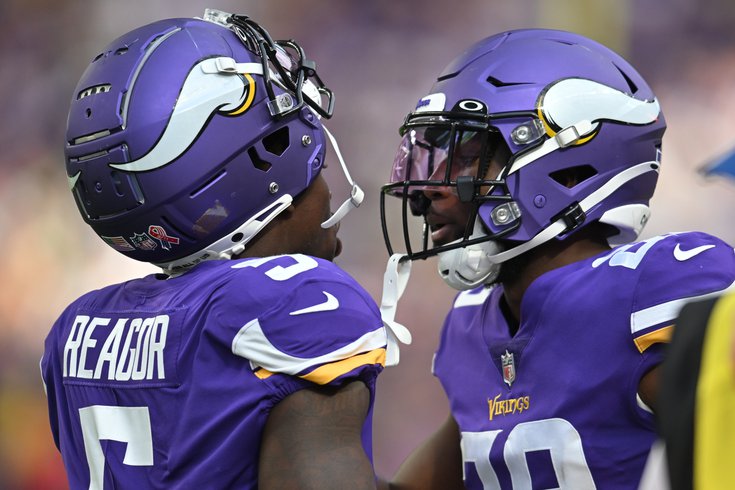 With the  Eagles' home opener not coming until Monday, Eagles fans should be in a position to actually enjoy this NFL Sunday.  There are few stress-free Sundays each year for people across the Delaware Valley. Throw on Red Zone, get your pizza and wings order in and enjoy dreaming of a big Monday Night Football performance.

To prep you for that MNF affair, here are five over/unders for the Eagles' matchup with the Vikings. It's filled with odds about current Eagles, former Eagles and even former future Eagles.

In his Vikings debut, former Eagles wide receiver Jalen Reagor saw zero offensive snaps, but got on the field as a punt returner. He returned one punt for seven yards. Will he get some action on offense for the Vikings? No doubt. Reagor mentioned that his return to Philly is a revenge game of sorts and I imagine the Minnesota coaching staff is cognizant of that and wants to get him involved beyond just special teams.

Will he top his seven-yard performance from last week? I could see the Vikings running a jet sweep for Reagor early in the first quarter. It could be a 12-yard gain. It could be a five-yard loss, putting the third-year player in the red for all-purpose yards. Huge variance at play here.

I'll smash the under here.

Here are the completion percentages from opposing quarterbacks in every game the Eagles lost in 2021:

Putting aside Daniel Jones as an outlier, that chart's not a great look for defensive coordinator Jonathan Gannon!

Vikings QB Kirk Cousins is accurate. He completed a career-high 71.9 percent of his passes in 2021. That's also the number he had in Minnesota's Week 1 win over the Packers. Cousins previously led the NFL in completion percentage in 2015 (69.8 percent).

In his career against the Eagles, Cousins is 6-3 as a starter and has completed 67.2 percent of his passes with a quarterback rating of 104.9. Feel free to go wild with the Cousins jokes about him being a dork and a totally unreliable quarterback come January, but he's good in the regular season and puts up statistics that go beyond his reputation.

Will the pass rush finally wake up after a two-year absence? If they don't, Cousins might feast on quick throws all night.

Cousins hitting the over here isn't a definitive indicator that the Vikings will win, but the QB plays the Birds tough. I think he gets there.

In the Eagles' season opener, 2021 first-round pick DeVonta Smith had zero catches (four targets). It was the only time in his collegiate or pro career that he's had a goose egg in catches and yards. Given Smith's pure talent and skill and the way defenses will start gameplanning heavily for A.J. Brown, that's a performance that will rarely, if ever, be repeated.

I can foresee head coach Nick Sirianni and offensive coordinator Shane Steichen force-feeding Smith the ball early, wanting to get him into the game vibes-wise and ignite what should be a rowdy atmosphere at Lincoln Financial Field.

The Eagles will take shots down field with both Brown and Smith on Monday. I'll say Smith bounces back.

NOTE: 20.5 yards is the line for Smith's longest reception on DraftKings Sportsbook.

Over/under 97.5 receiving yards is DraftKings Sportsbook's line for Vikings superstar wideout Justin Jefferson against the Birds. Seems low! I don't need to rehash the 2020 NFL Draft that will live in infamy for Eagles fans. They get it and can likely feel the type of performance that's inevitable from Jefferson. The over on this is a pretty easy call.

Carson Wentz jerseys in the crowd that fans turned into A.J. Brown jerseys: 49.5

Whether it's with an upscale new nameplate or just some good ol' fashioned duct tape with "BROWN" written on it with a Sharpie, there will be many makeshift No. 11 jerseys on Monday night. I still saw a good amount of Wentz jerseys while attending games as a spectator in 2021, so I expect the names on the back of those numbers to be different come Monday.

As for the number of jerseys itself, I have no idea how to gauge this line. I'm sure there will be a news team interviewing someone in the tailgate lots beforehand who's done this to a Wentz jersey. Maybe it's five people. Maybe it's 500 people. What I do know, however, is that Brown will quickly become the team's new best-selling jersey. The pro shop better stock up.