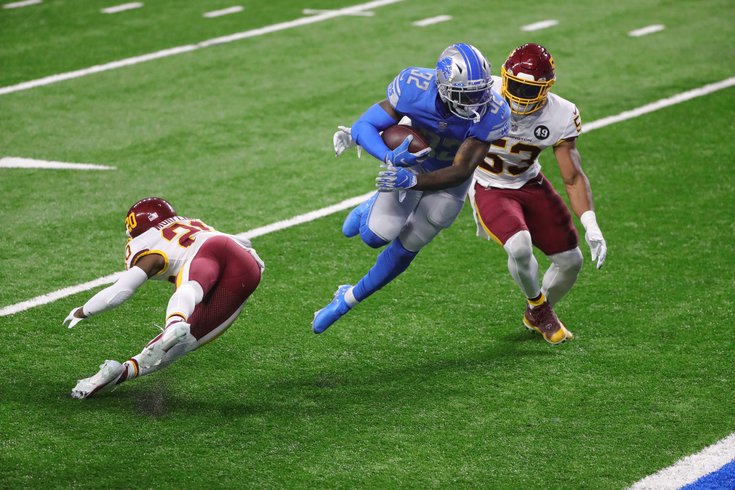 The Eagles will hope D'Andre Swift can do some damage against the Commanders Week 2.

In past seasons, Philadelphia Eagles fans generally rooted for their own team, and kept an eye on the rest of the NFC East. Now that they might be contenders in a bad NFC, it's probably worth paying attention to rest of the conference as well. There are also peripheral rooting interests for Birds fans this season, as they own an extra first-round draft pick in 2023.

• Buccaneers at Saints (1:00 p.m.): The Saints nearly lost Week 1 to the wretched Atlanta Falcons, but they managed to escape with a win. If they're able to also beat the Buccaneers, that would be a highly disappointing outcome for Howie Roseman, though a Bucs loss would be a decent consolation prize.

• Commanders at Lions (1:00 p.m.): It'll be interesting getting a look at the Commanders playing the same team the Eagles just faced Week 1, for comparative purposes.

• Panthers at Giants (1:00 p.m.): The Giants actually have a reasonable chance of starting 4-0, as they have home games against the Cowboys and Bears Weeks 3 and 4.

• Bengals at Cowboys (4:25 p.m.): The Cowboys had about as nightmarish of a Week 1 as imaginable. It would be good for the Eagles if their misery continued into Week 2.

Other NFC vs. AFC games

Anytime an NFC team plays an AFC team, it's best if the AFC team wins, for now. There is only one other interconference game this weekend other than Bengals-Cowboys.

• Cardinals at Raiders (4:25 p.m.): It would also be good for the Eagles if this Cardinals team is a mess by the time they face them in Arizona Week 5.

The 49ers lost to the Bears in a pretty surprising upset Week 1. That was good for most of the conference, including the Eagles. There are a number of games on the schedule this week that pit NFC contenders against bad NFC teams. It's better if the bad teams win.

Those are all double-digit spreads.

The Eagles will play some of these teams later this season. I don't think it matters much who wins these matchups, but they're worth paying some attention to for future reference. Teams that the Eagles play later this year in italics:

The AFC South landing on the Eagles' schedule this season is major advantage. The 2021 AFCS champion Titans might just be bad this season after earning the 1 seed in 2021. They lost the Giants Week 1.