Mailbag: Kirk Cousins and the Vikings are a good measuring stick for the Eagles 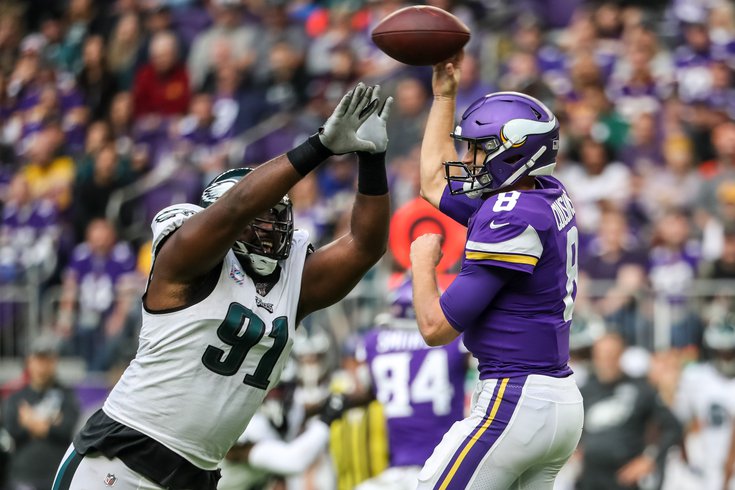 Kirk Cousins beats bad team. Good ones, eh, not as much.

In our Eagles chat on Wednesday, there were a lot of questions that we could not get to in time or other questions we did answer but could use more color. And so, let's do a mailbag post to answer some of the overflow, as well as some commonly asked questions on Twitter and via email. Actually, there were so many good enough questions that this will be Part II of II. You can find Part I here.

Question from Zach: Kirk Cousins is 10-17 in prime time games. The Eagles should be happy to be getting him on MNF. Do you think that kind of trend is on him or just a coincidence with the team and those matchups?

I don't think that the primetime record says much. I don't think he plays badly because it's nighttime or because it's a national audience or something. But I do think that his 10-43 record against teams that have finished the season with a winning record does say something about him. Or perhaps it says something about the teams that he faces. If you beat Kirk Cousins, congrats, you've beaten a guy who typically owns bad teams. If you lose to him, you might not be that great.

Monday night should be a good early barometer for what the Eagles are.

Question from Kendall: Looking at Hurts’ throwing chart, were you surprised by the frequency Hurts threw over the middle? Does that speak to his growth as a passer or the convenience of having someone like A.J. Brown?

He loved the right side of the field, and did not seem comfortable throwing over the middle or to the left.

I thought that during training camp, he did not favor any part of the field over another. In Week 1, here's what his spray chart looked like, via NFL's NextGen stats: 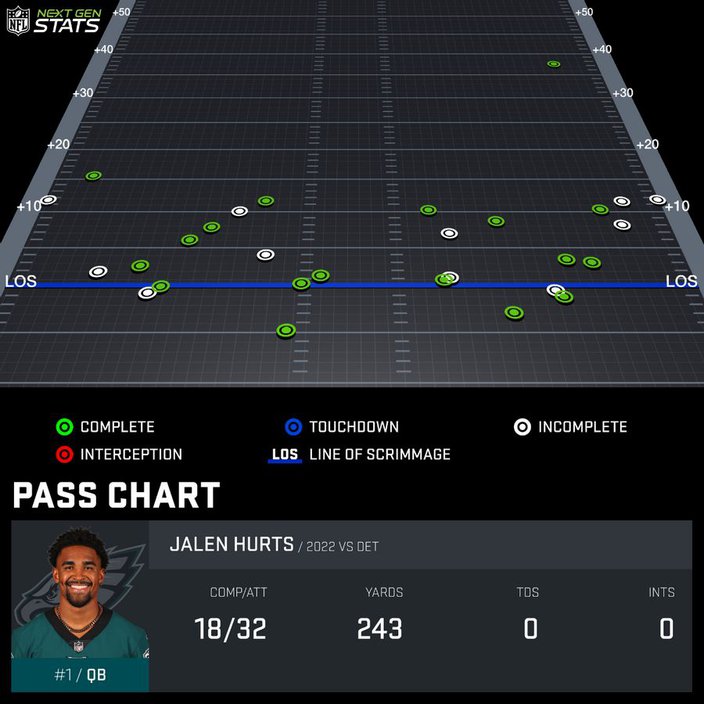 It's just one game, but his balanced use of the field was encouraging.

Question from Justin: Jalen Hurts and Gardner Minshew are both 6'1". How come in your analysis last year you always called Minshew short, but never said the same thing about Jalen?

Lol. Respectfully, this feels a lot like a disingenuous question. The sentiment was never, "Gardner Minshew is short," end of statement. It was always that he's not a physically gifted player, whereas Hurts is in some ways. For example, from a December mailbag last year:

After the Eagles were unable to acquire a franchise-type quarterback this past offseason, it made sense to give Hurts a season to improve, perhaps be a pleasant surprise as a passer, and show that he can be a long-term answer.

A player like Hurts is going to get that kind of opportunity because he has special skills as an athlete. If you look around the league, there's probably only one quarterback with better running ability than Hurts. That's Lamar Jackson. Minshew does not have good physical tools. He's short, slow, and in my opinion, does not have a strong arm, or even an overly accurate arm, at least to the point where his accuracy might make up for his other deficiencies.

Credit Minshew for getting the most out his ability, but he is always going to have a limited ceiling because of his lack of physical attributes. He has great pocket presence, he's crafty and creative in his decision-making, and he rarely turns it over. That makes him very appealing as a backup, especially since he's still on his rookie contract.

But he is what he is. He does not fit the profile of a player that a team should be taking a long, hard look at to determine if he can be a long-term answer, whereas Hurts was at least worth that look after the team whiffed on other options.

Perhaps you only remembered the word "short" and it stuck in your craw for a year, but, you know, there are 230 other words above as well.

Question from Flipadelphia: So realistically, how do you improve tackling... instantly?

Most of these guys have been tackling since they were like 10. There was probably some rust Week 1 after the starters hadn't really tackled at all since last season. While I do think it's cause for concern entering Week 2, I do think they'll be fine soon enough.

Question from SnailWhale: It is crazy that the Eagles passed on Justin Jefferson and that should never be forgiven, but four receivers went before Jefferson so Eagles fans are probably not alone in what could have been.

I had Jalen Reagor as the ninth-best receiver in that class. I had CeeDee Lamb first, Henry Ruggs second, Jerry Jeudy third, and Jefferson fourth. In a very good WR class, I thought the Eagles would have to trade up to get Jefferson. The actual order went Ruggs (12th overall), Jeudy (15th), Lamb (17th), Reagor (21st), and then Jefferson (22nd).

• Ruggs had 469 receiving yards after seven games last season and was on pace for a 1,000-yard season before he killed someone while driving drunk.

I think that as long as the player selected is good, fans are fine with that, even if a better player may have been picked later. Some might grumble quietly (like with the Eagles selecting DeVonta Smith instead of Micah Parsons, for example), but ultimately, good player = 👍.

But also, Lamb/Ruggs/Jeudy were overwhelmingly thought to be the three best receivers in the draft, in whatever order you preferred. Jefferson was widely thought to be a better player than Reagor, who was drafted on one specific trait (speed) that it turns out he didn't really possess, and Jefferson does.

Ruggs is an odd, tragic case, but I would guess that Broncos and Cowboys fans were mostly fine with their selections of Jeudy and Lamb when they were taken, and still have plenty of hope for their futures. The Reagor pick is already a gigantic L.

Question from Pragmatic: Miles Sanders looked great in game one, but I think the RB by committee is great and there is no need to increase his carries, except situationally?

Sanders got 15 touches vs. seven for Gainwell and four for Scott. 15 touches per game would put Sanders at around 250 on the season, should he stay healthy. I actually think the Eagles should be looking to keep that number down a bit, so yes, I agree that there's no need to feed him more than they did Week 1. Maybe in the playoffs.

Question from Millennial: My two favorite Eagles: Who was better in their prime, Cox or Graham? What is left in the tank?

Graham has had a great, long, consistent career, but there's no contest here. Cox was an absolute beast in his prime that opposing offensive coordinators game planned for first and foremost when they faced the Eagles.

Obviously, both of those players' careers are winding down, but I think that Graham has done more to keep his body in shape and as a result probably has more left in the tank than Cox.

Question from cormeagles: Col. Kempski, all the writers you interviewed for the camp series had the Eagles making the playoffs. Did any of them, even off the record, think they wouldn't? Makes ya a bit uneasy...

Ha, do you think that Philly reporters are shy about offering their real opinions?

Question from Alcoholics Alshonymous: When you write your 10 awards after every game, are you writing those like in the line at the airport for away games? When do you find the time to get that out quick?

In the preseason, I'm writing those throughout the game. I'll have those done before the clock hits zeroes, typically. During the regular season, I'm paying more attention to the game and usually don't start writing those until after we've already gone to the locker room for postgame interviews, though I usually know what 10 things I want to touch on. Those usually aren't done until at least two hours after the game is over

Question from Bird Gang: Why does the picture quality on the All-22 that NFL.com makes us pay $100/year to watch suck? Each play is about 12 seconds long and it takes the camera about 5-7 seconds to come into focus so you can see the jersey numbers.

I agree that that's annoying, but that's the least of the issues with NFL+. A few years ago, it was a much better product:

But much worse was that a common complaint among fans last week was that when they went to watch a game live on the app Week 1, they found that they only had access to the radio call of the game, and no video. Like, who the hell in 2022 would pay good money for that?

Before the season began, the PFWA (Pro Football Writers Association) held a call with some dude from the NFL who fielded questions about NFL+. The questions were basically about the points made above. He claimed not to know the answers to most of the questions posed, and said he would follow up, but cautioned that we "may not like the answers." To my knowledge, there was no follow-up.

I get NFL+ for free, but it is such an unusable product that I pay like $12/month for a VPN to trick the NFL's website into thinking I'm in the UK, so that I can use the international version (still called GamePass, the old name for their offering), which I also pay for. That product is also bad, but is at least semi-useable and significantly better than the American version.

And let's be clear. The NFL could very easily make this a better product. A far better product existed a few years ago. For reasons that are unclear, they just, you know, don't, but they sure as hell are happy to take your money for this garbage scam product that they have promoted heavily.