Eagles mailbag: Will the pitchfork-toting angry mob coming for Jonathan Gannon get their way? 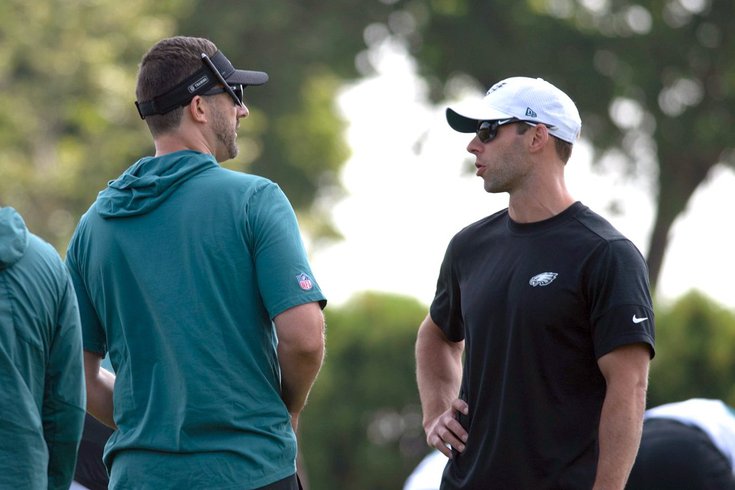 In our Eagles chat on Wednesday, there were a lot of questions that we could not get to in time or other questions we did answer but could use more color. And so, let's do a mailbag post to answer some of the overflow, as well as some commonly asked questions on Twitter and via email. Actually, there were so many good enough questions that this will be Part I of II.

Question from Joe: Could you give me some background on DB coach Dennard Wilson? I'm not saying I'm sharpening a pitchfork for Jonathan Gannon just yet, buuuut....

Let's first note that the Eagles are 1-0, and they are very clear favorites in the NFC East this season. Let's not get crazy.

With that disclaimer in place, there is precedent for an in-season defensive coordinator firing with this team. In 2012, Andy Reid fired Juan Castillo after the team got out to a 3-3 start. Like Gannon, Castillo was in his second season with the team. The circumstances were a different that year, of course. Andy Reid was on the hot seat himself that season, while Nick Sirianni certainly is not, and Castillo's firing could be looked at as a move by a head coach feeling the pressure of needing to win immediately.

The Eagles aren't remotely close to firing Gannon, nor should they be, but if the defense underperforms and the team loses games to less talented opponents as a result, it will be interesting to see what kind of patience Jeffrey Lurie, Howie Roseman, and Sirianni have with Gannon.

As for Dennard Wilson, he made it known that he believes he is ready to be a defensive coordinator in the NFL, and would jump at the opportunity to be one. He comes across as a smart person, and he has gotten good play from his defensive backs since he has been with the team.

Question from DB: Will Fletcher Cox get significant DE snaps with Derek Barnett out?

Nope, I think it's just "next man up," and that's Tarron Jackson. He was a healthy scratch Week 1, but he played in all 18 games last season, improving down the home stretch. I also thought he played well in training camp, though he was a little disappointing in the preseason games.

But I do also think this question is worth taking a moment here to discuss the Eagles' plan for Barnett this season. Prior to the 2022 NFL Draft, it felt a whole lot like the Eagles would have liked to have drafted an edge rusher, but when they determined that anyone worth a major investment was unlikely to make it anywhere close to them at pick 15, they re-signed Barnett to fill out their depth. That plan is now gone. Jackson has a chance to step up and produce in an elevated role, but I suspect that if the Eagles feel like they're thin at DE, they may be exploring trade options in a couple months at the deadline.

Question from Jumbo: Jimmy settle a comment section debate. Would you rather have A.J. Brown or Derrick Henry?

#Analysis: They're all making at least $20 million per year. The highest paid running back in the NFL is Christian McCaffrey, at an APY of $16,015,853, and he's as much of a receiver as he is a running back.

Henry is obviously a great back, and he was an absolute star in 2020, rushing for over 2,000 yards. Of course, the downside with running backs, as has been extremely well documented, is that they have very short shelf lives, and I think we're beginning to see that with Henry, who missed nine games last season and wasn't very effective when he returned for the playoffs.

If it were 1975, I think most teams would rather have Henry. In the modern NFL, Brown is a far more valuable player, certainly long term, and probably also specifically in 2022.

Question from Noah: Over/under: 3.5 catches for DeVonta Smith this week?

Over. I think they'll make sure they get him involved early. Also, DeVonta is good! I think Week 1 was simply an oddity of a game in which his targets were artificially low, and he didn't make good plays on the ball when it came his way. But I have no concerns about DeVonta Smith. He's going to be a big part of the offense this season.

Question from War Koala’s Ukelele: Should we panic about the rookies yet? Jordan Davis had a couple "splash" moments, but wasn't on the field that much and also had some less than impressive moments. He got thrown by Frank Ragnow after showing absolutely zero leg drive - It honestly looked like he was just leaning on Ragnow. I'm not sure I saw Nakobe Dean at all. You have him down for 3 snaps. Cam Jurgens didn't play for obvious reasons. Grant Calcaterra was a scratch. Kyron Johnson didn't make the field at all?

So, first let me address that Davis/Ragnow play. Davis is two-gapping. He's responsible for the gap on each side of Ragnow, and he's waiting to see which way the running play is going, and once that's determined, he'll try to shed the block and make the play. This was a strong, veteran block by Ragnow. He knows where the runner is going, and when Davis breaks in that direction Ragnow uses Davis' own momentum against him and gets him to the ground. Ragnow very clearly won this rep, but I don't think it is as egregious as it is being made out to be.

On a side note, watch T.J. Edwards in that clip. He smashes the tight end, and then makes a physical tackle.

As for the rest of the rookies, their playtime was as expected, with perhaps the exception of Calcaterra, who I did not see being inactive in favor of Noah Togiai.

Comment from Eagles 1018: Just wanted to give a h/t to Marlon Tuipulotu on that play where he got a great rush on Jared Goff and helped rush the throw. Without that, Kyzir White doesn't tip the ball to James Bradberry, and the Eagles might be 0-1 right now.

Tui made plays like this all throughout training camp.

Question from Pragmatic: Are the Eagles going to finish in 3rd behind the Commanders and Giants who both looked DOMINANT!

I'm sensing some sarcasm here. Commanders and Giants fans were quite pleased with their teams' wins Week 1, and, well, they should be! Neither fan base has had much to be excited about in recent years. A 1-0 start represents a feeling of, "Oh hey maybe I can actually enjoy the football season for more than a month."

Both of these teams have a chance of a compiling some early wins this season. A look at the first four games for each of them:

The Giants should actually be favored in each of their next three games, amazingly. The Eagles' matchup in Washington Week 3 is going to be a huge early game this season.

Question from Steve: The only teams on the Eagles schedule who won in Week 1 were the Commanders, Giants, Saints and Vikings. Is this game against the Vikings the Eagles' toughest of the season?

I still believe their game against the Packers will be their toughest opponent. But since you mentioned the schedule, let's take a look at their remaining opponents, and I'll note if I think each team's stock is up or down after Week 1:

So I guess I think 8 of their remaining 16 games look harder to some degree than they did before Week 1, and 8 look easier. I will note that four of the games on their schedule — The Cowboys x2, the Cardinals, and the Titans — look significantly easier.

Question from Kevin: Please tell me we are getting Joe Buck and Troy Aikman on Monday night, and not Steve Levy and Dan Orlovsky.

Question from The Kenny: What is your liquor of choice for an Old Fashioned?

Bulleit, but I'm flexible. I feel like Old Fashioneds are like the pizza of drinks, in that they're good even when they're bad.