What they're saying about the Eagles: Jalen Hurts and the offensive line will be alright 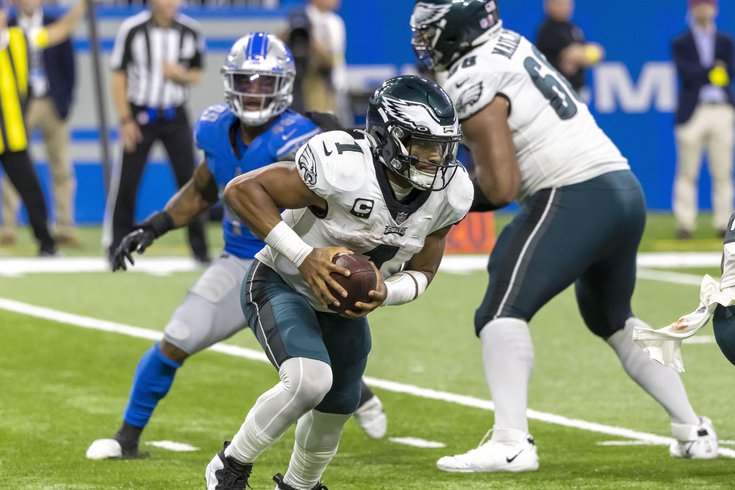 Jalen Hurts looks to run against the Lions.

It's a slightly longer week for the Eagles this time around with the Monday night start.

Yet there's never a shortage of things to talk about, especially when they're leading into the home opener.

So let's get right to it with another look at what they're saying about the Birds...

Unless he starts playing like Patrick Mahomes, where it becomes near indisputable how good he actually is, Jalen Hurts is going to be a point of contention all season.

Looking at the box score alone, you'd assume Hurts was terrible last Sunday. Anything but. The Eagles' offense put up 31 points against the Lions and won largely because of plays Hurts made, or, knew not to make as Reuben Frank argues:

He became the first quarterback to generate 30 points in a season opener despite no touchdown passes and lower than 60 percent accuracy since Tom Brady against the Colts in 2014 in a game LeGarrette Blount rushed for four touchdowns.

We’re going to have to develop new ways to measure Hurts’ performance because conventional stats really don’t tell the story.

What Hurts did Sunday was make a bunch of winning plays at big moments that added up to a 38-35 win over the Lions.

If you’re playing fantasy, he didn’t help you much.

If you just care about winning and losing, he did.

Hurts had three throwaways Sunday when he was under terrific pressure, and those are plays where he’s able to use his speed and athleticism to turn a six- or seven-yard loss into an incomplete pass. Those are winning plays that hurt his stats. [NBCSP]

On the right track

J.T. O'Sullivan, former NFL quarterback and founder of The QB School, also saw a lot of good signs in Hurts' performance last Sunday (bad too, but still), diving into the film and breaking down each of his plays.

I thought it was a performance that I was really excited about. I thought there were some really nice throws. I think we some significant and substantial improvement in Jalen Hurts' game as far as being able to throw the ball from within the pocket. Always fun to see how they incorporate his ability to run the ball and then his just natural ability to take off and get first downs when they're there.

I think that cocktail of what that looks like as he continues to improve, and if he improves over the rate that we saw in this game, over the course of the season and a few more years in his career, he's got an opportunity to be a really good quarterback in this league. [The QB School]

Check out the full breakdown below:

Nothing to worry about

It was clear the Eagles had rust to shake off against Detroit and that extended to the offensive line that supported the best rushing attack in football last season. Perhaps it was the cost of taking things so lightly with the starters through training camp and the preseason.

Former lineman and current analyst Joe Thomas sees that argument but ultimately thinks it's nothing to worry about. The Eagles' line is still stacked.

I think the Eagles have THE best offensive line in the NFL because they have no weaknesses. It's also because they're not injured. They do things the right way during training camp.

If you look at their tackles, they probably have the best duo of tackles in the NFL, Jordan Mailata and Lane Johnson. Lane Johnson's been doing it for a long time at right tackle. Jordan Mailata, he's one of the most fun stories in the NFL. The dude did not play a snap, not one snap, of American football before he was drafted...First two years in the NFL, doesn't play a snap. All of a sudden he comes in and made this amazing transformation, and he's one of the highest-rated offensive linemen in the NFL, he picked up right where he left off last week.

Interior three, all really good. Of course, everyone knows Jason Kelce, the perennial All-Pro. So no weaknesses, great depth, and those guys can lean on you and they can pound on you. [FanDuel]

Shamus Clancy touched on this in his Eagles notes the other day, but The Ringer published its first wave of QB rankings following Week 1 with Hurts coming in at No. 21.

We’re in year three with Jalen Hurts and I’m still not ready to make any grand declarations on what he could be. The development we’ve seen from his time at Alabama up until now has been impressive, but he still has a long way to go before establishing himself as a good starting quarterback. For now, though, Hurts is certainly a useful one. He is a legitimate threat as a runner, which elevates the Eagles run game, and he can hit on deep throws to the perimeter. That’s a nice foundation for an NFL offense! Now, if Hurts can just start reading out basic pass concepts and hitting deep crossers off play-action, Philadelphia might have something.

Hurts already seems to have a good grasp on the offense. The Eagles gave him some pre-snap responsibilities during his second season, allowing him to check in and out of runs, and he pulled the right strings for the most part. As things stand, Hurts is an asset on his cheap rookie deal, but he’ll need to take another step forward as a passer if he’s going to earn a big second contract. [The Ringer]

Fair. Again, Hurts is going to be a point of contention all year. But ahead of him in the rankings are Seattle journeyman Geno Smit at 20 and Atlanta's Marcus Mariota at 19.

Curious, but Smith did steal the show in the Seahawks' upset (?) of Denver on Monday.

This one's really cool. Bo Wulf over at The Athletic sat down with Brandon Graham to see if the veteran DE could remember every NFL quarterback he's ever sacked and how many times he did.

It's a lengthy, but fun conversation to read through. I just wanted to highlight my favorite part: Graham completely forgetting about Sam Bradford.

Wulf: OK, this guy played for you and was replaced by Carson Wentz.

Wulf: Before. When Carson was drafted.

Graham: That replaced him?

Graham: Damn, why can’t I think? Hold on, it’s about to come to me. He lost his spot to Carson.

Wulf: Yeah. They traded him.

Wulf: All right, we’ll come back to that one. Uh, quarterback of the Titans.

Wulf: No. The current one.

Darius Slay appeared on Richard Sherman's podcast on Wednesday and talked about the mental errors made against the Lions last Sunday, the week ahead against star receiver Justin Jefferson and the Vikings, and the larger CB-WR matchup picture in the NFL.

A quick exchange over Week 1 in Detroit:

Sherman: They made it a dogfight for your boys, didn't they?

Slay: Yeah, they did. They stuck to their game plan. It was kind of surprising, as in, we were up, what? 31-14? They were still running the ball, still doing the game plan, and it brought them back. We got to correct a lot of mental errors and stuff like that because, honestly, the game should've been probably 40-something - something. [Richard Sherman Podcast]