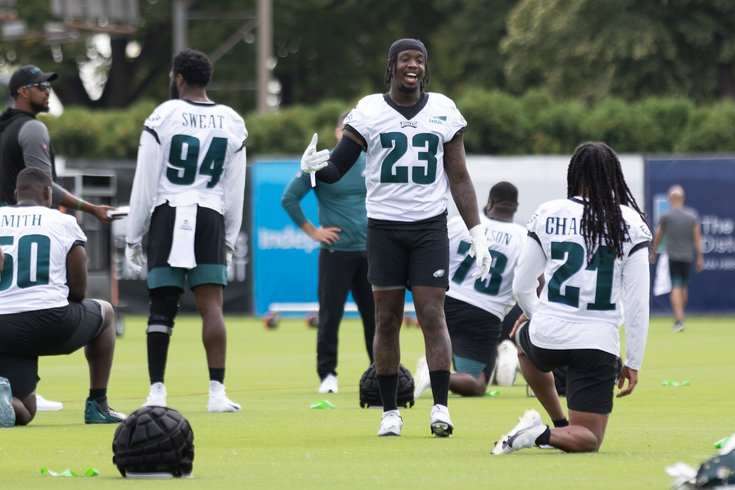 Back in January, when Philadelphia Eagles defensive coordinator Jonathan Gannon was being interviewed for the head coaching vacancies with the Denver Broncos, Minnesota Vikings and Houston Texans, it was looking for a moment like Jeffrey Lurie, Howie Roseman, and Nick Sirianni were going to be tasked with replacing him.

Had they promoted from within — and my understanding is that an internal promotion is the way they would have leaned — defensive backs coach Dennard Wilson likely would have assumed command of the defense.

Wilson has been a defensive backs coach with the Rams, Jets and Eagles, and he is confident that he is ready for the next step.

"I've been doing this a long time, and I've been around some great defensive coordinators, in my opinion," Wilson said. "I've been groomed by Gregg Williams, I've been groomed by Todd Bowles, who are very good in this league, and they're very thorough. I've been tutored by them. I know how to run a ship. I know the responsibilities. So if the opportunity presents itself, I'll be ready for it. But I'm here where my feet are, alright, and I'm just trying to be the best defensive backs coach I can be."

As it turned out, Gannon did not land a head coaching job and remained the Birds' defensive coordinator, with Wilson being promoted to "Defensive Passing Game Coordinator" in addition to his regular duties as the defensive backs coach.

What does that mean? "Really, nothing has changed," Wilson said. "Being promoted, I'm still serving the message of the head coach, what he has asked me to do. Jonathan is the defensive coordinator, so my responsibility is still as the defensive backs coach, and whatever he needs done, I'm just here to assist him. If he needs me to do more throughout the course of the year, I'm willing to do it."

Should Gannon move on from the Eagles next offseason, Wilson will be a top candidate to replace him.

For now, Wilson has an interesting group of corners and safeties to work with in 2022. The starting trio of Darius Slay, James Bradberry and Avonte Maddox is a very good group, with a slew of young corners behind them who need development. Meanwhile, the safety group is widely thought of as one of the concern areas on the roster, talent-wise. As such, Wilson is a particularly important positional coach this season. He was asked about a number of his players on Saturday.

On whether Marcus Epps is ready to start at safety

"All you have to do is put on the film from last year. I was put in a tough situation last year as a coach — not really tough, it was an outstanding situation — because I had depth. I had a guy in Rodney McLeod who I trusted. I had a guy in Anthony Harris who I trusted and played a lot, and I had Marcus, who was also one of those guys. Marcus earned his keep. When you watched Marcus in practice every day last year, he battled his ass off. He was tough and physical. He was always where he was supposed to be. He made the plays he was supposed to make.

"Even though there's 11 playing, you create roles for guys who deserve roles, and he played his role outstanding last year."

"He's learning a new defense, he's learning the verbiage. Everything is kinda being thrown at him right now, so he has information overload. When you have information overload, you're not going to play as fast early on. Be he is very smart, he's astute, he comes and meets after practice. He's played a lot of football, so for him it's about terminology, techniques and fundamentals, where his eyes should go in certain formations, and every day that we've been out here you can see him grasping it."

On the young corners behind Slay, Bradberry and Maddox

"Obviously, I had Zech McPhearson last year. We drafted Zech, so he was here the whole time. He went through a training camp last year. Zech does a good job of listening, and he does a good job of listening to the vets. And I have one of the best players to be around in terms of helping people and that's Slay. Slay is outstanding with those young men.

"But to have Mac McCain, to have Kary Vincent, to have Tay Gowan, those guys that we acquired during the season, they didn't really get the opportunity to compete in live action. Only one game. So now we're really seeing what they can handle mentally, what they can handle physically, and how hard they're going to go out and compete. And right now all the guys are doing an outstanding job of competing. They're taking advantage of the opportunities and we'll see how the chips fall as the season goes on."

"Every day that Slay comes out here and prepares, he's preparing like he's a two-year vet even though he's been in the leagues for 10 years. He has a wealth of knowledge, he understands how to practice. It's the little things. And goes out there and competes. He wants to be one of the best in the business and you can't do nothing but love that about the man."

"James also is the same way. James is a very intelligent football player. He's a fast processor. He's another guy who wants to be the best he can be. My coaching style is like this. I want guys to be good on my watch. If you don't want to be good, it's hard to play for me, because I'm going to push you. Those guys love to be pushed, they love to do the little things correctly."

On whether Howie included him in the decision to acquire Bradberry

"Howie has done an outstanding job this offseason not only with acquiring talent but also with maneuvering his front office. I wanted to give praise to Howie on how he integrated minorities within [the front office]. But Howie is very good at listening to his coaches, to his personnel, gathering information. Howie does an outstanding job of evaluating talent when he looks at the film. And Howie will come to you and ask you, 'What do think about this guy? How do you think he'll fit? What's going to be his role within the team?' And he asked me about James, because I wanted James when I was with the Jets and he was a free agent. I said I was all on board, and I'm happy to have him."

"I hope so. Everyone doesn't deserve an opportunity in terms of just giving them jobs, but if you do what you're supposed to do and put the time in and you're invested and you earn it, you do it the hard way, I hope we all get recognized and get opportunities to show our talents and more forward. So Howie was very direct, strategic, and he made some moves to show that he's listening, and I have nothing but the utmost respect for him and the Philadelphia organization."