Mailbag: Why can't Gardner Minshew be the Eagles' long-term answer at quarterback?

Plus, did the Birds dodge a bullet by not trading up for Zach Wilson? What's the deal with Philly's run D? And is Jason Kelce headed for another Pro Bowl? 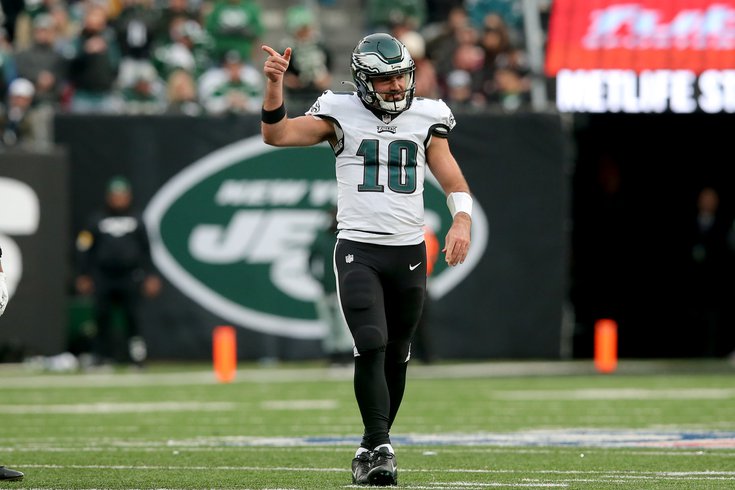 I look forward to the replies on Twitter that respond to the question in the headline without actually reading the article.

Question from SaWbOn3s: I don't understand why Jalen Hurts is viewed as someone who could still develop into a good passer but Gardner Minshew is a known commodity. Likely neither are good enough, but why is Hurts given this benefit of the doubt when they've had similar amount of game time and Minshew is clearly the superior passer?

I'll disagree somewhat with the premise of the question, because I don't know that there are a lot of people who are super optimistic that Hurts can develop into a good passer. However, after the Eagles were unable to acquire a franchise-type quarterback this past offseason, it made sense to give Hurts a season to improve, perhaps be a pleasant surprise as a passer, and show that he can be a long-term answer.

A player like Hurts is going to get that kind of opportunity because he has special skills as an athlete. If you look around the league, there's probably only one quarterback with better running ability than Hurts. That's Lamar Jackson. Minshew does not have good physical tools. He's short, slow, and in my opinion, does not have a strong arm, or even an overly accurate arm, at least to the point where his accuracy might make up for his other deficiencies.

Credit Minshew for getting the most out his ability, but he is always going to have a limited ceiling because of his lack of physical attributes. He has great pocket presence, he's crafty and creative in his decision-making, and he rarely turns it over. That makes him very appealing as a backup, especially since he's still on his rookie contract.

But he is what he is. He does not fit the profile of a player that a team should be taking a long, hard look at to determine if he can be a long-term answer, whereas Hurts was at least worth that look after the team whiffed on other options.

Question from Ross: Did the Eagles dodge a bullet by missing on Zach Wilson? Do you think they'd be better off with Justin Fields or Mac Jones than Hurts, or are they all not looking like franchise QBs?

In case you don't know what Ross is talking about, the Eagles reportedly discussed trading up to the third overall pick, but they evidently couldn't be sure that they would land Zach Wilson, who they apparently had heavy interest in, according to Ian Rapoport of NFL Network, in this since-deleted tweet: 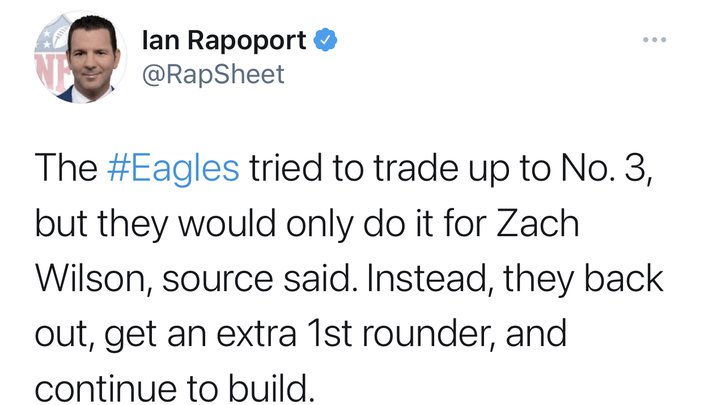 The guess here is that Rapoport very quickly got a text from Howie Roseman, who did not want that out there, or Joe Douglas and the Jets, who were sitting at pick No. 2, poised to take Wilson, but still trying to unload Sam Darnold on some poor sucker team while maintaining as much leverage as possible, so it got deleted.

Anyway, yes, it's looking like the Eagles lucked out that the Jets liked Wilson enough to take him at pick No. 2, or the Eagles may have traded a big package of picks to go get him. Yikes.

As for Jones and Fields, I think it's safe to say that Jones is looking like a long-term answer for New England. Fields has had a rough rookie season, but has at least shown intriguing glimpses. It'll be interesting to see what he can do in 2022 under (presumably) a new coaching regime.

Question from Bock: I've been concerned with the Birds' run defense. Why do you think they've have regressed? Poor LB play?

Under Jim Schwartz, the Eagles' No. 1 priority was to stop the run, make the opposing offense one-dimensional, and then get after the quarterback. As a result, Eagles defenses over the last half decade were usually very good against the run.

That philosophy has changed under Jonathan Gannon, but a few games early this season aside, they've still been decent enough against the run in 2021. Their NFL ranks:

Also, they have improved as the season has progressed. A look at each of their 13 games, and the opposing rushing totals:

As you can see, they allowed at least 100 rushing yards in each of their first seven games, with troubling run defense performances against the Cowboys and Chiefs. Since then, while quality of opponent and the flow of the games factor in, they've only allowed 100 or more rushing yards once.

Question from Teddy: What do you think about the Dallas D? Are they better because they got rid of Mike Nolan and his scheme that didn't fit the players? Or because they are healthy and have Micah Parsons, Trevon Diggs, etc.?

Before Nolan, the Cowboys seemed to have some level of fascination with the Seattle defensive scheme that won a Super Bowl and always went on deep playoff runs. For example, they had hired Kris Richard away from Seattle to be their passing game coordinator and defensive backs coach. He also called plays. That didn't work out, but when Dan Quinn became available, they didn't have to settle for a knockoff version.

Quinn has no doubt helped their defense get to the next level, but certainly, it doesn't hurt that Diggs and Parsons are both playing at a "Defensive Player of the Year" level.

Question from Victor Abiamiri: When did the DE position become the "EDGE"? I was a DE. Edge is a WWE character.

Once players get into the league, they’re usually called whatever position they are, whether that’s DE or OLB. For example, Connor Barwin was initially an OLB under Chip Kelly. He was a DE under Doug Pederson.

However, when it comes to college prospects, 4-3 DEs or 3-4 OLBs are referred to as edge players if they are primarily rushing the quarterback. That eliminates confusion between an edge rusher listed as a linebacker and actual off-ball linebackers. It also distinguishes between 4-3 DEs and players listed as DEs that primarily play on the interior in odd-man fronts.

The leading vote getter at center in the NFC as of a few days ago was Tyler Biadasz of the Cowboys, who in his wildest dreams isn't anywhere near as good as Kelce. For some odd reason, the Eagles don't appear to have promoted their players for the Pro Bowl. If I were a deserving player, I'd be kinda pissed about that, but whatever.

My understanding is that a third of the vote comes from the fans, a third from the coaches, and a third from the players? Is that right? So he should probably still get voted in, but who knows. I think he actually has a better chance of making the All-Pro team. (Some) sportswriters used to just vote offensive linemen in as All-Pros based on whose names they knew. Now they go to PFF, see the grades, and just go, "OK that guy can get my vote, I guess." Since Kelce is the highest-rated PFF center in the NFC, expect him to get the lazy guy vote, even if he is also deserving in this case.