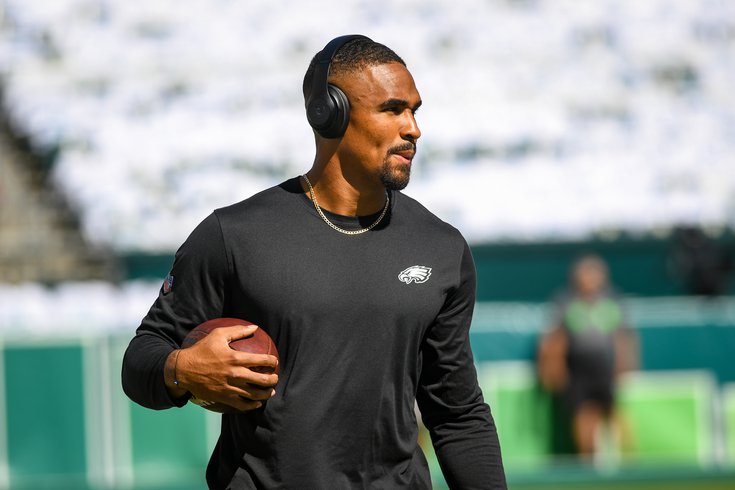 Heading into Week 15, the Philadelphia Eagles are a relatively healthy team, rested and relaxed coming off their bye week. Conversely, the Washington Football Team is an absolute mess, with over 20 players currently on their COVID list.

• Wednesday: It's a decent sign that every Eagle on the injury report was at least listed as limited, though I guess Jalen Hurts was limited prior to the Jets game.

• Thursday: Hurts' limited status in the Eagles' first full practice of the week is a bad sign for his chances of starting on Sunday. He's obviously still hurt, or the team wouldn't take practice reps away from him.

• LB Davion Taylor (IR): Taylor started six games for the Eagles. He had his best game as a pro in Denver Week 10, when he forced a pair of fumbles against the Broncos, one of which was returned for a touchdown by Darius Slay. Taylor was drafted as a raw prospect out of Colorado during the 2020 NFL Draft, and while he still has a ways to go as a professional linebacker, he has made positive strides during the 2021 season. He has been replaced in the lineup by Alex Singleton.

• WR Quez Watkins (COVID): Watkins is the Eagles' second-best receiver. He has 31 catches for 491 yards and 0 TDs this season.

In addition to the laundry list of injured players above, as noted above, Washington also has an absurd number of players on the COVID list, which you can find here.

• QB Ryan Fitzpatrick: The Football Team signed Fitzpatrick to a one-year deal worth $10 million this offseason. He started Week 1, but left with a hip subluxation after just six pass attempts, making way for Taylor Heinicke. Last week, Fitzpatrick had season-ending surgery. To note, one of the players on Washington's COVID list is Kyle Allen. They don't have a third quarterback on their active roster, but Kyle Shurmur is on their practice squad.

• DE Chase Young: Young made the Pro Bowl as a rookie in 2020, after collecting 7.5 sacks and 4 forced fumbles. He tore his ACL and is done for the season. Washington currently has seven defensive linemen on their COVID list.

• C Chase Roullier: Roullier began the season as WFT's starting center. He has a fractured fibula, and was replaced by Tyler Larson at center. Larson got hurt against the Cowboys last Sunday, and did not return. His status for this Sunday is unknown. He was replaced by Keith Ismael.

• LB Jon Bostic: Bostic entered the season as a starting linebacker. He suffered a pectoral injury and likely done for the season.

• CB Benjamin St-Juste: St-Juste was a third-round pick of the Football Team in the 2021 draft. He appeared in 9 games, starting 3. He has suffered multiple head injuries this season.

• K Joey Slye: The Football Team is on their fourth kicker this season. Brian Johnson is their current kicker. If you watched the WFT-Cowboys game last Sunday, you saw Johnson miss what could have been a crucial PAT.