Eytan Shander: Playoffs or bust for Hurts, Sirianni and the Eagles? Depends who's asking. 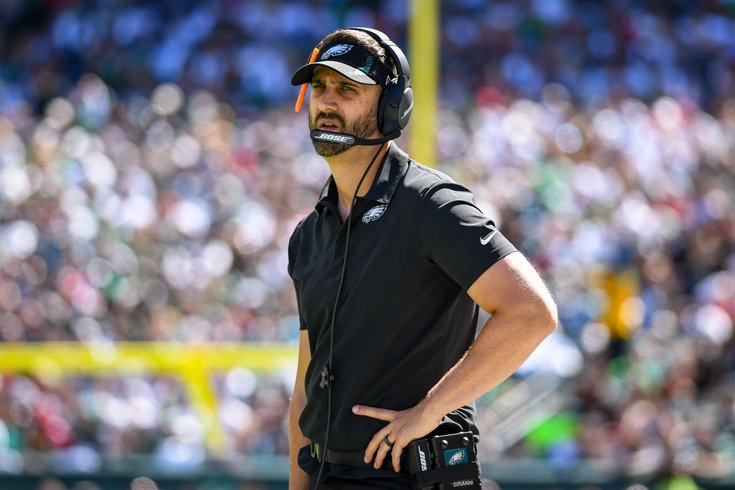 Maybe not for you or me, but that very well could be the case for the powers that be down at the NovaCare Complex, as there are likely some jobs on the line if this Philadelphia Eagles team suffers any major collapse down the stretch. And even though that would potentially make for an interesting offseason, I am rooting for this team like you are rooting for this team: to succeed and make the playoffs. But I'm not going to live or die — or wildly change my opinion of the team — based on whether or not they get in the postseason.

Everyone except a small handful of NFL waste products has a shot at making the playoffs. The one thing we know this year is that despite all the issues on the field, the nonsense at the start of the season with shirts and mantras, the problems they've had with the defense, and the lowest common denominator in our city pushing for a QB controversy — after all of that, the one thing we know for sure is that the Eagles are no bottom-feeder.

You may take that for granted but I don’t, not in the NFL where things are so quick to change. This team has turned around a downward trajectory and is looking like they have some building blocks. But one thing is hard to ignore: what happens in the offseason is never set in stone. Jalen Hurts may be playing for his job, be it here or somewhere else. The same goes for Johnathan Gannon and some others in this organization.

This final stretch of games for the Eagles is this year’s gut check. We asked for a team to show signs of growth, to act like they care and for their play to reflect it. We’ve seen plenty of that mixed in with some tough losses. The division is not a pushover if teams are healthy, so we await how COVID will impact who the Eagles are lining up against each week.

Making the playoffs is the goal but it’s not the only barometer for success. This isn’t a radio show or some desperate need for public validation, I don’t care if you disagree with me here. But if you are looking at this year’s team and using the lone determination of making the playoffs as a good or bad year, then you are a moron.

The rebuild or retool or whatever you want to dress this year up as was never about anything more than showing players and coaches belong. We still aren’t sure about some guys, but feel great about growth potential for other recent draft picks. DeVonta Smith and Landon Dickerson look like they can play, but we also have no idea what the future holds for someone like Miles Sanders. Or Jalen Reagor. Or Andre Dillard.

The coaching staff has some question marks, and the team is far from set as a contender, but there has been growth. Sure, the big question remaining is what happens with the QB, but we still don’t know which RBs are back on the team at this point outside of Kenneth Gainwell. They have one legit starting wide receiver and another 3/4 wideout. They have one TE. Their best player on offense and defense – arguably the most important pieces on this team in Jason Kelce and Fletcher Cox, respectively — may not be here next year.

It’s a lot to take in and a conversation better had in the offseason, but it also shows you the internal pressure put on this team beyond the typical noise we provide. While I would like to see Hurts given the chance to improve and grow as a passer in this league, my concern isn’t with him but the people in charge. It’s not even a competence or “FIRE HOWIE” issue, more so something grounded in reality.

We smash these guys all the time. Yelling at Jeff Lurie and then taking it out on Roseman by calling for his job. But like most things on this planet, it’s never one way or the other. We try our hardest to simplify things in our lives because we can then understand them. If Roseman is ONLY the worst GM in sports who is defined by bad picks, then it’s easy to formulate an unchanged opinion and never waiver no matter what information comes your way.

This is how people who live on Twitter see the world, but the good news for the rest of us is that the world doesn’t reflect Twitter. It's not so black and white. And by adding context to any situation, we have a better understanding of what and why something is happening. The context of so much impending change coming with this team makes me a little uneasy about what people are actually playing for down the stretch.

It’s gut check time. The Eagles have a chance to validate what we’ve all seen when they are at their best. They have a chance to make the playoffs. Who cares that 75 percent of the league has a chance, they are in that group and it shouldn’t be ignored nor downplayed.

It shouldn’t matter to Hurts or Gannon or Cox what job they are playing for, as each one has something different on the line. It’s enough for this team to come together and put one final stretch of effort together.

In the end, isn’t that all we asked?

This isn’t some sick ploy to get you to watch this game or even pay attention to it. I have no problem with betting and forgetting it, but I do expect to cash it. This game is super low because of last week’s poor efforts from both teams – especially that awful performance from the Jags offense. I love games like this deep into the season that pit two horrible teams against each other. The public sees this and the low total and will smash the under, because both teams are so bad. But we see this happen a lot, where bad offenses explode because the opposing defenses are worse. I’d be surprised if this game isn’t in the 50s. Bet the over.