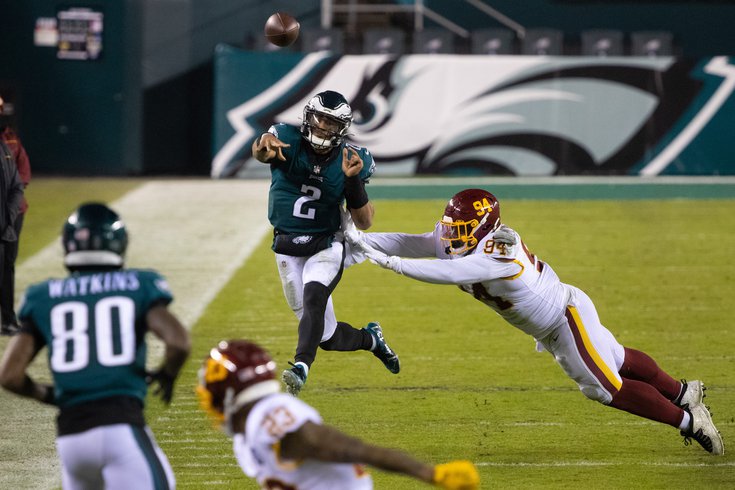 Whether it's Jalen Hurts or Gardner Minshew on Sunday, the Eagles should take care of the COVID- and injury-devastated Washington Football Team.

For the gambling enthusiasts, here are my Week 15 NFL picks. To note, the team logos indicate who I think will win the game, not cover the spread. At the end of the picks, I'll note a few teams that I like based on the spread — with all Week 15 lines coming via Sidelines.io.

Chiefs (-3) at Chargers: As we noted last week, over the first seven games of the season, the Chiefs were allowing 29 points per game, and they only created 7 turnovers (1 per game).

Over the last six games, they have allowed 10.8 points per game and have created 16 turnovers (2.7 per game).

This is probably the best matchup of the week, as the Chargers have a chance to sweep the Chiefs and take the lead in the AFC West on the strength of a tiebreaker. They're not there yet. This Chiefs team is playing at a high level defensively, and the offense is finally beginning to click. I think they're once again the best team in the NFL.

Raiders (-1.5) at Browns: The Browns have 15 players on their COVID list, and are still only 1.5-point underdogs because the Raiders have lost five of their last six.

I'll make a mid-week bet on some of Cleveland's important guys returning in time for Sunday and beating this Raiders team that is in free fall.

Patri*ts at Colts (-2.5): Carson Wentz needs five more snaps played to meet a projected benchmark that will turn the second-round pick that the Colts owe the Eagles into a first-round pick. This is a nationally televised game, so Eagles fans will get to watch that. 🎉🍾

The Patri*ts have won seven straight by a combined score of 225-73, while the Colts have won four of five. They are two of the hottest teams in the NFL, but the Patri*ts are hotter. #Analysis.

Football Team at Eagles (-7): As of Thursday morning, Washington has 18 players on their COVID list, 10 players on their injury report, and a slew of important players on injured reserve, including their starting quarterback and their best defensive player. What more needs to be said?

Panthers at Bills (-10.5): We killed off the Panthers in the Hierarchy this week. They're done. This should be a "get right" game for the struggling Bills, formerly a lock to make the playoffs, but now in desperate need of a win to stay in playoff position in the AFC wildcard hunt.

Jets at Dolphins (-10): Once upon a time, the Dolphins' first round pick, owned by the Eagles, was looking like it would land in the top 5, but after five straight wins Eagles fans are hoping at this point that Miami at least doesn't make the playoffs.

The Jets should serve as little more than a speed bump on Miami's way to their sixth straight win.

Cardinals (-13) at Lions: With the Colts, Cowboys, and Seahawks on the Cardinals' schedule the last three weeks of the season, it could be easy to overlook the 1-11-1 Lions. Because they lost a super important game in primetime to the Rams Week 14, Arizona needs this game and won't be taking this game for granted.

Cowboys (-10.5) at Giants: According to Ralph Vacchiano of SNY, Joe Judge is expected to remain the Giants' head coach in 2022.

Judge is widely expected to be brought back for his third season with the Giants, despite an immensely disappointing season and a dismal 10-19 record as a head coach overall. Though nothing is final until Mara and Steve Tisch say it is, multiple team and league sources said the belief is Judge’s job is safe – and that’s even if, as expected, ownership nudges GM Dave Gettleman into retirement at the end of the year.

“A few weeks ago I would’ve told you no chance he gets fired,” said one NFL source. “Now? Even after (the Giants’ 37-21 loss to the Chargers on Sunday), I’d probably still say ‘No chance.’ (Mara) loves Judge. He thinks he’s found his (Bill) Belichick or (Bill) Parcells. And there’s just no way he gives up on another coach this soon.”

The rest of the NFC East approves.

Titans (-1.5) at Steelers: With a win, Tennessee would clinch a playoff berth, and their "magic number" in the AFC South would be 1.

By the way, for a guy with a 162-80-1 career record, two Super Bowl wins, and a surefire ticket to the Hall of Fame, Ben Roethlisberger hasn't garnered much attention in what could be his final season in the NFL, and for good reason.

Texans at Jaguars (-3.5): Urban Meyer hired an awful person to be the Jaguars' strength and conditioning coach, he was caught on camera groping a young woman at a bar, and he reportedly had blowups with players and called his assistant coaches "losers," but kicking a kicker was apparently the final straw for his firing in Jacksonville.

This feels like a "Let's win without this clown" game.

Bengals at Broncos (-2.5): This is a big game on the AFC wildcard implications front, as the Bengals and Broncos are both 7-6, but presently on the outside looking in. The Bengals are better, and Joe Burrow showed enough last Sunday that he can play through his finger injury.

Falcons at 49ers (-9): I look forward to killing off the Falcons in the Week 16 Hierarchy.

Packers (-5) at Ravens: Aaron Rodgers might win another MVP, while Lamar Jackson's season has fallen apart. Jackson can still make dazzling plays, but there's probably truth in the thinking that opposing defenses have figured out how to at least slow down the Ravens' run-heavy offense, which is something the Eagles should evaluate when deciding whether or not Jalen Hurts is their long-term answer.

Seahawks at Rams (-4.5): After returning far earlier than expected from his broken finger, Russell Wilson understandably struggled initially, but he has since resumed his previous level of play. He has four games to further prove any nonsense notion that he's washed.

The Seahawks are one of the better 5-8 teams you'll see, and I was tempted to take them outright, but the Rams seem to have their number, winning 10 of the last 14 matchups against Seattle.

Saints at Buccaneers (-11): The Saints ended a five-game skid Week 14 against the Jets. They'll resume losing this week against a real team.

Vikings (-3.5) at Bears: Ugh, I hate picking the inconsistent Vikings, and laying 3.5 points with them when they play so many close games, but they're so much better than this Bears team that also feels like they're in "play out the season with no heart" mode, with Matt Nagy almost certainly on his way out.