Eagles run does the job (again) against Lions

Just like last season, the Eagles' rushing attack was their saving grace 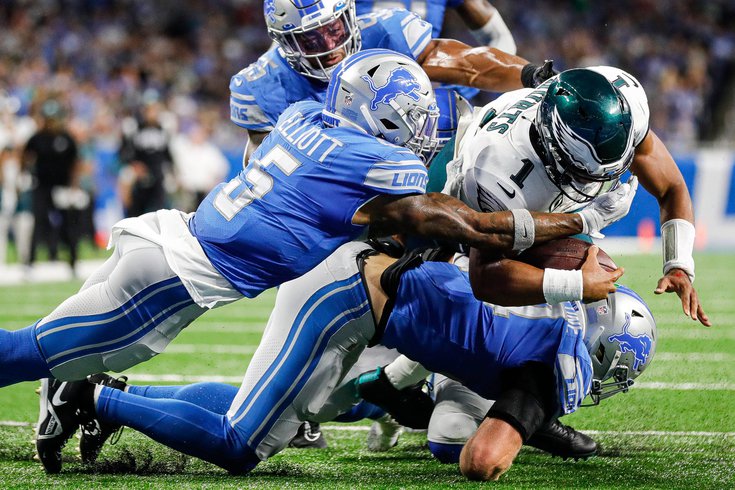 Last Halloween, the Eagles pummeled the Lions through a dominant day on the ground. On Sunday, it looked like things were heading toward that same outcome. Instead, the run game ended up saving them.

After Detroit cut a 17-point lead down to just three with 3:51 left to play, the Eagles were in survival mode. They needed to run out the clock.

Facing a 3rd and 2 from their own 27 with 2:24 remaining, Miles Sanders hid behind his blockers then burst through a hole for a 24-yard gain and a crucial first down. That took time down to the two-minute warning.

Then, after a one-yard run, Boston Scott barreled forward for another eight yards to set up a 3rd and 1 with 1:50 left, forcing Detroit to use its final timeout.

Scott got the ball again. No gain, 4th and 1 with the clock running and the game on the line. Blockers converged in, Jalen Hurts powered forward, the refs found the spot, it was enough.

The Eagles held on to win their season opener, 38-35. They're 1-0, and while A.J. Brown stole the show with a strong debut and the defense raised cause for concern with a sloppy second half, the rushing attack remains the team's saving grace.

Last year, in the 44-6 route that shifted the season's trajectory, the Eagles rumbled to four touchdowns and 236 yards on the ground. Jalen Hurts led the way with 71 yards.

"It's a whole new year, they're a whole new team," cornerback Darius Slay said earlier this week. "Teams switch up every year. It's never the same team as last year, so they made improvements we made improvements, so we gotta go out there and execute and be at a high level, man. It's a new season, new start for all of us, new fresh, clean face."

But that didn't mean the old strategy had to go out the window, and with one of the NFL's top offensive lines and its top rushing attack returning fully healthy, it got the Eagles by, especially when things through the air were shaky early.

After the Lions fed off an electric Ford Field crowd to an opening touchdown, with the Eagles' defense struggling to tackle, Detroit's defense clamped down. Hurts' options were limited and he was getting pressured constantly. His legs kept drives alive.

On a 3rd and 6 late in the first quarter at the Eagles' own 45, Hurts scrambled for 10 yards and the first. He started finding Brown in the plays that followed for gains of 18 and 16 yards. Then, on a 4th and goal, got the Lions to bite on a fake and trek right into the end zone to tie the game, 7-7.

"He had some big third-down runs," Brown said. "When I saw him take off and looked where we needed to get, I said 'I'm pretty sure he's gonna get it.' If you look at the film and see me when he takes off I'm like 'Okay, first down. Let's go.' That's what I expect from him."

"What an unbelievable thing to be able to have as a coach," said head coach Nick Sirianni of Hurts' ability to scramble. "'Oh we called that? Didn't work?' He made it right."

Hurts waltzes in on 4th and goal. #FlyEaglesFly

He was a threat to run all day, but a highly physical Lions' defense knew that, and he was at risk because of it. Late in the third quarter, Hurts took off on a 3rd and 4 and got the yards the Eagles needed for the first. He slid but got rocked on the way down when Detroit safety Tracey Walker launched himself helmet first at Hurts' head.

The Eagles got an extra 15 yards for unnecessary roughness and Walker was ejected, though this isn't an isolated incident. Hurts already took a late hit running out of bounds in the first preseason game against the Jets, so his vulnerability is going to be something to worry about as long as he keeps taking off.

What was encouraging was a big day from Sanders, who had a mixed bag of a year in 2021 and dealt with a hamstring issue through camp. On Sunday, he was quick, shifty, and rose to the occasion when the Eagles needed something to happen.

There are still 16 games to go, and in a contract year, his future in Philadelphia is uncertain. But when he's healthy and on the field, the Eagles are a better team.

He was a big reason why they won on Sunday and why they were able to stave off collapse.