A.J. Brown is everything the Eagles needed at wide receiver 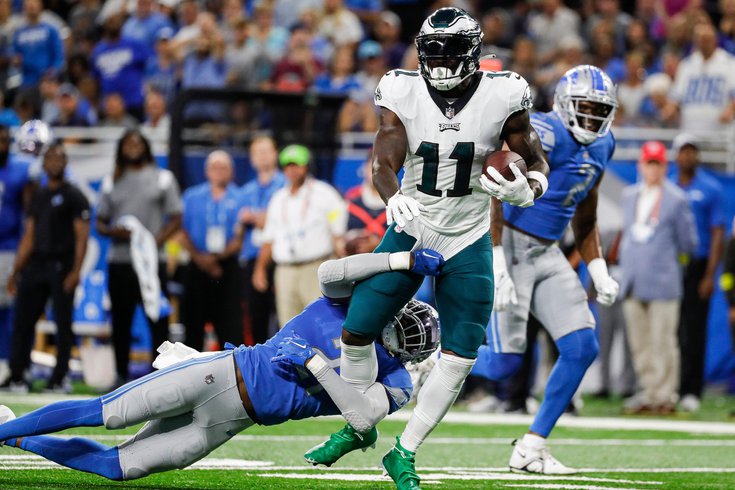 In an offseason where Howie Roseman went wild remaking the Eagles' roster, it's the A.J. Brown trade that has already changed the complexion of the team after just one game.

The trade for Brown back in April had a 'WTF' element because it came out of nowhere, as the Birds immediately signed the Pro Bowler to a contract extension worth up to $100 million after stealing him from the Titans. The hype around the offense's potential all summer and talk of Brown and quarterback Jalen Hurts being best friends rang true on Sunday, as Brown pulled off a better game than even the most optimistic of Eagles fans could've thought: 10 catches for 155 receiving yards in a 35-31 win, tying a career high in yards.

The only person who would probably say that Brown had fewer receiving yards than expected is Brown himself. That's his demeanor and bravado, the exact type of energy a superstar wide receiver should carry himself with on a good team. Writing about "vibes" in July and August was great, but seeing is believing. It was just one game, yes, but in his Eagles debut, Brown played like the best Eagles wideout since Terrell Owens himself.

The passing game looked totally transformed before the first half was even over with Brown racking up 128 receiving yards in just two quarters of play. Hurts, of course, doesn't look like one of the game's elite QBs and had a few off throws Sunday afternoon, but Brown's presence is helping him leap from "okay passer" to "good passer." That improvement alone might be enough to take the Eagles from a nine-win team to an 11- or 12-win team.

In covering all of Hurts' training camp throws, what most changed in his game was his willingness to throw the ball all over the field. It may have been in glorified passing drills in 7-on-7s, but Hurts was hitting Brown time and time again on slants, allowing a guy with his physical profile to make huge runs after the catch. Here's what I wrote a specific play after the Eagles' August 6 practice:

Brown motions in a couple of yards from the left side of the line and then runs a hitch route in the second level of the defense for a 10-ish yard pickup on the pitch and catch from Hurts. It's been my biggest refrain during Hurts' practices: just throw the ball on slants and quick over the middle routes to Brown. The team has a star receiver. Put the ball in his hands.

That's what the Eagles did in Detroit! If a schlub like me can figure out that's as close as the team can get to an "unstoppable play," Nick Sirianni and Shane Steichen were certainly well aware of it and put it right to practice in Week 1.

Hurts isn't making that throw last year. Brown is changing everything about the Eagles' passing attack.

I think back to the T.O. comparison. It's one Eagles fans were quick to throw out. Saying a guy is the second coming of one of the three-or-so best wide receivers is a lot, but that's Philadelphia for you and I'd bet the house on Brown being totally fine with those expectations being thrust upon him. Brown lining up at receiver completely contorts an opposing team's defensive scheme.

Owens himself had a legendary Eagles debut, going for 68 yards and catching three touchdowns back in 2004 against the Giants. Brown has yet to hit pay dirt in his Eagles career, but I'm sure those TDs are coming.

After a Week 1 win, Eagles fans can take solace in having one of the game's greatest receivers in midnight green.