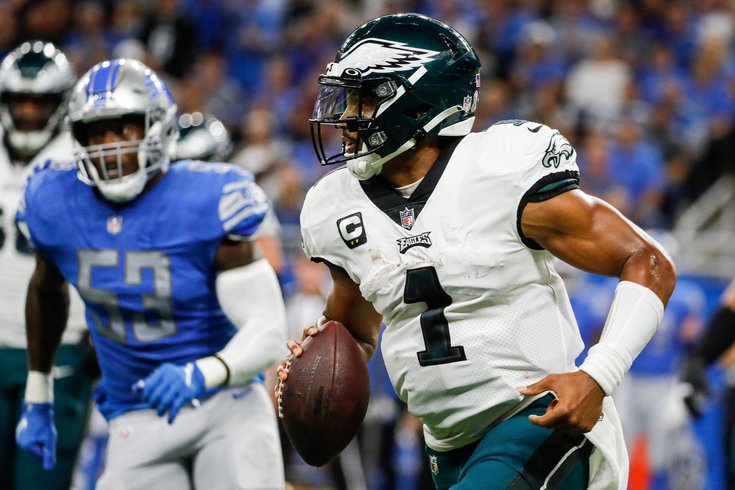 A new feature this season following Eagles games: I'll be running down the three most pivotal plays of the day. These are the moments that most shifted things in the Birds' favor in a win or ultimately what led to their downfall in a loss. Pretty simple!

Here's what I saw from the Eagles in their heart-pounding 38-35 Week 1 win:

The definitive turning point for the Birds was capitalizing on one of many Jared Goff mistakes. An errant pass intended for tight end T.J. Hockenson went off the finger tips of linebacker Kyzir White and into the hands of cornerback James Bradberry. Bradberry didn't even a move on the ball as much as it fell into his hands as his body was taking him to exactly the right place. It was a stroke of luck that flipped the mental state of Eagles fans across the Delaware Valley, putting them up 21-7:

A 14-point lead after Detroit's opening-drive touchdown and the Birds' early offensive woes was the ultimate "I don't know how we got here, but I'll take it" moment for the Birds.

Late in the quarter, Jalen Hurts took off, as he did all afternoon on his way to 90 rushing yards, and picked up some yards on ground for a first down. As Hurts slid, Lions safety Tracey Walker laid into Hurts for a dirty hit. Those types of cheap shots had been a recurring element of Detroit's defense all game. The referees swallowed their whistles earl in the contest on types of hits on Hurts slides, giving Lions defenders more freedom to keep attacking the Birds' quarterback.

In a rare move, common sense prevailed for the officiating group. Walker was penalized for the hit and kicked out of the game entirely. Eagles players rallied around Hurts after and got in the faces of Lions players with Dallas Goedert and Zach Pascal notably being the most aggressive of the group. This was a great "vibes" moment with the team supporting their QB1, channeling that fire and going pedal-to-the-metal to put up another scoring drive.

Goedert went full Angry Run mode and picked up 22 yards on a screen on the immediate next play. Boston Scott picked up a one-yard touchdown on the following one, putting the Birds up 38-21.

After the Eagles tried to give the game away in the most typical of fashions, they got the ball back with a three-point lead and a chance to put a nail in the Lions' coffin and burn the clock. With a jumbo package on what felt like a rather long fourth and one, Hurts barreled through the line of scrimmage and just narrowly got the ball over the first down marker. Goedert provided a little push on Hurts that would've made Reggie Bush blush.

It was the Eagles' third fourth-down attempt of the game and their second conversion. I'm someone who's always going to advocate for being aggressive and going for it on fourth. If Detroit had gotten the ball back, hit a chunk play or two and threw themselves in a position to hit a field goal and go to overtime, well, Philadelphia would've exploded. Those meltdowns will come (and may be deserved!), but the Birds stave off a total collapse and prevailed.