Eagles defense meets the 'standard' in rout of Vikings

Jonathan Gannon's group came home, cleaned up, and under the stadium lights of Lincoln Financial Field, completely shut down the Vikings. 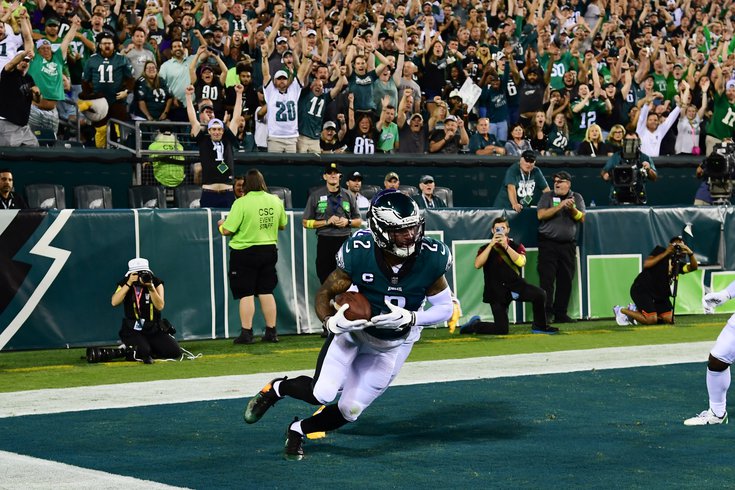 Eagles CB Darius Slay catches his second interception of the night in the fourth quarter of the team's 24-7 win over the Vikings.

The Eagles were up, but the Vikings were driving.

Getting the ball to begin the second half, down a very familiar 24-7, Kirk Cousins had moved Minnesota all the way down to the Philadelphia 19 through a series of short and quick passes.

On 2nd and 10, and within striking distance, Cousins dropped back but the pocket collapsed. Javon Hargrave was closing in and the Vikings quarterback slung the ball toward Justin Jefferson in the end zone.

It was falling way short. Darius Slay plucked it out of the air at the goal line and broke the other way. Jefferson threw his hands up in disbelief. Nothing was working for Minnesota on Monday night.

A week after the Eagles surrendered 35 points – 21 of them in the second half – in a sloppy opening performance at Detroit, defensive coordinator Jonathan Gannon's group came home, cleaned up, and under the stadium lights of Lincoln Financial Field, completely shut down the Vikings.

In a performance that screamed 2017 from nearly every angle, the Eagles held Minnesota to 264 yards of total offense on the way to a 24-7 win.

Cousins went 27-46 passing for 221 yards, a touchdown, and three interceptions. Running back Dalvin Cook had six carries for just 17 yards. Jefferson, one of the league's top receivers who the Eagles infamously passed on in the draft two years ago? Only six catches for 48 yards with a long of 11. That guy they passed on Jefferson for? A single catch for seven and five yards' worth of punt returns.

"We know that we gave up 35 points last week and that's not our standard," defensive tackle Fletcher Cox said earlier this week. "Our standard is to keep a team to a certain amount of points and obviously, you'll take a win but at the end of day, 35 points is a lot. We can't keep continuing to give up that."

On Monday night, the Eagles gave up just seven – a second-quarter touchdown on a two-yard pass from Cousins to Irv Smith Jr. – and gave the Vikings nothing after. They're 2-0. So for Week 2 at least, consider the standard met.

Third- and fourth-down conversions were a killer for the defense in Week 1. When drives were on the line, the Eagles couldn't reliably get a stop. Detroit went 9-14 on third-down attempts and 1-1 on their lone fourth-down shot, nearly stealing the victory away had Jalen Hurts and the offense not run out the final four minutes.

Week 2 was much a different story, and it was clear it was going to be early on. The Vikings, who went 4-for-12 on third-down conversions, were forced into three-and-outs on their first two drives. The first ended in a pass breakup by Slay near the left sideline – though he may have gotten away with a hold on Jefferson there – and the second was done after a breakup by James Bradberry, who tracked a shallow route over the middle.

Following its lone scoring drive of the night, Minnesota fell into a three-and-out again, this time ending with Cousins' pass getting swatted down by T.J. Edwards over the middle on 3rd and 2. The Eagles then took the ball and went up 21-7 on a drive capped off by Hurts' highlight reel touchdown run.

Applying pressure to the QB was another issue from Week 1 too, one that brought Gannon a lot of criticism throughout the week. But the Eagles' defensive front was able to make Cousins rush his decisions all night on Monday, which led to everything completely unraveling for the Vikings in the second half.

Slay's interception kicked things off, but then Avonte Maddox hauled in an errant throw intended for Adam Thielen on the very next drive.

With nine minutes left in the fourth quarter, Fletcher Cox finally broke through and got to Cousins for a nine-yard loss and the Eagles' first sack of the night to make it 4th and 22. Then, after a flukey interception from Hurts landed in the hands of linebacker Jordan Hicks to give the Vikings the ball back at the Eagles' nine-yard line, Cousins tried to float a pass to Jefferson in the corner of the end zone on third and goal. Slay high-stepped it and pulled in his second pick of the game, pretty much putting a seal on a night where he nearly had a third too.

Have a dang day, @bigplay24slay.

"Our first game, that was on us, as a unit," Slay said afterward. "We didn't tackle well, we didn't execute well and that had a lot to do with just preseason, but it's still no excuse. Gannon isn't out there playing. Gannon's giving us the call, so we just gotta execute it.

"We were in a lot of great situations where we just didn't make the play, but tonight, we were on the other foot. We had in our mindset to go out here and dominate, play this game with a lot of effort and a lot of talent. Guys were just out there executing their jobs. That's what we do. Coach put us in a great position to win."

And they executed against a Vikings team that, a week ago against Green Bay, looked like an offensive powerhouse. Now Carson Wentz and the Commanders are on-deck down in Washington.

"It's early, we gotta keep going," Slay said. "We still left a lot out there, so we gotta go clean up some tape, execute a lot better, and continue to keep moving forward.

"We're ready for any challenge, and that's what we're here for, to be the best."