Jonathan Gannon: Defensive performance 'not the standard we need' 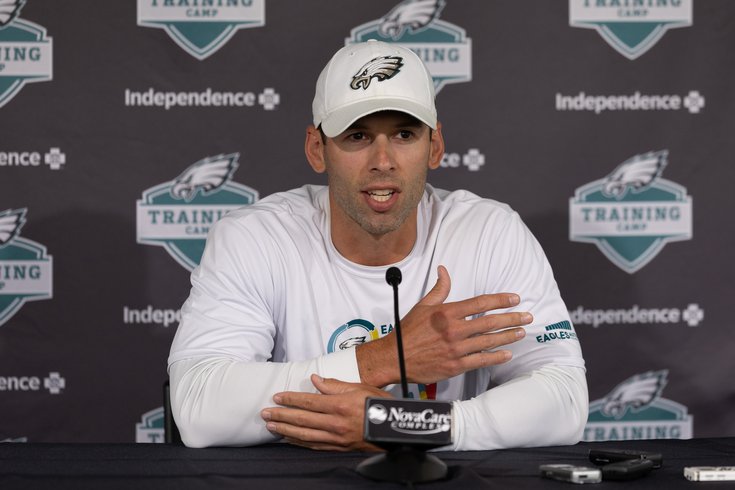 You rarely want to be the main character of the week when it comes to what Philadelphia sports fans are complaining about. That distinction unfortunately falls upon Eagles defensive coordinator Jonathan Gannon after a rough outing for the team's defense in Detroit on Sunday. Everyone has a take on Gannon's standing as the leading defensive mind right now, but when speaking with the media on Tuesday morning, Gannon owned up to the team's mistakes against the Lions.

"Just to start, obviously, there are a lot of things we need to clean up," Gannon said before reporters even got a chance to ask him a question as his press conference opened. "I'm looking forward to that opportunity that I think is very clear to the coaches and the players after watching the game, what we need to clean up quickly from an execution standpoint, a technique standpoint."

In their 38-35 Week 1 win, the Eagles' struggled both against the run and with getting after opposing quarterback Jared Goff against a Lions team that won just three games a season ago. A 17-point second half lead that had the team riding high quickly evaporated with long, sustained drives from Detroit, putting themselves squarely back in the thick of things by the fourth quarter.

"I thought we did some good things, but 35 points is not good enough," Gannon said about the defense's performance. "Had a chance to put that game away a couple different times I thought. We didn't do it and that's what happens. You get in a dog fight like that. Overall, I'm happy we won the game, but that's not the standard we need. We have to improve quick and we will."

The defense's inability to force Detroit to punt in the second half prevented what should've been a game where the Eagles cruised to a W. The longer the Birds' defense remained on the field, the more worn down they were and the fewer opportunities the offense's proficient rushing attack had to burn some clock.

"A lot of it came down to situational ball because we had our chances to get off the field a couple of times and we didn't do it, so we were getting into third down a good amount. The one drive I think they had five third downs that they converted," Gannon said about the D's lack of third down success.

"You're just goin down a long, hard road if you're not getting off the field on third down and that extends drives and you get into the red zone and we didn't hold up in the red zone and those are points," Gannon continued. "It's really a combination of first and second down, doing what we're doing and executing a little better on third down to make them punt.

"Like I said, we have to get it cleaned up."

They certainly will need to clean it up ahead of their home opener next Monday. A Vikings team that put up over 400 yards of total offense in a win against the Packers on Sunday is rolling into South Philly. With new offensive-minded head coach Kevin O'Connell leading Kirk Cousins and perhaps the best wide receiver in the entire sport in Justin Jefferson, improvement is a requirement, not merely a suggestion.

"Explosive." Gannon said when asked about his impression of this Vikings offense.

"They have some explosive people over there. The quarterback's a really good player. He knows where to go with the ball. It comes out fast. Obviously, they have some wideouts and a back," Gannon continued on about Minnesota. "They're very good players, so we're going to have to be on it to give ourselves a chance to win the game on Monday."

"Very good" may be an understatement for Jefferson. The Vikings' superstar wide receiver will live in infamy in Philadelphia, as the Eagles selected now-departed wideout Jalen Reagor one spot ahead of Jefferson in the 2020 NFL Draft. Jefferson is on a historically great trajectory in his career and Reagor is no longer on the Birds' roster. Rough.

"He's a special player," Gannon said when asked about Jefferson specifically. "I don't rank guys, but he's up in that top group. He can beat you all different types of ways, so when you're looking at his game, he's not a one-dimensional guy. He can take the roof off. He can beat you underneath. He can beat you with yards after catch. They do a really good job of deploying him different ways, so it's difficult to have a plan for him to always have two guys on him. It's going to be a good challenge for us and we'll be up for it."

It'll be a challenge for sure. If Gannon's unit can prevent Jefferson from replicating his 184-yard, two-touchdown performance from Week 1, perhaps he'll just be relegated to a supporting role in next week's larger Eagles conversation.