Eagles-Vikings: An early look at the odds

The odds favor the Eagles ahead of this one, but only slightly after both teams' Week 1 performance. 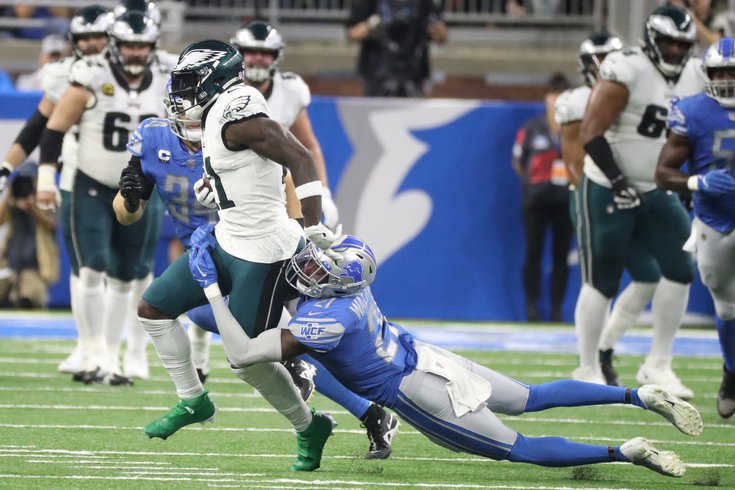 Eagles WR A.J. Brown runs after the catch against the Lions.

The Eagles are on to Week 2 and the Minnesota Vikings on Monday Night Football.

In their season-opening win at Detroit, A.J. Brown made a spectacular debut, Jalen Hurts and Miles Sanders kept the Birds ahead with the run, but the defense looked sloppy and frequently missed tackles.

If last Sunday is any indication, they won't get away with that against Minnesota. Facing Aaron Rodgers and the Packers, the Vikings dominated in every aspect. Justin Jefferson looked like the top receiver in the league, Dalvin Cook ran for 90 yards, and Minnesota's defense sacked last season's MVP four times. (Check out the highlights HERE. We can't embed it because the NFL's YouTube policy is dumb and blocks it out.)

Postgame, the Eagles were clear about needing to clean things up, and they'll need to do it fast ahead of their home opener because Minnesota definitely isn't Detroit.

Regardless, the odds still favor the Eagles ahead of this one, but only slightly after both teams' Week 1 performance.

And a fun player prop to consider via DraftKings: Justin Jefferson and A.J. Brown get 300 receiving yards and 2+ touchdowns combined at +1600.

Brown is still looking for his first touchdown as an Eagle but was clearly Hurts' favorite target on Sunday in Detroit with 10 catches and 155 yards. It's easy to imagine that the Linc would lose its mind if Hurts and Brown connect for a score on Monday.

Jefferson, meanwhile, pulled in nine catches for 184 yards and both of the Vikings' receiving touchdowns. Kirk Cousins is no doubt going to be looking for him again under the stadium lights.