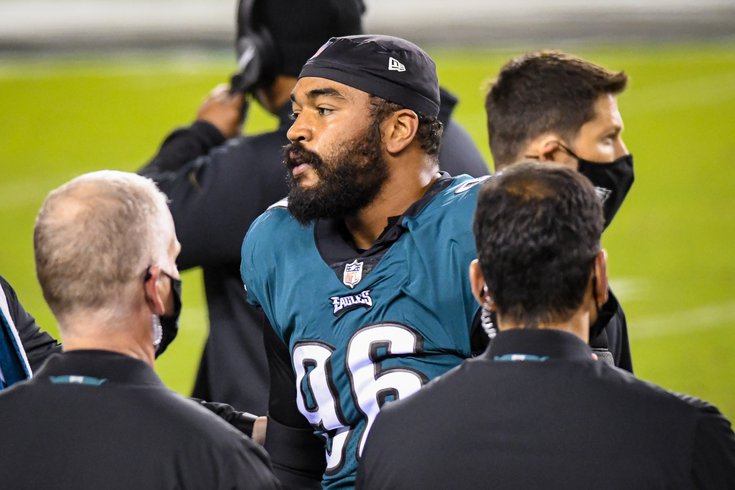 During the Philadelphia Eagles' win over the Detroit Lions on Sunday, Derek Barnett was rushing the quarterback off the right side of the defensive line, and he went down to the ground on what looked like a non-contact injury. Trainers immediately rushed onto the field to attend to Barnett, and some teammates gathered to take a knee around him. Barnett was able to walk off the field under his own power, but he did not return to the game.

On Monday it is being reported that Barnett has torn an ACL, and his season is over.

An MRI revealed that Eagles’ DE Derek Barnett suffered a season-ending torn ACL during Sunday’s win over the Detroit Lions, per source.

The remaining defensive ends on the roster include Josh Sweat, Brandon Graham, and Tarron Jackson. Jackson was a healthy scratch on Sunday in Detroit.

Barnett contributed as a rookie during the Eagles' Super Bowl run in 2017, but in his first four seasons in the NFL (from 2017-2020), he had just 19.5 sacks, a number that fell short of reasonable expectations of a player 14th overall.

Some of Barnett's lack of production was attributed to injuries, as he missed 10 games in 2018, two games in 2019, and three games in 2020. He also probably wasn't 100 percent in many of the games he played those seasons.

In 2021, his first truly healthy season in years, Barnett had eight penalties and 2.5 sacks. He was expected to sign elsewhere after testing the open market this offseason, but he eventually signed back with the Eagles a two-year deal worth $14 million.