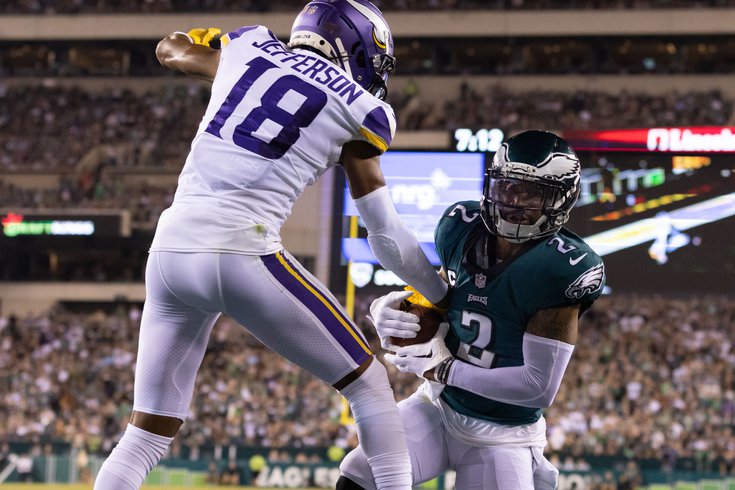 Vikings star receiver Justin Jefferson was largely held in check during the Eagles 24-7 win on 'Monday Night Football.' A Minnesota fan had a hard time listening to announcer Joe Buck on the broadcast and let her feelings out on TikTok.

The fears of many Eagles fans heading into Monday night's primetime game against the Vikings turned out to be unfounded, as Minnesota's vaunted offense failed to sustain drives and Jalen Hurts carved up the defense on the ground and through the air.

Back in 2017-18, before the Eagles' legendary 38-7 rout of the Vikings in the NFC Championship Game, both of these teams were still without Super Bowl victories. That beatdown bred a lot of ill will in Minnesota fan circles, evidenced by the increasingly vitriolic "Why Your Team Sucks" articles from Defector's Drew Magary, a long-suffering Vikings fan who this year got heated about dudes in Philly having five o' clock shadows, of all things. The "I hate your face" argument is always a telltale sign of bitter and irrational resignation, and Magary's not been much easier on the Vikings over the years.

The Minnesota Vikings are my favorite NFL team. I fucking hate them. https://t.co/6rTwoYJ7IP

Then you get a guy like this at the Linc on Monday night.

It would be lame and patronizing to feign empathy for Vikings fans, who have comforted themselves for a few seasons now with landing Justin Jefferson as a result of a classic Philly front office whiff. Minnesota deserved Jefferson for that every bit as much as they now deserve Jalen Reagor, too.

It's fair game to get a good laugh out of disgusted Vikings fans watching their team lose to the Eagles. A great video surfaced Monday night (h/t CrossingBroad) of a woman named Jackie who went in on the Vikings and "Monday Night Football" announcer Joe Buck. The video is longer than it needed to be, but it actually gets more funny as it continues.

"F***ing Joe Buck. He's irritating the hell out of me," the woman says. "You know, when you're losing, it's already bad enough. And you've got him throwing salt in the wound all night long. Shut the hell up. We already know, Joe."

Buck was a bit easier to ignore during those afternoon games on FOX, but on "Monday Night Football," we have Joe Buck getting paid a lot more to be Joe Buck. He's not really a problem if you're winning, as some Eagles fans were pleasantly surprised to discover.

If you're not winning, you're pouring Miller Lite into a mug as you curse your kitchen TV and wish that Stefon Diggs would share some of those touchdowns with his former team.

This lady's whole aura is pretty endearing, to tell the truth. This is one of those situations where the Vikings and Eagles could still meet in the playoffs, so it's best to just take the win and move along.