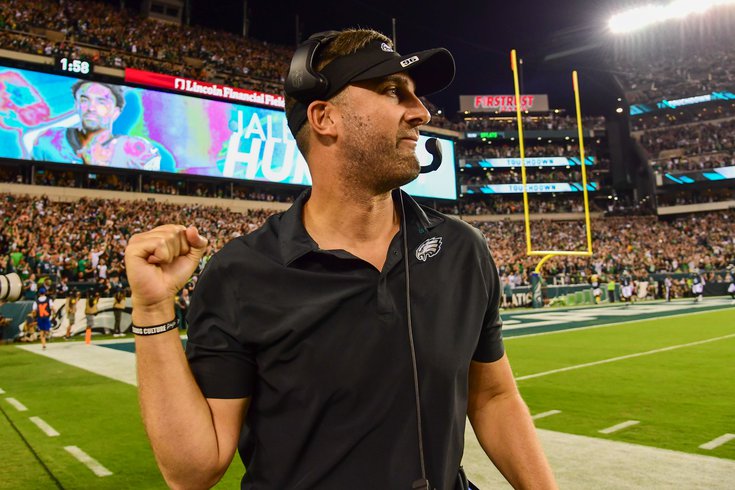 Nick Sirianni is happy to move up in the power rankings.

Here's where people have the Birds ranked after Week 3. Oh, and here's our version of these sellout rankings, too.

The Eagles have hit the ground running. Nick Sirianni's team dominated on both sides of the ball in a 24-7 win over the Vikings at raucous Lincoln Financial Field. Jalen Hurts again looked the part of a star on the rise, throwing for 333 yards while accounting for three total touchdowns. The star of the other side of the ball was cornerback Darius Slay, who will continue to intercept passes in Kirk Cousins' nightmares for the next several evenings. The Eagles are a team without an obvious weakness right now -- and upcoming matchups against the Commanders and Jaguars provide a recipe for more good times.

#JimmySays: To expand on the upcoming schedule point, here are the Eagles' next eight games:

The Eagles are better than all eight of those teams.

The thought was always that if Jalen Hurts didn’t peak a year ago, the sky would be the limit for this roster. Well, Monday night’s stomping of the Vikings leads us to believe the Eagles might be in for some late January football this year.

#JimmySays: The Rams and Packers are ahead of the Eagles here based on past seasons, because they certainly have not looked better than Philly in 2022.

Let’s overreact. Jalen Hurts played what might have been the best game of his young career in prime time. One week after carving up the Lions with his legs against a blitz- and man-heavy game plan, he did the same to the Vikings thanks to precision passing and the well-timed designed run. A.J. Brown, DeVonta Smith and Dallas Goedert form one of the league’s best trio of offensive weapons, and the offensive line is arguably the best in football. And all of a sudden, the defense is part of the party, too. By EPA per drive, the Eagles’ defense had the fifth-best performance of the young season and the third-best of Jonathan Gannon’s young career as a defensive coordinator.

With the second-easiest schedule in the league, according to preseason projected win totals, the Eagles have what looks like a realistic path to a first-round bye and home-field advantage in the NFC.

#JimmySays: I don't think that's an overreaction at all, Bo.

No specific analysis given on the Eagles here, but they fall into the "Flawed Postseason Contenders" category.

#JimmySays: I'm not saying the Eagles are flawless, but I'd be curious to hear them unpack what flaws they see, relative to the teams ahead of them.

It's just two weeks into the 2022 season, but the Philadelphia Eagles look like the class of the NFC East.

And quarterback Jalen Hurts looks like an evolving player.

It's not just that Hurts damaged the Vikings running the ball, scrambling for 57 yards and two scores on 11 carries. We've become accustomed to seeing that from the third-year pro. But Hurts also carved up the Vikings through the air, completing 26 of 31 passes for 333 yards with a passer rating of 108.7. All told, the Eagles racked up a whopping 486 yards of offense.

They also posted an impressive defensive effort against a Minnesota offense that rolled the Green Bay Packers in Week 1. The Eagles allowed just 264 yards of offense, held the Vikings to four third-down conversions on 12 attempts and picked off Kirk Cousins three times.

#JimmySays: Yep, like we said in the Hierarchy, statement win.

Jalen Hurts has improved every year since he was a freshman at Alabama. Eagles are going to have to pay that man.

#JimmySays: Hurts' play is certainly exceeding our "Malkovich Meridian," which we set back in July.

As long as Jalen Hurts continues to play at a high level, they are a legit Super Bowl contender. The defense was better against Minnesota as well.