Siposs made an unsung play in the Eagles' win over the Vikings, showcasing how in sync this entire roster is. 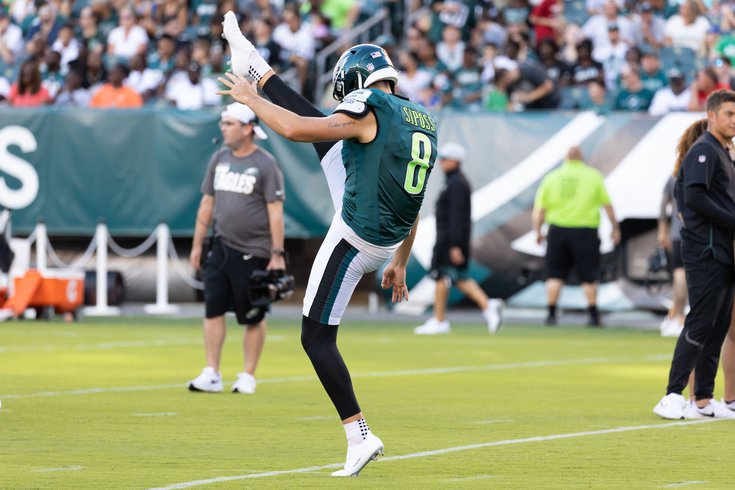 Eagles punter Arryn Siposs, shown during the Eagles' open practice back on August 7, got to show off his jets Monday night against the Viking.

Lost in the fanfare of Jalen Hurts playing like an MVP and Darius Slay going full Prime Time mode was a small, yet incredibly important, play in the Eagles' win over the Vikings on Monday.

With 3:17 remaining in the third quarter, the Birds lined up to kick a 41-yard field goal while leading 24-7. Going up 20 late in the third quarter would've just added to the team's dominant performance against Minnesota. Things went awry, however, when Vikings cornerback Patrick Peterson blocked the field goal attempt:

As Minnesota defensive back Kris Boyd scooped up the ball, it looked like he had a clear path to score a touchdown and cut the Eagles' lead to 10 with the fourth quarter still to go. It would've been a dicey situation for the Eagles, but punter and field goal holder Arryn Siposs looked at the god of death, said, "Not today," and raced down the field to prevent Boyd from hitting the end zone. An ensuing Kirk Cousins interception helped preserve the Eagles' 17-point lead that they would never relinquish.

"We obviously talk to our offense a lot about — we talk to them an awful lot about if there is a turnover, we have to go and make that tackle, just like our offense did," Sirianni said. "We have a ton of team meetings about situational football. That's a situation within the game that you have to be able to react and go. It somehow got into Arryn's head, too, to be like I have to get this guy down and let the defense play defense here."

Siposs didn't look like a run-of-the-mill punter out there, sprinting down the field as if he was a safety stopping a wide receiver from reaching pay dirt.

"That's just guys giving of themselves to their teammates, too, like to track him down like that. Heck of a tackle."

Sirianni joked about Siposs' speed on that play, saying, "His jets are not on display very often, and I'm not sure I knew that. It was impressive. Rugby guy, so I'm sure there is some tape somewhere. We'll find it. We'll find the tape."

(Coincidentally, that was former Eagles offensive coordinator Frank Reich as Buffalo's quarterback in that video).

The 2022 Eagles are already drawing comparisons to the legendary 2017 squad. Plays like this one, where even the forgotten man on the back of the roster makes a key contribution, hammer home what a special team this roster can be and makes that comp apt.