Eagles-Commanders: An early look at the odds

The Eagles are opening as a 6.5-point favorite against Carson Wentz and the Commanders across several sportsbooks 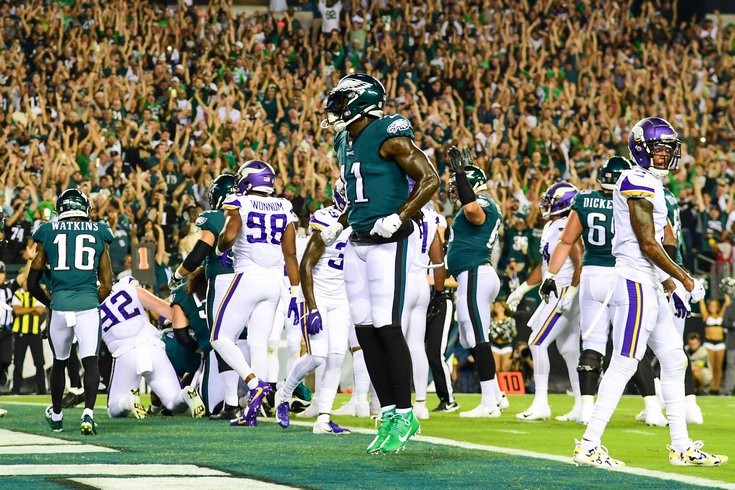 Understandably, the Eagles are opening as huge favorites against Washington on Sunday.

Jalen Hurts turned in his best performance yet under center, Darius Slay hauled in two interceptions and probably should've had at least two more covering Justin Jefferson, and the defense as a whole shut down a high-powered Vikings offense in a 24-7 win that may have cemented the Eagles as the best team in the NFC on Monday night.

How do old friend Carson Wentz and the Commanders look–Ohhh...

In fairness, the Commanders did mount a second-half comeback that fell short in a 36-27 loss to Detroit, and they did beat Doug Pederson's Jacksonville Jaguars the week before. That said, I'm willing to bet that Wentz rather not see Aidan Hutchinson anytime soon.

Aidan Hutchinson has THREE SACKS in the first half 😳 (via @NFL) pic.twitter.com/PsNZcVHDWO

Anyway, the Eagles, at 2-0, are opening as 6.5-point favorites against the Commanders, at 1-1, for Sunday's game down in Landover.

Here is a quick look at the odds across several sportsbooks:

By comparison, the Eagles opened as 1.5-point favorites for Monday night's win over Minnesota, which was originally sparked by a shaky defensive performance from Philly in Week 1 and a dominant effort by the Vikings over Green Bay.

A lot can change in just a few days, a few hours even. Take Hurts' MVP odds for example.

Eagles-Commanders kicks off at 1 p.m. on Sunday