Eytan Shander: Remember the good times, not the bad, when it comes to Carson Wentz 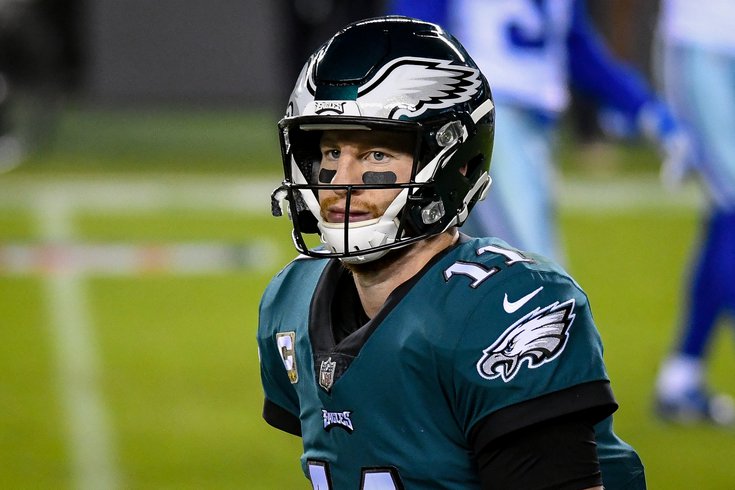 Jonathan Papelbon is a bozo.

Nobody would mistake him as worthy of any pre-game celebration, nor any standing ovation. Doug Pederson would be a good example of someone on the other side of that spectrum: worthy of anything you can give the man.

Somewhere between that wide gap sits Carson Wentz and his complicated past with the Eagles and us, the fan base. We’ve seen too many examples of top talent take too long to be remembered the right way. You don’t have to be old enough to remember Mike Schmidt as you probably lived through it with Donovan McNabb.

Some players only spent enough time to matter but not truly matter in the sense of history. Terrell Owens made an immediate impact but won’t be remembered as an Eagle. Nor should he.

Will Carson? Would he want to be?

The answer is yes to both and remains one of the more enigmatic situations of a former player and the reception he gets. This isn’t just about him wearing an opposing jersey — within the division no less. Rather moving forward. There are too many positives surrounding what he did to relegate him to Ben Simmons status.

But he also didn’t want to play here anymore, much like Simmons, but for different reasons. Some guys aren’t fit for it, other players just don’t like it here. This isn’t a pom-poms column for Wentz, but we have to identify where he is on this ridiculous spectrum of treatment. Otherwise, we may be doomed to repeat the same mistakes made with Schmidt, McNabb and even legends like Joe Frazier.

Ever since an older family member brought me down to watch Eagles games as a child, I knew how important the city meant to the team — and how vital winning a Super Bowl is was. As much as Wentz was an irritant and bothered some people inside the organization — he was a winner here.

The MVP-like season during that Super Bowl run coincided with a top defense better than that last soft-serve swirl on the boardwalk. It was a thing of beauty and then he went down.

Then Nick Foles happened and what can we say? It was this beautiful combination of Foles and Pederson that captivated us while shocking the rest of the NFL. It was so easy to forget Wentz that most of us did. We even partook in silly parlor games asking who should start the following season, asking if Wentz truly deserved to retain the starting spot.

A weaker and less-informed individual writing for a “national” rag would turn to you, blaming the media and fans for how and why Wentz left. I know better. I saw and heard tons of positive support even through his departure. He was polarizing, as he should remain due to the nature of how crazy the ups and downs were, but he was not Ben Simmons. He sure as hell was not Papelbon.

The difference now is that he’s played for some other teams and it’s easy to forget the good while he was here, even if it’s remembering just that one season. That’s what 2017 was all about — the magic that can be captured in just one season, and Wentz’s story is part of it. We see far too many times in history where things of much larger magnitude fade or are twisted due to time and ignorance. It’s happened with enough of our former athletes.

So, welcome back, Carson Wentz… kinda.

This game should have so much drama spilling out from all sides. Carson Wentz and the Commanders are moving the ball in the air, they just forgot to show up in Detroit. Yes, Wentz is going to make a bonehead play and probably lose the game for Washington, but the Eagles won’t pull away until the second half. Jalen Hurts and the offense will be okay, but a couple of stalled drives combined with Washington getting some big plays early, will be the difference. The Eagles don’t have to be down either for this to hit, I just think they aren’t up by more than a FG. The Commanders players are well aware of how much this game means to their QB  — who they still like and support, for now.