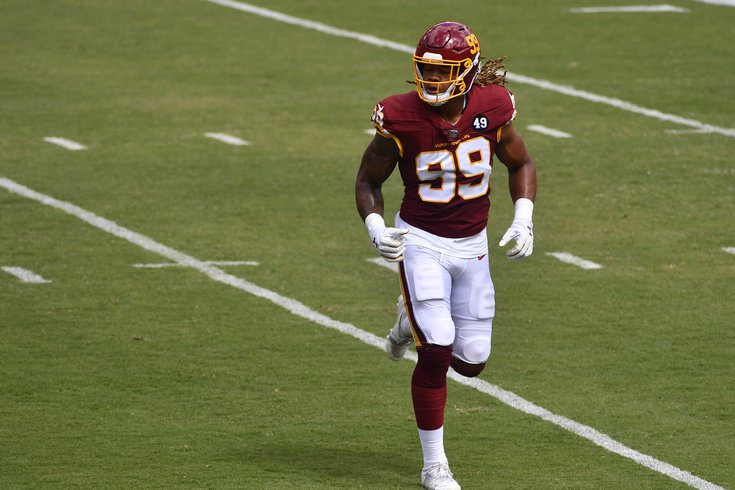 Commanders DE Chase Young will be out Week 3 against the Eagles as he continues to rehab a torn ACL suffered last season.

The Philadelphia Eagles remain a very healthy team after the first two weeks of the season, with their only notable long-term injuries being suffered by DE Derek Barnett and backup LT Andre Dillard. The Washington Commanders have some significant injuries to overcome on both sides of the ball.

• The Eagles had a walkthrough on Wednesday, so the injury report is an estimation of participation if it were a regular practice.

• We’ll monitor Watkins as the week progresses. Reddick and Maddox were at least (projected) limited participants, so no need to worry all that much about them, for now.

• Landon Dickerson is a surprise late addition to the injury report. He did not practice on Friday (bad sign), and is questionable for Sunday. If he can't go, Sua Opeta would likely start at LG.

• Schweitzer's full participation in practice is big for the Commanders. With starting center Chase Roullier out, we outlined Washington's options along their offensive line in our five matchups to watch.

• It looks like the Commanders will have Kam Curl back. He missed each of the first two games.

• Holcomb and Turner will be worth monitoring as the week progresses. Holcomb is the Commanders' top linebacker, while Turner is likely to start at RG.

• Holcomb and Turner should be good to go for Sunday.

• The Commanders have two defensive linemen (DE Chase Young and DT Phidarian Mathis) on PUP or IR, two (DE Casey Toohill and DT Daniel Wise) who are ruled out, and one (James Smith-Williams) who is questionable. Add in that the Commanders lost Matt Ioannidis and Tim Settle in free agency this offseason, and they are paper thin along their defensive line. They only have six healthy defensive linemen — Montez Sweat, Jonathan Allen, Daron Payne, Shaka Toney, Efe Obada, and John Ridgeway. They're going to have to add a player or two to their roster (likely from the practice squad) prior to gameday. The Eagles would be smart to try to exploit that lack of D-line depth.

• DE Chase Young (PUP): Young is still recovering from a torn ACL suffered last season. He is on Reserve/PUP, and will miss the first four weeks of the regular season.

• C Chase Roullier (IR): Roullier is the Commanders' starting center, and a good player. His season is in jeopardy after he suffered a lower leg injury against the Lions Week 2. Starting RG Wes Schweitzer would likely start at center in Roullier's absence, but Schweitzer has been banged up as well, as he missed the Commanders' Week 2 game in Detroit with a hamstring injury. We hypothesized on what the Commanders will do along their line in our five matchups to watch.

• RB Brian Robinson (NFI): Robinson was the victim of an attempted carjacking, during which he sustained multiple gunshot wounds. He was poised to take over starting running back duties from incumbent Antonio Gibson, but those plans were set back by his unfortunate incident. Robinson amazingly returned to practice last week, and could return to the field in October.

• DT Phidarian Mathis (IR): Mathis was the Commanders' second-round pick this year. He tore his meniscus Week 1 and his season is over.