Eagles mailbag: What Philadelphians can bring the best 'vibes' to Lincoln Financial Field? 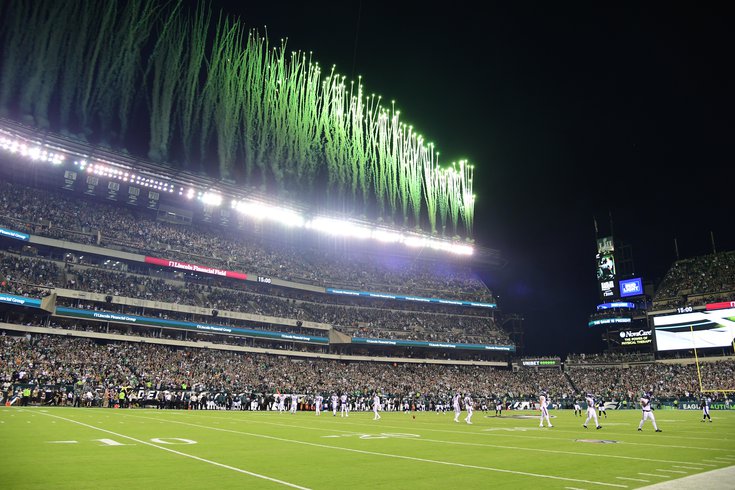 Another Eagles win, another Eagles mailbag! After taking down the Vikings 24-7 on Monday Night Football, the Birds are buzzing right now in the greatest city in the known universe. With fans all worked up over this 2-0 team, let's get to some new reader questions....

@AgliataJake: Loved seeing Harden and Bryce at the game last night and so cool for Hurts to acknowledge the support for other Philly teams after the game. Which other players from the Sixers, Phillies, Flyers, and Union can bring the best vibes to the Linc?

Good question, Jake. I'm going to expand this to focus on all famous Philadelphians and celebrities. I was at Lincoln Financial Field on Monday (my first regular season game as a media member!). The windows are closed in the press box, but you could still hear that crowd rocking. It was electric. Given the opponent and the Eagles' double-digit win, it was easy to draw comparisons to the legendary 2017 NFC Championship Game.

From what I saw, Bryce Harper, James Harden, Rhys Hoskins and Bradley Cooper were all there. Darius Slay handed one of the balls he intercepted off Kirk Cousins to Harden, creating enough energy to tear a wormhole into Philly Twitter. The Eagles won because they're a damn good football team and the crowd was ballistic because it was a prime time home opener, but those big names definitely added to the atmosphere.

Here are some other people who could bring similar vibes...

• 2008 Phillies: The first championship team of many Philadelphians' lives, mine included. Jimmy Rollins, Chase Utley, Ryan Howard and Cole Hamels are all legends in this city and would be great to see at the Linc. Imagine seeing Pat Burrell chugging a beer on the jumbotron. Incredible.

• 2017 Eagles: Some of those Super Bowl champions are still on the roster, but guys like Chris Long, Beau Allen, Brent Celek and LeGarrette Blount would be perfect to have there, especially since they still have tangible connections to the current roster. Patrick Robinson should be shown on the big screen whenever the Eagles host the Vikings.

• Current stars: No one "gets it" quite like Harper. He's perfect to go to these things. Harden too. The Sixers have their first game of the season two days after the Eagles' Week 6 Sunday Night Football matchup with the Cowboys. Get Harden, Joel Embiid and Tyrese Maxey there. Doc Rivers can stay home. I don't think anyone on the Flyers is moving the needle in this type of setting sadly. Dawn Staley, come on down too!

• Former stars: Allen Iverson is a Cowboys fan who rocks Dallas gear, so he's unfortunately out. Is Eric Lindros around? Have Harold Carmichael and Jeremiah Trotter as the Eagles alum of the game at some point this season.

• Celebs: B-Coop was there on Monday. He was wearing a dope Iverson t-shirt. My buddy who I'll call "Big Oil" texted me and said Cooper should only wear a white DeSean Jackson at Eagles games in tribute of his character in "Silver Linings Playbook." I agree! How about Dowingtown's own Miles Teller? He's hosting the season premiere of "Saturday Night Live" on October 1. Let's get a Questlove pregame concert! I will always adore the "Rocky" films, but Sylvester Stallone should be "retired" as a celebrity guest after the Eagles lost the first game at Lincoln Financial Field following these antics:

A guy I'm out on for Eagles games though: Mike Trout. Sorry, Mike. It's not personal. Well, I guess it is, but I'm out. He was the chosen one and stayed in Los Angeles. Does living in Southern California most of the year and making hundreds of millions of dollars sound good? Of course. Trout gets his autumns free because the Angels are a loser organization and then he can just go to Eagles games. Not a bad life! He doesn't want to be The Guy on a Philly team and the pressure that comes with it. Whatever. He ran from his destiny.

@JeffMcDev: i sort of want to cop a hurts #2 jersey to show ive been down with him since day 1. am i an idiot or the man?

Another great question, this one coming from the honorable Jeff McDevitt. It's obvious that I was a fan before I was a media member at PhillyVoice. Well-documented stuff! So, I was huge jersey freak who would buy a Reebok Correll Buckhalter jersey for $15 at 3:00 a.m on eBay. Hey, it's that energy that carries over to my writing now. I like where your head's at, Jeff. In fact, I actually bought a No. 2 Jalen Hurts jersey in early 2021 after he changed his number to 1,  getting it on a steep discount from Fanatics.

I wanted Hurts to take over for Carson Wentz by November of Hurts' rookie season, so I was all about No. 2-era Hurts and still think that the pairing of Hurts and Doug Pederson could've cooked up something akin to with what we're seeing now between Hurts and Nick Sirianni. Anyway, yeah, it's a hipster jersey choice, but it lets people know you were rocking with Hurts from his rookie season on.

After the Eagles beat the Saints in Hurts' first career start as an Eagle in 2020, I went down to the pro shop at the Linc to get one customized for my fiance Ashley. They said it was the first youth-sized Hurts jersey they made. As Howard Ratner would say, "That's history right there, you understand?" Follow Ash's lead and get on it, Jeff!

I will say there is a somewhat recent example of this. LeSean McCoy wore No. 29 as a rookie in 2009 before changing to No. 25 the following season. No. 25 is a great running back number. 29 is terrible and just didn't fit McCoy's style at all. I've seen No. 29 Shady jerseys in the wild since and they don't look great, but I do give them props for having the OG one. A positive for Hurts here is that No. 2 works for him as a QB as much as No. 1 does. I might like No. 2 for him more if we're getting totally into the jersey analytics of it all!

You're not an idiot, Jeff. You've never been one. Just imagine Harry Kalas telling you that you're "The Man." It's true.

@Rich_Bobbe: Other than golf, what are some fun things to do in Arizona in February?

My aforementioned fiance's parents live in Tucson, Arizona. Could be a nice double-dip trip to the desert for me in February! I looked up to see if the Sixers play the Suns in Phoenix around that time of the year, but, alas, they don't until March 25. The Arizona Wildcats basketball doesn't have any home games leading up to the Super Bowl on February 12. I'm not a golf guy, Rich, but you might be otherwise stuck playing some golf.

A reminder to those dreaming of a magical February... Arizona gets cold at night! In a timeline where the Eagles are playing in the Super Bowl, fans shouldn't forget to pack a Kelly green hoodie.

@twitrunner8: I’m curious what we know about why eagles passed on Brian Daboll and went w Sirianni. Doesn’t look like a bad choice, curious what it might say about what they thought about BD

Do we know that the Eagles passed on Brian Daboll? When Sirianni was hired in the 2021 offseason, Daboll remained the offensive coordinator for the Bills for another season before becoming the Giants' head coach this year. In doing some cursory research, I saw this report from CBS Sports' Jason La Canfora from January 2021 that reads, "Bills denied Eagles permission to interview Brian Daboll prior to Philadelphia hiring Nick Sirianni." I thought Daboll was the guy the Eagles should've hired last year, but things are clearly working out well with Sirianni. It's not something Eagles fans should dwell on. Ride the wave!

@Rauch_iv: both Smith and Brown have had amazing games so far this season but do you think it is a genuine concern neither has a touchdown yet even with the production in yards?

Not at all. Based on Week 2, those dudes are getting their touches and yards even if they're not finding the end zone. In an offense where Hurts is running the show, the team's red zone attack is going to heavily feature Hurts' ability with his legs. He already has three rushing touchdowns on the year. If it was a situation like Week 1 where DeVonta Smith isn't getting a single catch, yes, that's something that can't keep happening. If the Birds' offense keeps racking up touchdowns any possible way they come and the Eagles keep winning games, I don't expect those guys to fret about their touchdown numbers.

@FlyGoalScoredBy: haven’t heard a peep about Nakobi Dean in awhile, 3 snaps week 1…cause for concern?

This tweet was sent to me before the Eagles' matchup with the Vikings. Rookie linebacker Nakobe Dean played three defensive snaps in Week 1. He played... zero in Week 2. I had assumed that if he was healthy, Dean would be an immediate starter even as a third-round pick. This slow start to his career does nothing to take away from the player he could become in a year or two, but the Eagles' top-two linebackers right now are playing really well.

This all might say more about fourth-year player T.J. Edwards and free agent signee Kyzir White, who were dynamite on Monday. The Eagles are going to play nickel predominantly and won't play three-LB sets much. There's just not room for Dean on the field right now.

Cause for concern? I wouldn't go there just yet. I'm still of the mindset that he's going to be a good pro, but fans would've loved to see him "win" a linebacker job in camp. Edwards was fantastic in training camp and White played pretty well too, so it just didn't work out. Let's see where his snap count is come November. Injuries could thrust him into a larger role, but it might ultimately be a faux-redshirt year for Dean.

@CitizensBankers: What's the weather going to be like at the parade?

As long as it's not raining, any weather should work for Eagles fans. I could tell you every single thing I did on the day of the Eagles' first Super Bowl parade, but couldn't tell you a single thing about how cold it was. That's how it should be.