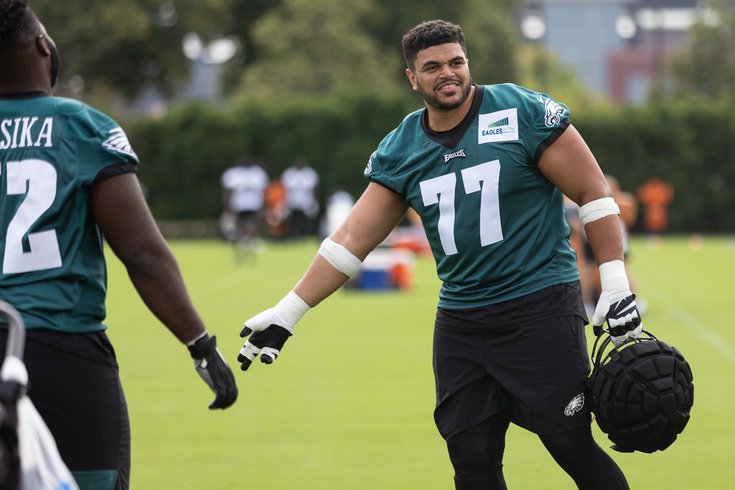 Philadelphia Eagles backup LT Andre Dillard was injured in practice today, and is expected to miss some time. Mike Garafolo of NFL Network has the details of the injury and an early guess on his availability this season.

#Eagles T Andre Dillard suffered a nondisplaced fracture in his forearm in practice today, sources say. Further testing is needed to determine the best course of action and timeline for a return but the expectation is Dillard will be available for a majority of the season.

Hat tip to the "Let's Go To the Phones" guys, who were on it first.

Dillard had a rough rookie season in 2019 followed by a torn biceps injury that caused him to miss the entirety of the 2020 season. In 2021, he entered training camp in a battle with Jordan Mailata for the starting LT job, but it was clear after just a small handful of practices that Mailata was the far superior player.

He did end up starting five games at LT in 2021 (two in relief of an injured Mailata, two when Lane Johnson was out with his personal issue, and the meaningless Week 18 game against the Cowboys). It has just sort of been accepted as truth that Dillard played well whenever he was called upon to fill in. I was curious to take a closer look, however, so I took a comprehensive look at Dillard's 2021 season in June.

He got out to a great start, filling in for an injured Mailata against the Cowboys Week 3. We reviewed this game by Dillard during the 2021 season, and gave him high marks. It remains the best game of his career. I also thought he had a solid game Week 5 against the Panthers, working against speed rushers like Brian Burns and Haason Reddick.

However, he had poor performances against the Chiefs, Buccaneers, and Raiders, and he was up and down against the Cowboys in the meaningless Week 18 game against Dallas. In summary, Dillard did not play as well in 2021 as originally perceived. It's also worth noting that in the Eagles' playoff game against the Buccaneers, Johnson went down with an injury and Le'Raven Clark filled in, not Dillard.

Dillard had the best training camp of his career in 2022 after building more strength in the offseason, but he was shaky in the Eagles' preseason games.

Because of his imperfect fit on this roster due his inability to play any offensive line spots other than left tackle, Dillard has been the subject of trade speculation ever since he lost his camp battle to Mailata. Still, offensive line depth is kind of a big deal in the NFL, as we have seen with this Eagles team, and the 2022 Eagles could very well be contenders. As such, Dillard has value to the team, even if only as Mailata insurance. Because the Eagles no doubt have a high asking price for Dillard, and because he put less than stellar play on tape during the preseason games, a trade of Dillard was already very unlikely. Now, forget it.

The Eagles remain stacked along their offensive line, and should be able to weather this setback. Should Dillard land on injured reserve, he will miss at least four games.