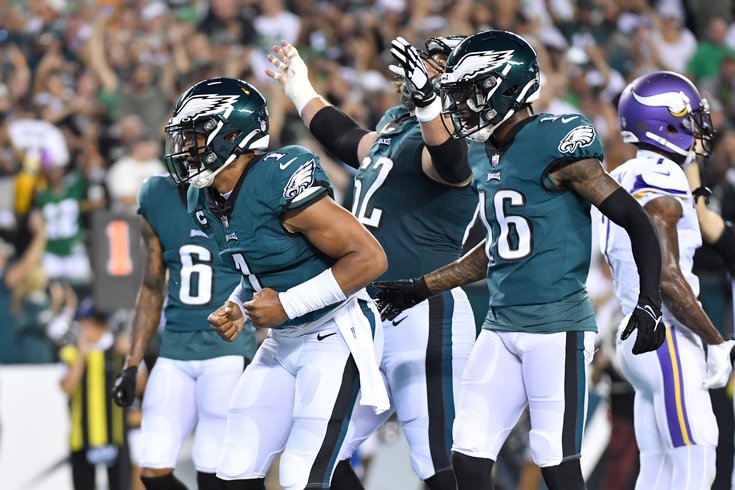 Pro Football Focus grades: they're great if they fit your narrative and terrible if they don't! With the Eagles crushing the competition on the way to a 3-0 start, I'm sure Birds fans can't get enough positive buzz surrounding the team. PFF, the statistical grading platform, is high on the Eagles three weeks into this season with star performances all over the field.

Heading into Week 4 of the 2022 NFL season, here are how various Eagles grade out on PFF and how they rank among their peers at their respective positions:

• Jalen Hurts is still soaring. For a pure passing grade, Hurts is No. 1, but the way Ravens quarterback Lamar Jackson has affected the game with his legs has him in the top overall spot.

• Look at the sorry cast of receivers the Eagles have had for most of the 21st century. Now they have two legit top-flight wideouts with A.J. Brown and DeVonta Smith. Things are just clicking perfectly with Hurts' connection to both Brown and Smith.

• Obviously, PFF grades aren't definitive and are a fun thing to discuss, but Lane Johnson is not the seventh-best offensive tackle in the sport. He's top three and I don't think he's three!

• What a climb for T.J. Edwards. He was undrafted in 2019. Edwards had the best training camp of any Eagle this summer and is carrying that into this young season. When was the last time the Eagles had a good linebacker who was 26 or younger? In my rough estimation, it was 2001 Jeremiah Trotter.

• Jordan Davis. What a force. The dude has zero sacks and just four hurries so far in his rookie campaign, but his presence can collapse a pocket and draw double teams, which has led to Fletcher Cox looking revitalized in his age-32 season.

• Avonte Maddox was so miscast as an outside corner. He's crushing it in the slot. I dig the way defensive coordinator Jonathan Gannon has utilized him as a blitzer too.

For overall team stats, the Eagles are juggernauts in PFF's eyes:

• If you have the best passing attack, the best receivers and the best offensive line, your team is going to be pretty good! #Analysis

• Facing Carson Wentz led to the Eagles' pass rush grade jumping. I want to see if the front of this D can keep their foot on the gas all season long and prove that it wasn't a one-game outlier.

• The upstart 2-1 Jaguars are 12th in PFF's overall team grades. They will be the Eagles' biggest test yet on Sunday.