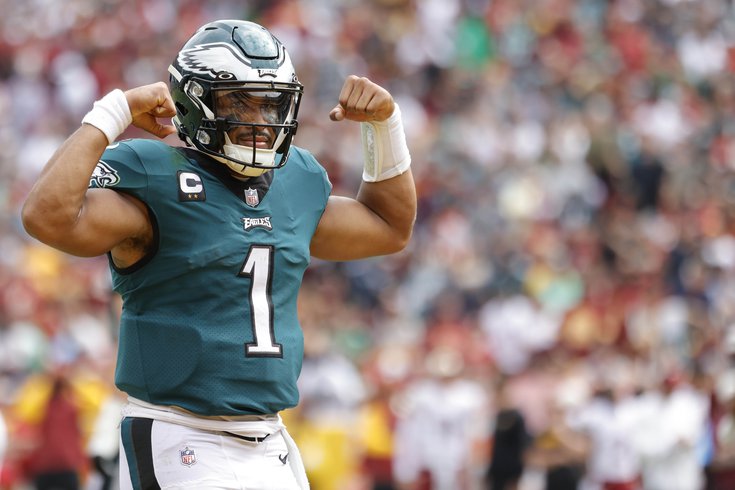 The Eagles have been the best team in the NFC over the first three weeks of the 2022 season, and it hasn't really even been close.

Week 3 of the NFL season is in the books, and the Philadelphia Eagles are the NFC's lone remaining undefeated team. We have no new obituaries this early in the season, so let's just get right to the hierarchy.

16) Seahawks (1-2): With DK Metcalf and Tyler Lockett both under contract through 2025, the Seahawks will be a good landing spot for a quarterback in the 2023 NFL Draft, and they're going to lose enough games this year to get one.

15) Panthers (1-2): With the Panthers' win over the Saints and the Falcons' win over the Seahawks, every team in the NFC now has at least one win. I was hoping to kill one of these teams off this week, but I guess I can't yet.

14) Commanders (1-2): You can't see what is/isn't open down the field for Carson Wentz in this view of the nine sacks he took on Sunday, but you can still pretty easily tell that at least four or five of them were on him.

The Commanders had negative passing yards for most of this game, and only got back on the positive side with less than three minutes left in the third quarter.

13) Falcons (1-2): Cordarrelle Patterson had several highlight reel runs on Sunday. It only took until he was in his 30s for someone to realize, "Oh hey, maybe he's a running back."

The Falcons have been in three tight games this year. They're not good, obviously, but they're not the disaster I thought they might be.

Justin Fields on a 3rd & long missing multiple first down throws here on a version of smash. No idea what he is looking at. This is rough from the pocket. Fortunately his feet bail him out. #DaBears
🔜Full-game analysis for the QBSPC only.
Join: https://t.co/l0CJd0icXb pic.twitter.com/V0j2ojskpq

He has a high of 8 completions and 121 passing yards, lol.

11) Cardinals (1-2): On the opposite side of the pass attempt spectrum, there's Kyler Murray:

Murray is averaging an atrocious 5.6 yards per pass attempt.

10) Giants (2-1): Giants seventh overall pick Evan Neal had a rough night on national television trying to block DeMarcus Lawrence and Micah Parsons. The sentiment on Twitter as well as on the telecast was that the Giants needed to give him some help, but it looked to me like he actually had help. He and the help often couldn't block Neal's guy. Neal is a rookie and Lawrence/Parsons are both pretty good, but that could be a year-long struggle.

9) Saints (1-2): If the season ended today, the Saints pick in the first round owned by the Eagles would be seventh overall.

8) Lions (1-2): Dan Campbell gets his team to play hard, but he has no idea what he's doing in game situations. We covered his gaffes at the end of the first half in each of the Eagles' past two games against the Lions (here and here). He had another bad one at the end of the game against the Vikings.

With a 3-point lead and 1:10 remaining in the fourth quarter, the Lions faced a 4th and 4 from the Vikings' 36-yard line. The Vikings had no timeouts left, so a first down would have immediately won the game. A made 54-yard field goal would put them up by 6, but would have also given the Vikings a chance to drive the field for a touchdown. The clear decision was to go for it.

I don't know if the above factors in the quality of the kicker, but the Lions don't have a good long-range kicker. Their kicker is Austin Seibert, who has a career long field goal of 53 yards and heading into Sunday was 2/5 over his career on 50-plus yard kicks.

Campbell elected to try the field goal. Seibert missed, and three plays later the Vikings were celebrating in the end zone. Credit Campbell for realizing his mistake, I guess.

“I frickin regret my decision there.” - Dan Campbell pic.twitter.com/TMWbyZoURs

It amazes me that every team in the NFL doesn't have a guy in the booth advising the head coach on these in-game decisions after the Eagles' overwhelming success with it during the 2017 season.

The only unbeaten starting QBs this season:

6) 49ers (1-2): A common sentiment was that when the Niners lost Trey Lance for the season, the transition to Jimmy Garoppolo wouldn't be super painful, and that they might even be better off in the short-term. Meh.

What I do know is that Garoppolo makes them far more boring to watch, and this team still has four more primetime games this season.

5) Vikings (2-1): When Kirk Cousins plays in primetime or against a good team, he folds faster than Superman on laundry day. But at 1:00 p.m. against the Lions? Dude has ice water in his veins. Next week he plays in London at 9:30 a.m. against the Saints. Will the even earlier time make him an MVP-level player, or will the added international exposure make him bad again?

3) Buccaneers (2-1): Tom Brady got away with delay of game on a late TD drive against the Packers.

@TomBrady just got away with delay of game...but called for it on the 2 point conversion 😂 Talking about #MakeUpCall pic.twitter.com/5V4hR5C2ow

He did not get away with it on the 2-point conversion.

Pretty inexcusable. Tom Brady with a delay of game penalty on the game-tying 2-pt attempt…at home. Looks he would have walked right in. Can’t happen at the #NFL level. #BucsVsPackers pic.twitter.com/5aoKsi8r3z

The NFL should maybe fix the way they officiate delay of game, but that's just me.

2) Packers (2-1): Even when they don't look right — and they're averaging 16 points per game — the Packers are still going to win 12-plus games this year. Their next four games are against the Patri*ts, Giants, Jets, and Commanders.

1) Eagles (3-0): As noted in our Eagles dumpster fire piece from back in June, a concern of mine about this team heading into the 2022 season was their slow starts to games. Over the last six games of the season in 2021 (omitting the meaningless Week 18 game against the Cowboys), the Eagles were outscored 49-7 in the first quarter.

This year, different story. The Eagles have come out and wrecked their opponents in the first halves of games.

Eagles are out-gaining opponents by 652 yards in the first half this season. No other team is higher than +324.

Small sample, but sign of a well-coached, well-prepared team?

That is indeed a great sign for this very young coaching staff.