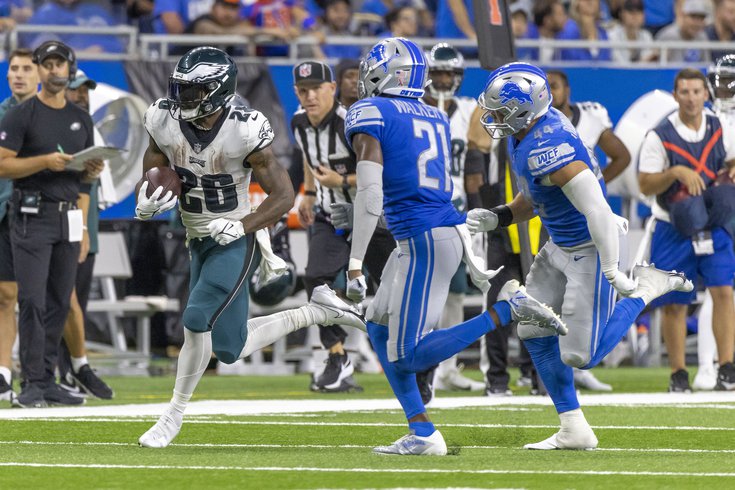 The Philadelphia Eagles are 1-0, after their 38-35 Week 1 win over the Detroit Lions. It wasn't exactly pretty, but as always, win, lose, or tie, we hand out 10 awards.

It was clear throughout training camp that A.J. Brown was going to be everything as advertised, and then some this season, and he didn't disappoint Week 1. Brown was targeted 13 times, and he had 10 catches for 155 yards, including a 54-yard deep ball at the end of the first half that led to some important points.

Brown made plays at all three levels of the defense, and he broke tackles after the catch like he did so often his first two seasons with the Tennessee Titans. He is the best wide receiver the Eagles have employed since Terrell Owens.

There are certainly things one could nitpick about Hurts' play this afternoon, but ultimately he led the offense to 31 points.

The concern would be that if he carries the ball anywhere near 17 times per game this season like he did on Sunday, that is not a sustainable way of winning over the course of a long season. He will eventually get hurt, or at least nicked up enough that his play will suffer.

The Eagles held short practices all throughout training camp, and they barely played their starters at all in the preseason games. The goal was to field the healthiest team possible heading into Week 1, and, well, mission accomplished, as they had a grand total of zero players on their injury report.

The downside of that approach is that there was clearly some rust. The offense committed more than their share of pre-snap penalties, and the defense's tackling was often atrocious. The Eagles avoided harsh criticism on that front by surviving this game.

The Lions desperately wanted to stop the Eagles' rushing attack after they got steamrolled a season ago. They could not, as the Birds rolled up 216 rushing yards, divided up like so:

In case you didn't notice, Hurts and all three running backs each scored touchdowns. Miles Sanders scored his first touchdown since 2020. 🙌

But the real impressive moment in the run game came in the final four minutes with a three point lead, when everyone in the stadium knew the Eagles were running it, and they still put the game on ice. That final drive:

Sanders' 24-yard run was particularly clutch, as he was initially bottled up, but he stayed upright, bounced it to the perimeter, and made a huge play.

5) The Turning Point Award ↩️: The Eagles' 10 points on each side of halftime

After a James Bradberry pick six gave the Eagles 21 unanswered points in the first half, the Lions engineered a 10-play, 75-yard drive, bringing the score back to 21-14. The Eagles got the ball back with 1:51 to play in the half, and a chance to score points on each side of halftime. They did just that, getting a field goal to close the first half, and then marching 82 yards in 10 plays to open the second half.

When you're able to put up points on both sides of the half like that, you're not going to lose many games. Those two scoring drives put the Eagles up by a score of 31-14, and though the Lions made it interesting, that deficit was too difficult for them to overcome.

During that final possession of the first half, Hurts was sacked, and the Eagles were facing a 2nd and 15 from their own 32. They seemed content to let the clock run, until Dan Campbell incomprehensibly called a timeout with 54 seconds.

Hurts scrambled for 10 yards on 2nd down, and then he hit Brown down the right sideline on the 54-yarder shown above on third down. The Eagles kicked a field goal and re-gained momentum heading into halftime.

What the hell was Campbell doing? If the Lions had gotten a stop in that situation, they likely would have gotten the ball near or inside their own 20, likely with no timeouts left and probably only around 30 seconds to put together scoring drive.

The risk vs. reward benefit in that situation simply wasn't there. All Campbell did was dare the Eagles to score more points, and they happily obliged.

Campbell gets his players to play hard, and there's value in that, but he's not exactly an analytics wizard.

As noted above, the Eagles missed a ton of tackles today. They gave up 35 points, and it could have been worse if not for some off-target throws by Jared Goff to open receivers.

The Lions also gashed the Eagles on the ground, and a lot of that damage appeared to be scheme-related, as opposed to players being physically beaten. This was not the defensive performance Eagles fans were looking for in hopes that the 2022 season will be different under Jonathan Gannon.

The Lions tried a surprise onsides kick in the third quarter, and McPhearson was ready for it. He calmly fielded the kick, and turtled up to protect the ball. That was a low-key huge play that could have been a disaster if McPhearson was asleep at the wheel. Kudos to him and special teams coordinator Michael Clay for being ready for that moment, which wasn't quite a clear onsides situation within the flow of the game.

9) The 'It Doesn't Get Easier' Award: The Vikings

The Eagles will face a Vikings offense led by Kirk Cousins, Justin Jefferson, Adam Thielen and Dalvin Cook in Week 2 that is a hell of a lot more talented than the Lions' offense that just scored 35 points.

Ultimately, a pretty win and whatever you'd call the Birds' win on Sunday will look the same in the standings. The bottom line is that they're 1-0. While the Lions have a long way to go before they'll be contenders, they're a young, scrappy bunch that played hard in front of a raucous crowd. From the Eagles' perspective, there's value in handling business on the road against a team that is in the early stages of building. A win like this is fine Week 1. It will be more concerning if it looks like this heading into the playoffs.