What they're saying: The Eagles are 'the best team in football' 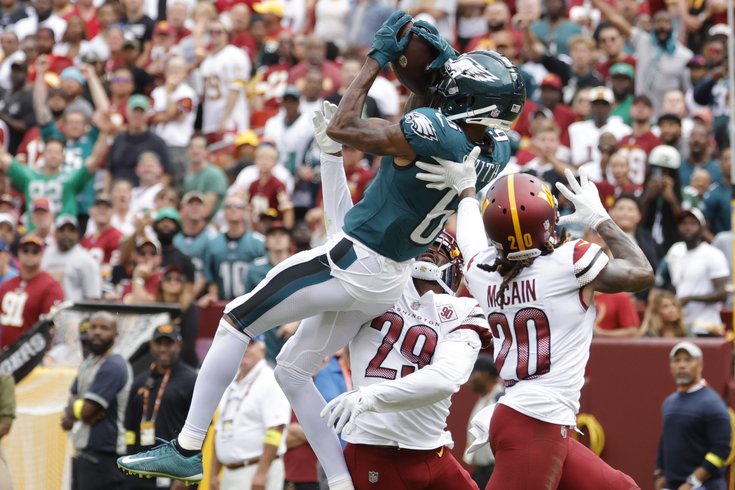 Eagles receiver DeVonta Smith makes a huge catch in double coverage to bring the ball down to Washington's 1-yard line late in the first half.

The Eagles are cruising at 3-0. Jalen Hurts is playing like an MVP. The team's wideouts have been dominant. Their defensive line is racking up sacks. They're enacting revenge on their former franchise quarterback.

Eagles fans are understandably amped, but the national media is taking notice of the Birds' hot start as well. Rounding up some news and tidbits, here's what they're saying about the Eagles after their big Week 3 road win against the Commanders...

Talk of the League 🗣️

On the "Football Night in America" Sunday Night Football pregame show, the pundits were all about the Eagles. Former Cowboys head coach and current NBC analyst Jason Garrett said, "I think Philadelphia is the best team in football right now." Garrett also gave props to a certain former All-Pro defensive tackle, saying, "I feel like I’ve spent my life trying to block Fletcher Cox. And he’s still doing it. It’s unbelievable how good this guy is.”

Former NFL quarterback Chris Simms, who infamously left Jalen Hurts off his top-40 QB list ahead of the 2021 season, said, "This guy is playing like one of the best quarterbacks in football. Beautiful down the field thrower, we know his ability to run. Along with that roster, Eagles are flying high right now.”

Maybe throw some hot sauce on that crow you need to eat, Chris.

Over at Sports Illustrated's Monday Morning Quarterback site, each writer handed out a game ball for Sunday's slate of performances. Philly area native Mitch Goldich gave his to the Eagles' pass rush, writing:

I don’t care if we cut one ball into panels or find a whole bag of them to give out, but I’m dishing mine to a group. Philly’s defense mauled Carson Wentz early and often in his first game against the team that drafted him No. 2 in 2016. The unit set the tone early with sacks on three consecutive snaps on the first two drives. At halftime, the Commanders had five first downs and the Eagles had six sacks. In all, Wentz was sacked a career-high nine times, fumbled twice and lost one. Brandon Graham led the way with 2.5; Fletcher Cox, Josh Sweat and Haason Reddick all had 1.5; and T.J. Edwards and Javon Hargrave each had one. At one point, the Eagles led in net passing yards 323 to minus-1. The Commanders were shut out through three quarters and never really in the game. [SI]

He's speaking the truth! It was the sixth time this century that the Eagles had recorded at least nine sacks in a game (via Stathead). They most recently accomplished it in Week 5 of the 2019 season, recording 10 sacks against the Jets in a 31-6 win.

Remember when people were concerned that DeVonta Smith didn't have any catches in Week 1? Well, he's responded swiftly and turned in the best day of his young career against the Commanders on Sunday, going for eight catches, 169 receiving yards and a touchdown. Here's how that performance stacks up against the game's best receivers in Week 3:

Over at the statistical-focused Fivethirtyeight website, they're updating their playoff and Super Bowl predictions as the 2022 season progresses. Fivethirtyeight is all over the Eagles.

They're projecting the Eagles to finish 13-4, the best record in the NFL. Their playoff odds are at 93 percent, the top mark in the league. The Birds have a 40 percent chance of securing a first-round bye, per Fivethirtyeight, and are tied for the second-best odds of winning the Super Bowl with the Buccaneers (both teams are behind the Bills).

Whether you're more of a vibes person or someone who's into empirical data, the Eagles' hype train is chugging along.