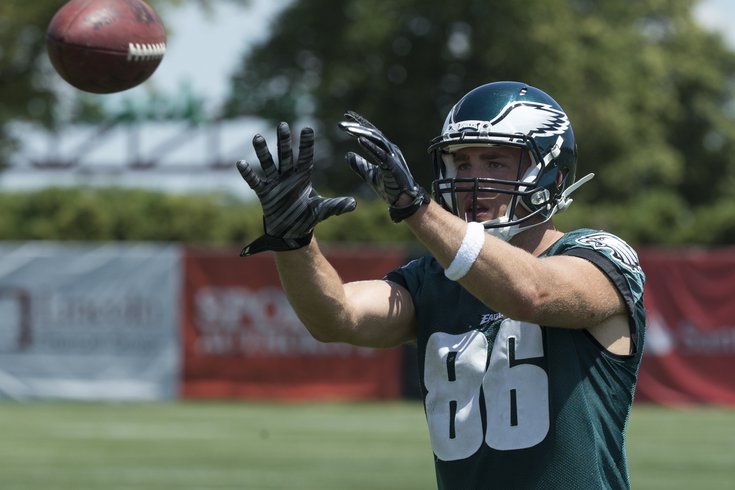 Zach Ertz is pushing hard for a starting job.

Today was the first of two Eagles practices at Lincoln Financial Field, which was attended for free by Eagles fans. (The second one will be August 9th). Here are my notes on the day:

• Zach Ertz had a really good day. On one play near the end of practice, he out-jumped Mychal Kendricks for a pass down the seam, and landed hard on the ground. Ertz was shaken up and was helped off the field. However, a couple plays later he was right back in there, got open, and made another catch. Ertz was very active as a receiver all day.

• In other Kendricks vs TE news, Kendricks forced a Brent Celek fumble and was able to recover it.

• Jordan Matthews didn't go berserk like he did on Monday, but he had another good day. His highlight was a diving sideline catch over Malcolm Jenkins.

• Here's a rapid-fire passing drill. Note that punter Donnie Jones is among the receivers who got a rep:

• Rookie undrafted free agent Denzel Rice had a big day. On one series, Tim Tebow took off running, and Rice punched the ball out for a fumble, then recovered it. On the next play he broke up a pass by Tebow. He also later had another pass breakup, which the Eagles' staff loves. Rice had 22 pass breakups the last two years at Coastal Carolina. If he were drafted, that would have tied him for 4th in PBUs among cornerbacks that were drafted this offseason.

• Tebow had a rough day. He killed some worms McNabb style, fumbled (as noted above), and threw an ugly ill-advised shovel pass near the sidelines that was picked off by Chris Prosinski.

• One rookie corner who has been beaten with regularity is sixth-round pick Randall Evans. Several receivers have been able to get open for catches against Evans, and at one point Evans had a blatant hold on a receiver who would have otherwise been open deep for a TD. Evans also had a chance to intercept a deflected pass, and although it would have been a nice catch, he was unable to make the play.

• JaCorey Shepherd bounced back with a nice day after struggling yesterday with Jordan Matthews. On one deep ball, he ran stride for stride with Nelson Agholor and helped prevent a completion. After the draft, former West Virginia QB Clint Trickett noted that Shepherd did not often let receivers beat him deep in college:

My non biased steal of the draft? JaCorey Shepherd CB @ Kansas. 2 years of film on him and not once did anyone complete a deep ball on him.

• Throughout OTAs and minicamp Cody Parkey has been money. However, today, on the first FG attempt in pads in front of Eagles fans at the Linc, he missed wide right from 42.

• Matt Tobin got reps with the ones at RG on Sunday, Monday it was Andrew Gardner, and today they went back to Tobin.

• At various points throughout practice the Eagles would have a camera on various players, displayed on the jumbotron with a graphic that showed their name, height, weight, etc. The camera people did this for poor Dennis Kelly at the worst possible moment. As soon as they showed Kelly on the screen, he got pancaked by a pass-rushing defensive linemen, and then the camera people continued to show him on the ground. It looked something like this: 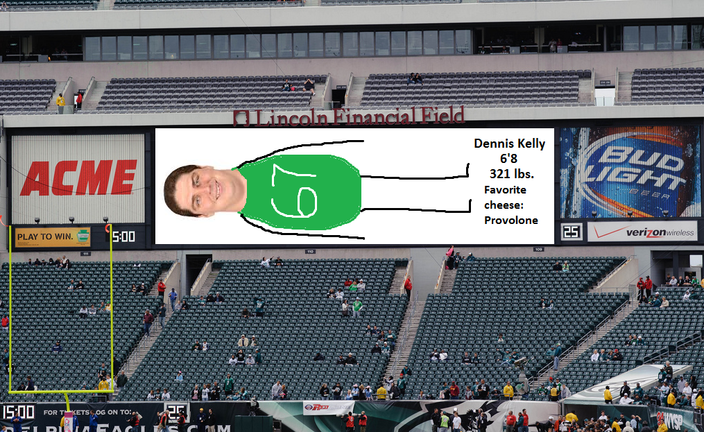