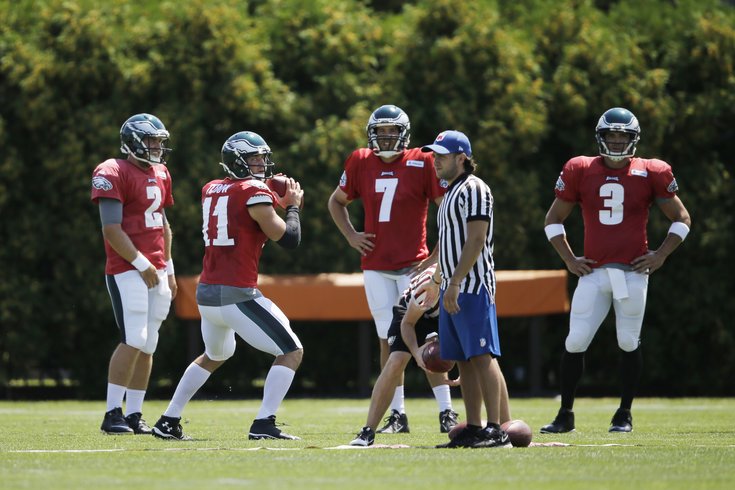 Today will be the last practice notes post that you will read from me and the other Eagles writers this offseason. Tomorrow will be a mere walk-through for the players, and then after the Ravens game on Saturday, NFL rules revert back to the regular season practice schedule, which will not be open to the media. So drink it in, friends.

• Marcus Smith was injured today. That will further test the Eagles' depth at outside linebacker.

• Vinny Curry got reps at OLB, like he has over the last week. As noted when we reported almost a week ago that he would see reps at OLB, the Eagles don't want him dropping into coverage, but when he does, his drops will be very simple. He dropped a few times today, and honestly, it didn't look awful.

As a pass rusher, Curry looks really big standing out there on the edge. Curry is about 280 pounds, and he was able to jolt the Ravens' RT back into the pocket with a running start from his OLB spot. He didn't even bother trying a pass rush move; he just ran/crashed into the RT and moved him against his will. Curry said he talks to Trent Cole every day. Obviously, Cole moved from 4-3 DE to 3-4 OLB. Curry has moved from 4-3 DE to two-gap 3-4 DE to 3-4 OLB. That's very impressive from an athleticism standpoint.

• My QB breakdown throughout camp, in ten words or less for each guy:

• DeMarco Murray practiced today. A few of us reporters debated whether he'll play on Saturday. I'm on #TeamWon'tPlay. He's been hampered by a hamstring strain, er, I mean dehydration/sickness/other. The Eagles know what DeMarco Murray is. They don't need to see him play in Week 2 of the preseason. I believe he'll play a little Week 3, and then be ready for Week 1 of the real games Atlanta.

• Cody Parkey rebounded today after a bad game on Sunday, and subsequent bad practice on Wednesday. He made all seven of his field goal attempts today: 32 G, 34 G, 42 G, 44 G, 35 G, 39 G, 45 G. However, Ravens kicker Justin Tucker stole the show, when he blasted a field goal attempt of about 70 yards through the uprights. On a related note, Tucker is the best kicker in the NFL.

• Eric Rowe also rebounded after a not-so-great showing yesterday in joint practices. He had a forced fumbled, and generally covered well all day.

• One of the surprises of camp so far has been CB E.J. Biggers. Today he had a pick six, although to be fair he intercepted Matt Schaub, who throws more touchdown passes to opposing defenses than to his own team.

"Bigs has done a really nice job," said Chip Kelly. "He's got versatility, he's played safety before, he's played nickel before, he's played outside corner. But he's a guy I think has really shown up on a consistent basis for us and he's someone who has some experience. He's another guy that doesn't get rattled back there. He's seen it, been through it, been in NFL games. I've been really happy with what Bigs has done so far."

If you get a nickname from Chip, that bodes well for your chances of making the 53-man roster. And Chip called him "Bigs" TWICE! Huge for Bigs.

In other "nickname insight" news, Kelly referred to Jerome Couplin as "Cup."

• Josh Huff made a Ravens defender look silly on a kick return. Huff faked like he was going to run to the outside, but he stuck his foot in the dirt and had a nasty cut inside. The Ravens defender was frozen, and Huff ran right by him. I think Darren Sproles will once again be the Eagles' punt returner, and I'd lean toward Huff as the primary kick returner.

• It's a shame you can only keep 53 players, because one guy who has really stood out at times is RB Raheem Mostert. On one running play, Mostert broke contain and sped around the edge for a nice gain. He has also looked fast and decisive as a kick returner. Ultimately though, if the Eagles keep four running backs, I think they'll keep Kenjon Barner, who has also looked good, and has more experience. Pencil in Mostert for the practice squad.

• Former Rutgers WR Quron Pratt has quietly had a nice camp. He made the practice squad a year ago, and may earn a spot there again in 2015.

• There was a fight today. Sort of. I missed it, for full disclosure, and by the time it had my attention it was over. Recently signed OLB Diaheem Watkins was involved. (Shrug). This has been the least fighty camp I've ever seen.

Well, except for that incident with that moron on the radio.