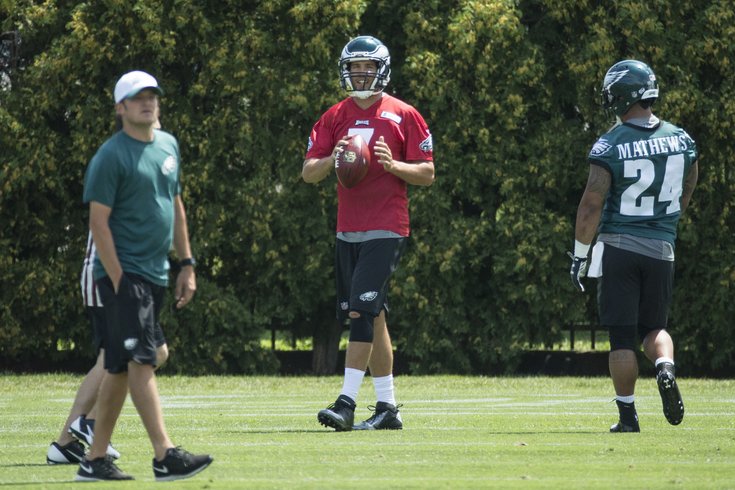 Eagles football is back, as the Birds kicked off their third training camp under Chip Kelly today. The action, however, was kinda slow. The vibe was very mellow for a "first day of camp," and the practice itself was exceedingly short. Still, as always, my practice observations:

• Sam Bradford had a rough first day. He threw a bad gift interception to Nolan Carroll, and later had poor ball placement on another pass that was almost picked once again by Carroll. The lowlight of the day, however came on a play in which Bradford dropped the shotgun snap, then tried to roll out of the pocket (not sure he made it outside the tackle box), and lofted what was either a terrible throwaway or just a completely ill-advised sideline throw to a well-covered tight end. It was really just an ugly play from start to finish. Let's call it rust for now. He needs reps. A lot of them.

• Knee brace update: Bradford has eschewed the bulky knee brace he wore during OTAs for a more spandexy tight-fitting version. 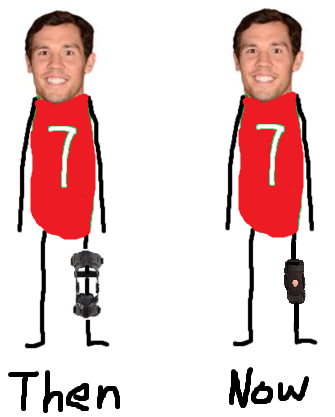 • Matt Barkley threw a perfectly placed ball into a small window on what appeared to be a post route by TE Justin Tukes. However, I should note that if that play were during a regular season game, Tukes would have been lit up like a Christmas tree by the safety. Great throw, in terms of touch and accuracy, but somehow also emblematic of what Barkley is at the NFL level.

• Tim Tebow had a chance to connect with an open receiver on a deep ball, but he underthrew it, giving Jordan Hicks a chance to recover and bat the ball away. Barkley and Tebow split reps today.

• I remember back in the heyday of Barry Bonds, when he was in the outfield and an opposing player hit a no-doubt-about- bomb over Bonds' head, he wouldn't even bother taking his hands off his knees or watch the ball clear the fence. Well, undrafted free agent center Mike Coccia had such a bad shotgun snap today that Barkley didn't even bother chasing after it, a la Bonds. It wasn't even worth playing out the practice rep. Instead, the offense just went onto the next play as quickly as possible.

In my view, the only spot that is up for grabs along the line is RG, and wouldn't be surprised if someone else gets first-team reps there tomorrow.

• Josh Huff looks spry. He had a nice leaping catch, and then turned it upfield. A year ago, Huff came close to a number of circus catches, but never actually brought any in.

• Jordan Matthews had a nice one-handed stab on an out route. I'm of the opinion that Matthews is primed for a big year.

• One of the unknowns who had a good day was undrafted free agent Rasheed Bailey of Delaware Valley University. He made a number of catches today, and stood out among the third and fourth teamers.

• Miles Austin brought in a deep pass along the sideline. Eric Rowe was there on the coverage, but Mark Sanchez and Austin executed nicely on the back shoulder throw. Sanchez is very good working the middle of the field, but has struggled working the sidelines. On this occasion, he threw a really nice sideline ball down the field.

• The Eagles' uniform font is terrible. It's almost impossible to tell the difference between any numbers that include a 6, an 8, or a 0. "It's not a championship font," said Tim McManus of Birds 24/7 during practice. Agree.