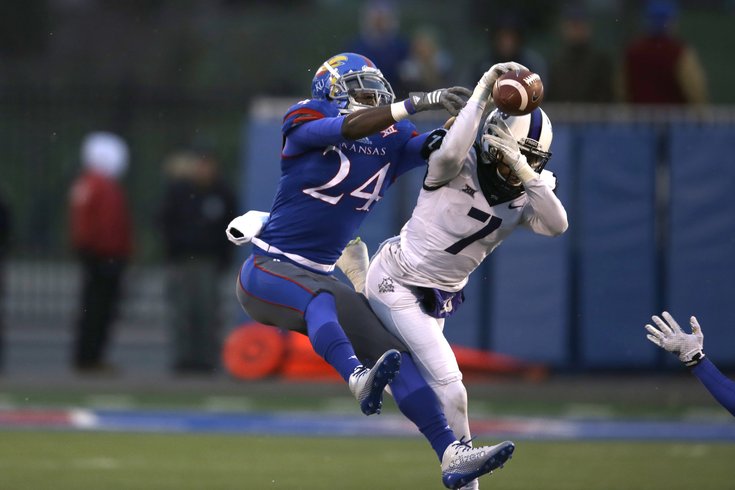 The Eagles are very high on JaCorey Shepherd.

With Brandon Boykin being shipped to Pittsburgh, there was some uncertainty as to who might fill Boykin's role as the Eagles' slot corner. The first man to get a crack at it with the first team defense at training camp? Rookie sixth-round pick JaCorey Shepherd.

Shepherd didn't play nickel in college, however, way back in early June during Eagles OTAs, we noted that Shepherd was shadowing Boykin, particularly during the Eagles' "teach" sessions so that he could learn the defense as a slot corner.

Have you ever been to a restaurant where the waiter/waitress has a new employee following them around to learn the ropes? When they greet your table, they're like, "OMG hieeee, welcome to Applebees! My name is Jenny, and I'll be your server today. This is Kristi. She's new here, and she'll be following me around. Would you like to start of with some sliders, potato skins, or maybe one of our ultimate margaritas?" Well, that's basically what JaCorey Shepherd and Brandon Boykin were like at practice today, as Shepherd shadowed Boykin at times to learn the defense.

It appears that Boykin was essentially training his replacement. "That was my first time going into the nickel position, so they had me mirroring (Boykin) during our teach period so when I (played in team drills) I knew what I was doing.

"I was kind of looking forward to him taking me under his wing, showing me the ropes, and routes, as far as playing nickel corner in the league."

This morning we noted that he is a lock to make the roster. Why? According to several people I've spoken with over the summer, the Eagles are very high on Shepherd. Chip Kelly echoed that sentiment, as he had effusive praise for Shepherd during his initial training camp press conference.

"He's explosive," said Kelly. "He's got great ball skills, He's real quick in and out of cuts. He seems like he's got a real knack for being around the ball. That showed up a lot when you turned the tape on. We were surprised that he was still around in the sixth round."

Kelly is exactly right that Shepherd was around the ball a lot. In fact, over the last two seasons, Shepherd had more pass breakups than any other corner that was selected in the 2015 NFL Draft.

*PBU stats for Tray Walker and Tye Smith could not be located.

So if Shepherd is so good, and potentially ready to take on an immediate role in the Eagles defense, why was he available in the sixth round of the draft?

"I think he slipped probably a little bit in the draft because he was hurt by a hamstring, kind of a lingering thing," explained Kelly. "He didn't work out as well as people expected in the offseason, in all the testing times. He didn't run a great time. But when you turn the tape on, he's a legitimate football player. What we saw on tape is what we saw during OTAs and minicamp and the offseason program, so we're excited about his development and his growth."

Shepherd ran a 4.65 and a 4.68 during his Pro Day, which are unacceptable numbers for a cornerback at his size in the NFL.

"I knew that that's not my (40 time)," said Shepherd. "I ran with a torn hamstring. Nobody knew that. I tore it two days before. I knew it was torn but I knew that I didn't have a risk to hurt myself more, so (I just ran). I thought it would help me out, but obviously it didn't."

Eagles vets, such as safety Malcolm Jenkins, are already impressed as well. "Shepherd, last night, figured out that he would be with the ones as a nickel today, and he stepped in today and didn't miss a beat."

As for Boykin's take, Shepherd said he had a chance to talk with him after the trade. "He told me this is my opportunity, it's for me to lose."