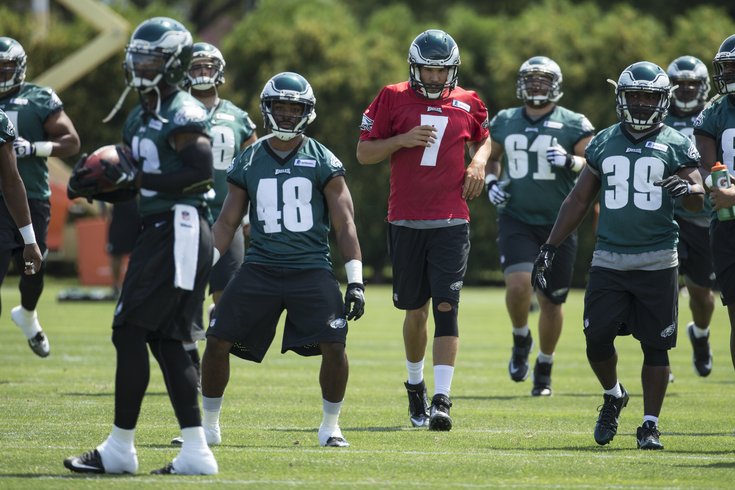 Sam Bradford on the practice field during the first day of Eagles training camp.

In June, quarterback Sam Bradford told reporters that unless "something has gone terribly wrong" he would be ready to go in 11-on-11 drills when Eagles training camp began.

Well, Sunday was the first day of camp, and head coach Chip Kelly gave fans some good news before the players even took the field.

"[Bradford's] full go, 100 percent," Kelly said. "When you talk to him, he had a great offseason, from when we left on June 18 to now. He feels really confident."

After practice, the former Rams quarterback and No. 1 overall pick said "everything felt good" as he played without restriction for the first time since tearing tearing his ACL for the first time during last preseason. And as for that confidence Kelly mentioned, that was there too.

"No [restrictions]," he told the throng of reporters crowded around him. "I'm good to go."

"You guys might even see me pull one and run it up the middle," he added with a chuckle.

So with no offseason setbacks, and a twice-surgically repaired knee that seems to be healing as expected, Bradford was all smiles as he opened training camp for the first time as an Eagle.

"Today was a big step," he said. "Like I said, it's been almost a year since I've been on the field, full speed, playing football. So to just get out there and play ball and know that my knee can do it, it was a really first step and first day, today."

Bradford, who was traded to the Eagles for Nick Foles and draft pick prior to the draft, is coming off back-to-back ACL tears in the same knee. But last month during a roundtable discussion with reporters, Kelly said he wasn't worried about that, and compared the move to what the Saints did with Drew Brees, or the Broncos with Peyton Manning.

And on Sunday, the Eagles coach seemed quite pleased his new QB won't have to hold anything back going forward, adding that the newly-acquired quarterback is on track to start the team's first preseason game against the Colts on August 16.

"We'll see," Kelly said when asked whether or not Bradford would need days off here and there. "He passed the conditioning test yesterday. We don't have any restrictions in talking to the trainers and doctors on him now, but that doesn't mean two days if it flares up, we'll have to handle up.

"But right now, we're not anticipating he's going to practice today and tomorrow we're going to take him off. Right now, he's going to go and we'll see how his knee responds. But he feels really confident. He's right on track to where he wanted to be."

And his quarterback was in agreement.

"I think that's something we'll take on a day-to-day, like we did in the spring," Bradford said. "Obviously, the goal is to come out and not have any limitations. Coming off back-to-back injuries, I think you've got to be smart. So if it does start to flair up or it does start to get sore, then maybe we'll start to manage it.

"But the hope and goal is not to have to do any of that."

The former Heisman winner also noticeably shed the cumbersome brace -- he said it "got in the way sometimes" -- that he was wearing during OTAs in favor of a much smaller sleeve*, but only after getting his doctors to approve.

*That's the sleeve in the photo at the top of the story.

Sam Bradford ran on to the field at #EaglesCamp like... pic.twitter.com/7CuvMrUS0t