If Sam Bradford isn't ready for camp, 'something has gone terribly wrong' 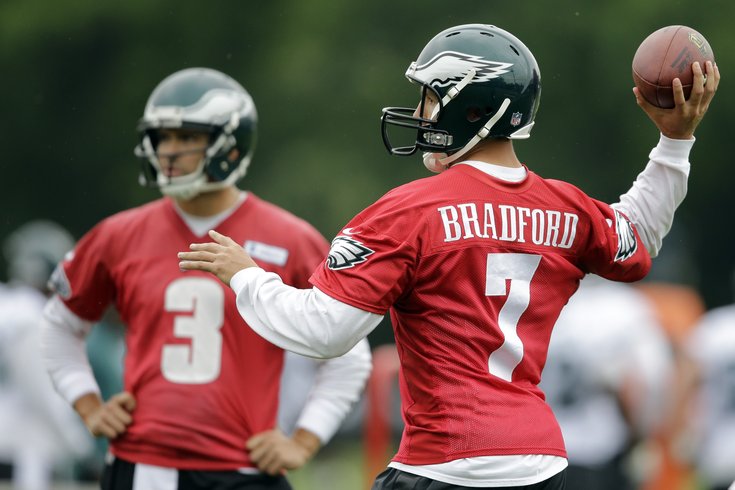 How are you progressing? How does your knee feel? Do you feel better than last year? Worse? The same?

Nearly every question lobbed at Eagles quarterback Sam Bradford following the first day of minicamp practice Tuesday was some version of that. However, you didn't need to be listening to the 27-year-old quarterback to get the answers.

Those could be found right where Bob Dylan said they could, floating in the wind. Or in this case, slicing through the air at the NovaCare Complex.

It's hard to question the confidence with which Bradford responded to reporters, not when his passes look so crisp* during seven-on-sevens. He may be coming off back-to-back ACL tears, but aside from the brace around his left leg, there's little evidence he's playing on a (twice) surgically repaired knee.

Prior to practice, head coach Chip Kelly met with reporters and -- after approximately one million Evan Mathis questions -- was asked about whether or not Bradford would be ready for 11-on-11s when training camp opens on August 2.

Following practice, Bradford was told of Kelly's remarks and echoed his coaches sentiment.

"If I'm not ready for 11-on-11 by training camp, then I think something has gone terribly wrong," Bradford said. "We're going to continue to work each week, continue to grind throughout the summer, and try to be ready for training camp."

“I think when you come back from a knee, you’re obviously a little hesitant to torque into it, but I think over the past couple of weeks I’ve made a lot of progress and really feel comfortable driving into that left knee now.”

But it's not just the big-picture changes that Bradford has noticed, saying his knee feels even better than it did a week ago.

"You can notice [the difference from week to week]," he told reporters. "I'm sure if you've had any type of injury, you know. It's less stiff. It's less sore. It feels more like normal. You're able to come out here and not think about it. And I really feel like that's the stage that I'm getting to, where I don't even think about it anymore."

That's all part of the natural healing process of any injury. It's also the time when the risk for re-injury is at its greatest. It's the time when a player is most likely to push himself too far because he feels healed, even if the injury hasn't completely done so yet.

Considering this is his second time going through the recovery process, it's a safe bet that he won't rush things this time around either. In fact, Bradford said he plans to keep a similar summer schedule to last year's, adding that he plans to stick around NovaCare to continue working out.

"I'm going to be around here most of the time," he said when asked about his plans between now and the start of training camp. "We sat down a little bit last week with the strength staff and the training staff and kind of put together a plan. I think it's five and a half or six weeks from the time we leave here Thursday 'til when we get back.

"So, I plan on sticking around here and continuing to work."

On the importance of communicating with the younger guys:

“I think that’s extremely important. Since I can’t get the reps right now, I think it’s important to build those relationships and just talk to those guys. ‘Hey, what’d you see there? Why’d you do that? If you could do it again, what would you do?’ I think it’s been good dialogue between those guys and myself.”

On his familiarity with the offense:

“I’m pretty comfortable. Obviously, the more I’m out there, the more comfortable I’ll get. Once training camp comes around and I’m able to be out there, hopefully, for everything and take every snap, I think things will really come together. But for the most part I feel really good with where I’m at right now.”

On what’s most important in an uptempo offense like this:

On the learning curve with a new offense:

On whether or not he needs to visit Dr. James Andrews again:

On how recovery time varies from athlete to athlete:

“I think each injury is different. It’s not one of those things that you just go by the book. Each injury, each recovery process is different. That’s what Dr. Andrews told me the second time I went down there for surgery. He said, ‘Hey, you’ve gone through it once, but I’m going to tell you right now, it’s not going to be the same the second time.’ That’s one of the reasons things are different, you know, across the league.”