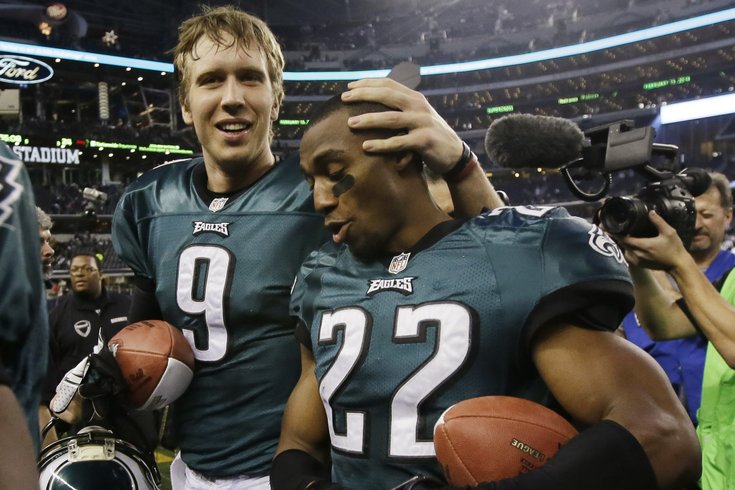 "It's OK little buddy. They traded me too."

The Eagles announced Saturday night that they traded away Brandon Boykin to the Steelers. In return, they'll receive "a conditional fifth round pick." Adam Caplan of ESPN is reporting that the fifth round pick can become a fourth round pick based on playing time.

The 5th round pick the #Eagles will receive can be as high as a 4th round pick depending on playing time for Boykin this season, per source.

In 2013, Boykin had an incredible season from his slot corner position when he intercepted six passes, which was second in the NFL behind only Richard Sherman of the Seahawks. One of those six picks came late in the fourth quarter Week 17 against the Cowboys, a play that sealed the NFC East division crown for the Eagles.

However, the team clearly never valued Boykin as much as the media or the fan base, partly due to his short stature. The Eagles added seven new defensive backs this offseason, six of whom are projected to play cornerback for the Eagles.

Boykin has been a logical trade chip for the better part of this offseason, as he was a good bet not to return to the team in 2016. He is currently in the final year of his rookie deal, and he wanted to play a bigger role on the field. In that respect, the trade compensation the Eagles received in return wasn't bad. On the other hand, it's worth questioning whether the Eagles under-valued him in the first place.

Here's an updated view of the Eagles' draft picks in 2016:

Boykin is now the 10th old Andy Reid player to have moved on from the Eagles this offseason:

There will almost certainly be more casualties. We'll have more soon on who will take on Boykin's role in the slot.