The Eagles will probably be timeout wasters once again 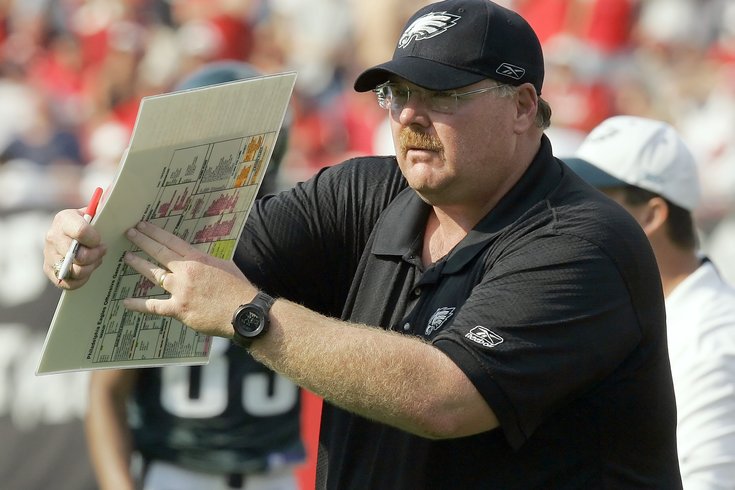 Philadelphia Eagles fans certainly won't miss Chip Kelly offensive series that were three plays in duration and were over by the time you got back from your trip to the bathroom on a commercial break. That said, one thing the Eagles almost never did offensively under Kelly was waste timeouts because the play clock was running down.

Wasted timeouts were a common occurrence from 1999-2012, when one Mr. Andrew Walter Reid was the head coach in Philly, and they're probably coming back.

In the last three years in Kansas City, Andy Reid (mostly) would call the plays, and they employed a two-step process getting the play call to the huddle. Reid would give the play to former Chiefs offensive coordinator Doug Pederson, who would then make the call to quarterback Alex Smith on the field. Unquestionably, the "whispering down the lane" approach cost the Chiefs at least a few extra second pre-snap on every down.

Out of curiosity, we took a look at all 18 of the Chiefs games last season (16 regular season games, two in the playoffs), and determined that they wasted 16 timeouts on offense. While this exercise was subjective, the vast majority of them were situations in which the play clock was running out and the Chiefs were forced to burn a timeout. For the purpose of showing our work, the wasted timeouts broke down like so:

The HC-to-OC-to-QB approach to play calling will be following Pederson from Kansas City to Philly. Pederson will make the play call to offensive coordinator Frank Reich, who will then make the call into the quarterback on the field.

Pederson disagreed that the process is cumbersome.

"The time spent, me and Andy together, the time spent together during the week, we began to think alike," said Pederson. "You study so much tape preparing for that situation. Everything is categorized anyway in the game plan. You have your first and second down package. You have your entire third down, red zone, so your eyes focused on certain areas of the game plan. By the time you get to Sunday, you pretty much have memorized the game plan. It becomes fast, it becomes efficient. We do put a lot on our quarterback. This is how I learned the system – give them the personnel and play, and then the formation to it. So it also cuts down time.”

A lot of teams waste timeouts, even some really good ones, as Merrill Reese (!) pointed out on Twitter:

@JimmyKempski Jimmy...it would be interesting to find out how many time outs were wasted by the champion Broncos.

Still, ideally, Pederson could just communicate the call directly to the quarterback, but he explained the necessity behind it.

Reich will not have the power to change the call, just as Pederson was not allowed to change any calls with the Chiefs. When asked if he ever changed a Reid call, Pederson laughed. “Heck no … heck no. Now, I’ll be quite honest, though: There were times where we might have the same play in two different ways, and I hear the play, and I’ve called it the second one instead of the first way. Just by hearing something, [snap], you call it, and, dammit, it’s not the formation we wanted. That’s happened. But never changing a play.”

It's mildly interesting -- although certainly understandable -- that Pederson wants to be in on what the defense is doing, and he is choosing the defensive channel over the quarterback channel. Pederson explained why.

"Because you get in situations where you’re going to want to, over the course of the game, you’re going to be on the defensive side," Pederson explained. "You’re strategizing, you’re doing all that kind of stuff, and you want to make sure.”

To be clear, Jim Schwartz will run the defense and make all the calls.

“I oversee the entire team, but structurally, what he puts in on defense, I’m not going to change," said Pederson. "Yes, I’m over all of it, but at the same time I’m not going to go say, `Jim, I think you need to blitz more or blitz less."

Pederson will be able to hear what the defense is doing, but the benefit of that will probably come at the cost of the Eagles wasting some timeouts on offense, just like in the good ol' days. Pederson will need to do a better job there.