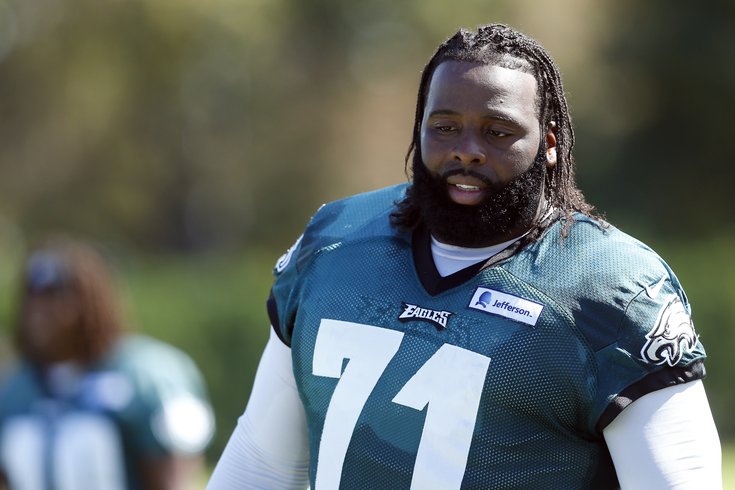 The Eagles remain banged-up, and there's a new big-time name for Philly who will be questionable in Landover, Maryland this Sunday. Here's a look at the Eagles' and Redskins' injuries, with analysis.

• ILB Kiko Alonso (knee): As we noted earlier in the week, Alonso will be out for about a month. The Eagles have gotten fantastic play out of rookie ILB Jordan Hicks in Alonso's absence.

• DE Cedric Thornton (hand): Thornton has a broken bone in his hand, and will be out. He is a quality starter and very good run stuffer. The Redskins want to pound the run early and often.

• DE Taylor Hart (shoulder): In Hart's absence last week, Brandon Bair balled out, so there shouldn't be any rush to get Hart back out on the field.

• OT Jason Peters (quad): The Eagles are in huge trouble along their OL if Peters gets hurt at any point this season.

• RB DeMarco Murray (hamstring): Ryan Mathews played well in relief of Murray last week, but at some point the Eagles are going to have to get Murray going in the run game.

• S Chris Maragos (quad): Maragos has been the Eagles' "nickel safety," as he has entered the game in the Eagles' nickel package, taking over for Malcolm Jenkins, who becomes the nickel corner. The Eagles have put Maragos in a position not to fail by often parking him far off the line of scrimmage in nickel sets. With Maragos out, the Eagles left Jenkins at safety, and brought in E.J. Biggers in a nickel role, with Eric Rowe entering the game as the dime.

• WR Josh Huff (hamstring): Huff was a surprise addition to the injury report last week, but could not play.  While the Eagles have depth at WR, Huff's ability to make plays after he has the ball in his hands is something the Eagles should have tried to utilize more in the short passing game against the Cowboys with the Sam Bradford struggling to get the ball down the field accurately.

• OLB Travis Long (ACL): Long was OLB depth, and was lost for the season after tearing his ACL.

• CB JaCorey Shepherd (ACL): Shepherd was poised to have a significant role his rookie season as an option at slot corner before he tore his ACL.

• C David Molk (biceps): The Eagles are already thin at OL depth, and Molk is an experienced backup in Chip Kelly's offense.

• CB DeAngelo Hall (toe): The 31-year old Hall (it feels like the 12-year vet should be older) was ruled out by the Redskins earlier this week. They'll be thin at CB.

• Chris Culliver (knee): Culliver did not practice either Thursday or Friday after being limited on Wednesday. That does not bode well for his chances of playing on Sunday. With DeAngelo Hall already out and Duke Ihenacho on IR, the Redskins could be down three starters in their secondary.

• Kedric Golston (hand): The Redskins have plenty of depth along their defensive line, so it shouldn't kill them if Golston can't go.

• OLB Junior Gallette (ACL): Galette was a controversial signing by the Redskins, but there's little question about how good of a player he is. Galatte ruptured his Achilles and is done for the season. Galette was reportedly having a very good camp, and ESPN Redskins reporter John Keim classified the injury as "devastating."

• S Duke Ihenacho (wrist): Ihenacho was one of the Redskins' starters at safety before he was lost for the season with a broken wrist. As noted already, the Redskins will be very thin in their secondary.

• TE Niles Paul (ACL): Paul fractured and dislocated his ankle, and is done for the season. He was always a valuable, versatile reserve player for the Redskins, but was slated to win the starting TE job this season. The Skins also lost backup TE Logan Paulsen for the season with a toe injury.

• CB Justin Rogers (plantar fasciitis): Rogers played a little Week 1 against the Dolphins when Bashaud Breeland was out. Rogers isn't an irreplaceable player by any stretch, but his loss for the season further depletes the Redskins' depth at CB.