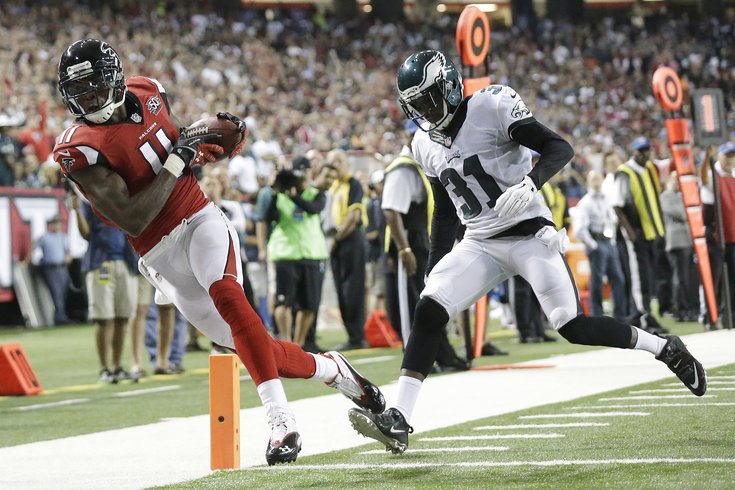 The Eagles felt that Byron Maxwell was the best cornerback on the market during free agency this past offseason, which was why they signed him to a $63 million deal. Clearly, their expectations were high.

They were so high in fact that the Eagles planned on using Maxwell in a variety of roles that are typically reserved for the best lockdown corners in the league. In 2014, the Eagles were impressed with the way Maxwell moved into the slot from the outside to cover Jordan Matthews when the Eagles faced Maxwell's old team, the Seahawks. Maxwell responded by limiting Matthews to two catches for 23 yards on five targets.

The Eagles also envisioned Maxwell taking on a role in which he shadowed the opposing teams' best receivers whenever it was a matchup they felt suited Maxwell's skill set. It was a role that Maxwell welcomed.

And then Week 1 happened. Falcons wide receiver Julio Jones torched the Eagles for nine catches on 141 yards and two touchdowns, much of which came against Maxwell's coverage. That led defensive coordinator Bill Davis to reassess how Maxwell was being used.

"I really had an expanded role (for Maxwell), I had him doing a lot of different things," said Davis. "And I think by limiting that and letting him settle into the defense first before he moved too fast forward, is benefiting him. And again, it's a learning process -- all free agents, I don't care how long they have been in the league, there's a learning curve from the coaches learning the player and the player learning the system, and I think we are going in a great direction with Max on that."

Maxwell agreed that he's not where he wants to be yet mentally. "I don't completely know the defense, the ins and outs," said Maxwell. "Like if he asked me to play safety right now I wouldn't be able to play safety. I would like to know everybody's position, and I don't necessarily know that yet."

If you didn't notice, and in this case not being noticed would be a step forward after Week 1, Maxwell has been much better as the season has progressed.

"Every week he's gotten better," said Davis. "The first week, I think the expectations are so high when you sign a contract like that. I think right now, he's feeling comfortable in our system. I'm learning him, we are learning him, and we are using him in the best way, and I think every week, you'll see him climb and climb and be better and better."

Clearly Maxwell has not yet lived up to the contract he signed in free agency. While that is disappointing to some degree, it may not matter. The Eagles have gotten good play from CB Nolan Carroll on the other side of the field, and there's an argument to be made that Malcolm Jenkins and Walter Thurmond have been the best performing safety duo in the NFL so far this season. It turns out that the Eagles don't need Maxwell to be Darrelle Revis. Giving him an expanded role was surprisingly unnecessary.