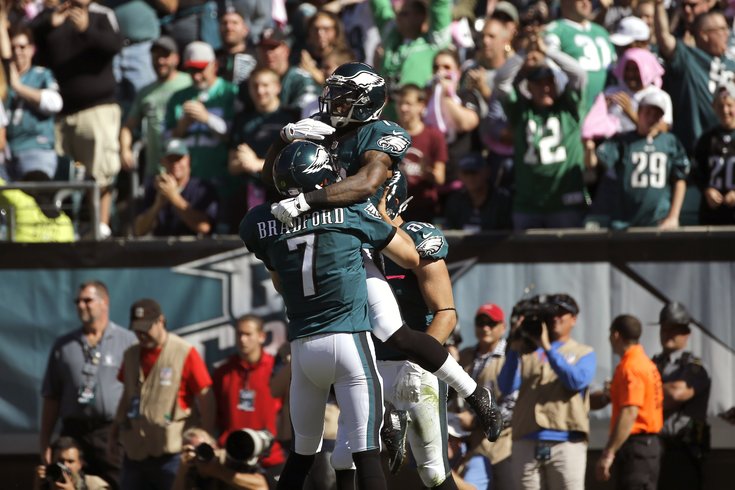 Sam Bradford and Josh Huff celebrate during their Week 5 win over the Saints.

Eagles defensive end Connor Barwin recently said that the team’s win over the Saints on Sunday will be "meaningless" unless the Birds also beat the Giants on Monday Night Football.

But that doesn’t mean the 39-17 win over New Orleans wasn’t important in its own right; had the Birds not picked up their second win of the season, the Week 6 matchup against Eli Manning and Co. would have been rendered almost equally as meaningless.

According to FootballOutsiders.com, the Eagles’ odds of making the playoffs jumped 9.4 percent in Week 5 to 33.1 percent. That’s second in the NFC East behind only the Giants (3-2) — they’re up 11.2 percent to 63.8 percent — and is the seventh-best in the conference. Here are the other six teams ahead of them:

As you can see, if the season plays out as FootballOutsiders.com’s projects — although things rarely play out according to numbers alone — the Eagles would be the first team out of the postseason. Part of the reason they are so far behind the Giants has to do with their 0-2 record in the division and 1-3 conference record. Luckily, the Giants aren’t much better. They're 1-1 in the division and 2-2 in the conference. That means a win over New York on Monday would put the Eagles into a tie with the Giants atop the NFC East.

Needless to say, that would greatly increase their playoff odds. However, with the team just halfway through their division schedule, which includes a regular-season finale at MetLife Stadium, there’s still a long way to go.

And, of course, numbers — or in this case 25,000 computer simulations — don’t tell the whole story. That’s where we in the media come in.

Across the board, the Eagles drew favorable reviews for their win over New Orleans — 515 yards of offense will do that, no matter the opponent — and that was reflected in this week’s power rankings.

First, here’s what our own Jimmy Kempski had to say about the Birds in his weekly NFC hierarchy/obituary:

The Saints defense has all the makings of being historically bad this season. The Eagles' Week 6 showdown against the Giants will show us if the offense is legitimately getting back on track, or if it was just a one-week aberration.

Elsewhere, the Eagles also saw their stock rise. According to my completely unscientific sample of 10 different power rankings, they climbed an average of 4.3 spots and have an average rank of 17.1.

That’s not a huge jump considering how impressive they looked in the win. Those tempered expectations are likely due to how unimpressive the Saints have been all season. But not everyone is discounting the victory; the Eagles did climb seven spots in ESPN's rankings, for example.

And while they're still behind the Giants, as well as the Cowboys and Redskins in some, a win over New York on Monday night will go a long way towards making them the NFC East’s most dangerous team, at least in the eyes of those who create these power rankings.

Here’s a look at the 10 writers/outlets I used for this, and what each had to say about the Eagles:

The Eagles have a point differential of +14, which ranks 12th overall in the NFL. It's the best of any team with a losing record. Philadelphia's defense looks strong, so if the offense can continue to play well the Eagles can be a good team.

Hanging 30 points on the Saints’ defense these days is about as difficult as pouring sprinkles onto an ice cream cone, but Philadelphia should be encouraged by its progress nonetheless. And it came just it time—Monday night’s game against the Giants could shape the entire NFC East race from here on out.

DeMarco Murray gained 83 rushing yards in Week 5, 36 more than he had in his first three games combined. The Eagles are 2-0 this season when rushing for at least 100 yards as a team.

The Eagles finally found their groove on offense in Week 5, to the tune of 519 total yards and 34 first downs, but give credit to the defense. Led by Fletcher Cox with three sacks and two forced fumbles, the Eagles made it impossible for Drew Brees to finish drives. It is the defense that will lead the way in 2015.

Sam Bradford seems to need time and patience in abundance. Or maybe the Philadelphia Eagles quarterback is still lost within Chip Kelly's offense, and that's reflected in his inconsistent play.

I'm not moving Philly up over Washington, not after the Eagles lost there in Week 4. Yes, we are getting to the point where head-to-head matchups don't mean everything in these Power Rankings. But we need to see another week of solid play from this Eagles defense and DeMarco Murray to trust either. Murray still looks more effective running when not in that shotgun, though. How about six tackles, three sacks and two forced fumbles from Fletcher Cox? This dude is so underrated.

Just imagine if DeMarco Murray (27 touches Sunday) was getting this kind of load all along. #FeedYourWorkhorseChip

They got the offense cranked up against the Saints. But they have to string a few games together before people start to believe again.

Giants at Eagles next Monday night is one of the more interesting matchups of the first half of the season. We'll have a much better read what direction the Eagles' season is headed after that.