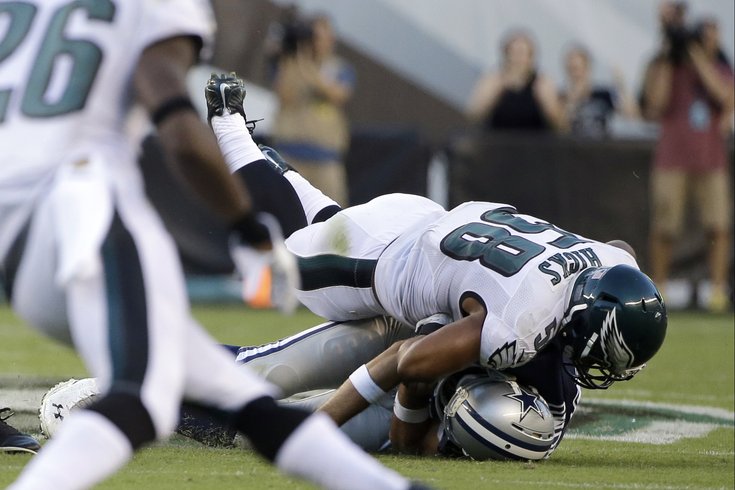 Jordan Hicks has been a rookie phenom.

As we noted when we graded the Eagles defensive linemen yesterday, we started grading all the position groups at the quarter point in the season last week. However, I bit off a little more than I could chew, and only got through the offense. So this week, we'll grade the positional groups on the defense, as we continue on with the linebackers.

The Eagles came into this season loaded at inside linebacker, and had committed in some way to each of their top four players there.

Many thought that having so many bodies at ILB was overkill. As it turns out, both Alonso and Kendricks have been on the shelf for most of the season, and Ryans and Hicks have had to step up and be three-down starters in the middle.

Hicks has been a rookie phenom. We did a film breakdown of his play Week 2 against the Cowboys, and he hasn't slowed down since. Hicks' numbers in roughly 3.5 games this season: 27 tackles, a sack, a forced fumble, an INT, three fumble recoveries, and two pass breakups. Oh, and he knocked out Tony Romo for half the season. Hicks and Kendricks are going to form an incredibly athletic, talented tandem in the middle of the Eagles defense for the foreseeable future.

Ryans, meanwhile, has been up and down. He made a number of huge stops on a goal line stand against Dallas, but has struggled running with receivers in coverage. That's kind of his game now. He's excellent against the run, but you don't want him covering guys in space. Ryans also does a lot of little things. For example, Fletcher Cox probably doesn't get this sack if Ryans doesn't push the RG back into the pocket so Drew Brees has nowhere to step up to throw:

There isn't much to evaluate of Alonso and Kendricks, who haven't played much this season. Alonso of course had that amazing one-handed interception against the Falcons, although he had a crucial defensive holding call in that same game. Kendricks, meanwhile, despite not playing much, has 17 tackles on the season.

A year ago, Connor Barwin had 14.5 sacks, which was good for fourth in the NFL. Brandon Graham had 5.5 sacks and four forced fumbles in a limited role backing up Trent Cole. So far this season, the two have combined for just three sacks, but I don't have much of a problem with the way they've played.

The last three games, the Eagles have faced a trio of quarterbacks in Ryan Fitzpatrick, Kirk Cousins, and Drew Brees who are far more likely to get the ball out when facing pressure than they are to just eat the sack. (We did a study on that a couple weeks ago). That has affected the way the Eagles tried to rush the passer in those games. It's probably fair to say it also likely hurt Barwin and Graham's numbers.

Otherwise, both have been very good against the run, and it is really impressive how far Graham has come in coverage in a matter of just two-plus years since he moved from a 4-3 DE to 3-4 OLB. As the season progresses, I would imagine you'll see an uptick in the pass rush numbers of Barwin, Graham, and Vinny Curry.

Oh, and hey, we had a Marcus Smith sighting last week!