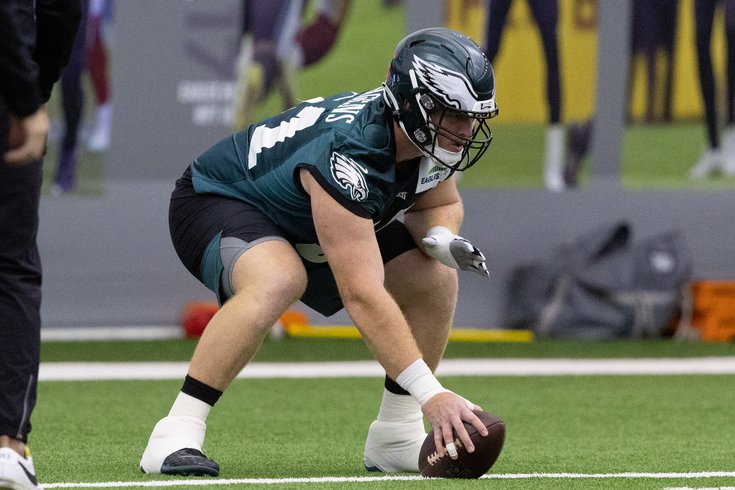 As we do every offseason, we'll be comparing each of the Philadelphia Eagles' rookies to current or former NFL players. Today we'll find a comp for second-round center Cam Jurgens.

First, who did Jurgens say he patterned his game after?

Jurgens is an undersized center at 6'3, 303, but with outstanding athleticism. At the Combine he ran a 4.92 40 (97th percentile among centers), with a 1.71 split (94th percentile). He's a weapon in the screen game, as he can get down the field, much like we've seen Jason Kelce do over the last decade. He's also a force in the run game, both as a puller and with his agility to get to the second level and hone in on his targets.

If given the opportunity to bully defensive backs and toss them around, he will. He has a bit of a mean streak, and has been lauded for his toughness. He is also a good technician, as he is able to execute reach blocks with his suddenness at the snap. He is able to use his quickness to seal off defenders from running lanes.

What you won't see much of with Jurgens is the ability to move bigger defenders against their will. He's not a pile pusher in the run game, and he'll have to prove that he can anchor in pass protection.

The player most commonly comped to Jurgens, has been, well, Jason Kelce. In fact, Kelce himself even said that of all the centers he has watched over the last few draft classes, Jurgens is player who most reminded him of himself.

For the last three years, the Eagles have been using Jason Kelce to study film of center draft prospects.

“Of all the centers that have been compared to me…this is the guy. It’s him.“

Cam Jurgens was Kelce’s favorite player in the draft 👀🦅

Comping Jurgens to Kelce is boring, though, so I'll throw out another name. He reminds me a little of former New York Jets center Nick Mangold. First, their measurables:

Like Jurgens, Mangold was undersized, but athletically gifted. Here's an old scouting report of Mangold's from 2006:

There aren't too many centers that can move like Mangold. He has very good athleticism, can get out and pull, and blocks well on the move. He is a technician that rarely gets himself out of position. He gets out of his stance quickly and sets up immediately. He's tough and will not back down from anyone. His athletic skills give him the ability to play guard as well.

Mangold lacks the ideal size and strength to play center in the NFL. He has the frame to add more weight, and will have to do so to succeed in the NFL. He is on the lean side, and that combination of a lack of size and strength will give him fits in the league. He puts himself in great position but often loses out to bigger tackles because of his inability to drive them off the line.

Mangold has packed on some weight since the end of the season. He still needs to show he can carry that weight and use the extra power on the field. Mangold is an excellent center prospect, and will be the first center off the board.

There's a lot of overlap with Jurgens there.

Jurgens and Mangold both also each have their own food gigs. Jurgens sells his own beef jerky, while Mangold is a regular guest on food shows. I do this extra research for you out of love, friends.