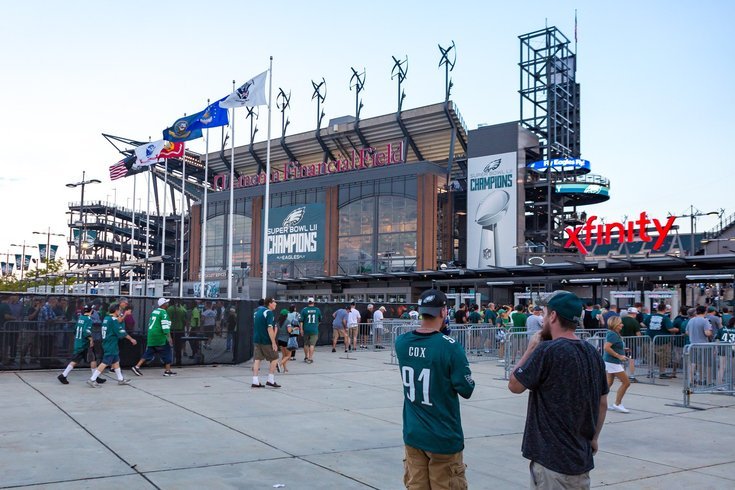 The Philadelphia Eagles are scheduled to play the Seattle Seahawks at Lincoln Financial Field on Nov. 24 on "Sunday Night Football." If the Eagles continue to struggle, that game could be flexed out of the prime time slot.

After the Philadelphia Eagles got wrecked 37-10 by the Dallas Cowboys on "Sunday Night Football," their future in prime time this season may be in jeopardy.

Field Hawk, the SBNation blog for the Seahawks, believes the Eagles' Week 12 home game against Seattle is on course to be flexed out of "Sunday Night Football" on Nov. 24 in accordance with the NFL's flex scheduling rules.

The obvious implication here is that the Eagles are not a good or compelling team, and they are not likely to bounce back from their recent downslide:

Philadelphia is 3-4 and on the ropes. Over the next three games, they will be (at) the 5-1 Buffalo Bills, home to the 3-3 Chicago Bears, and home again versus the unbeaten New England Patriots. Two seasons removed from winning the Super Bowl, the Eagles are in massive trouble.

If they can’t fix themselves, then there’s no way Seattle at Philadelphia remains on NBC, and it’ll be moved back to 1 PM or 10 AM. [Note: these are Pacific times]

Between Weeks 5 and 17, the NFL has the ability to flex two afternoon games (the 4:25 EST slot) into "Sunday Night Football," with an announcement to be made no later than 12 days before the game.

In order to justify booting the Eagles-Seahawks game, the NFL would have to identify a game with higher stakes for that time slot.

They'll have two to choose from in Week 12: Green Bay at San Francisco or, much worse for Philadelphia, Dallas at New England.

For all we know, the Eagles could get on a roll and take down each of their next two opponents before heading into the bye week. That would put them at 5-4 before meeting New England at home, and by then a decision about the Seahawks game would already have been made.

All hope isn't lost for the Eagles this year, but the fact that the idea of a possible flex is even out there is proof that the team's perception in the NFL world is at a low point.