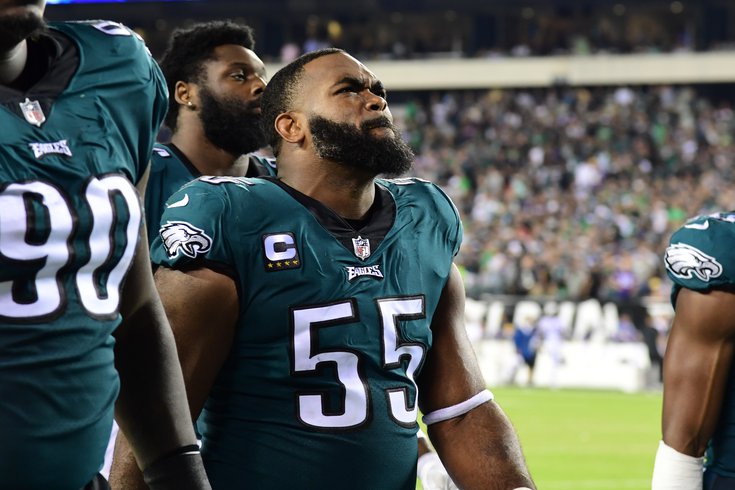 Brandon Graham had 2.5 sacks on just 27 snaps on Sunday.

In their Week 3 win over the Washington Commanders, the Philadelphia Eagles played 70 snaps on offense, and 77 on defense. Let's just get right to the snap counts, and some notes.

Analysis: If the season ended today (it doesn't) Hurts would probably be the MVP of the league.

Analysis: One of the only things the Commanders did well on Sunday was bottle up the Eagles' rushing attack. The Eagles ran it 30 times for just 72 yards (2.4 yards per carry), and Scott was stuffed in the end zone for a safety.

Analysis: Goedert came out at one point with a shin injury, and Calcaterra had a 40-yard catch and run in his absence.

Analysis: Dickerson came out at two different points during the game, and did not finish. Leading up to the game, he was listed as questionable with a foot injury.

Analysis: Graham's 2.5 sacks are all the more impressive now knowing that he only played 27 snaps.

Analysis: Reddick got on the board in the sack column, collecting 1.5 sacks.

Edwards and White have been a really good tandem over the first three games. The Eagles have good wide receivers and linebackers? That's unpossible.

Analysis: One of the overlooked plays in Sunday's game was Avonte Maddox stoning a tight end in the middle of the line on a shovel pass. Maddox is 5'9, 183, but he plays bigger.

Slay came out for a bit and was replaced by McPhearson.